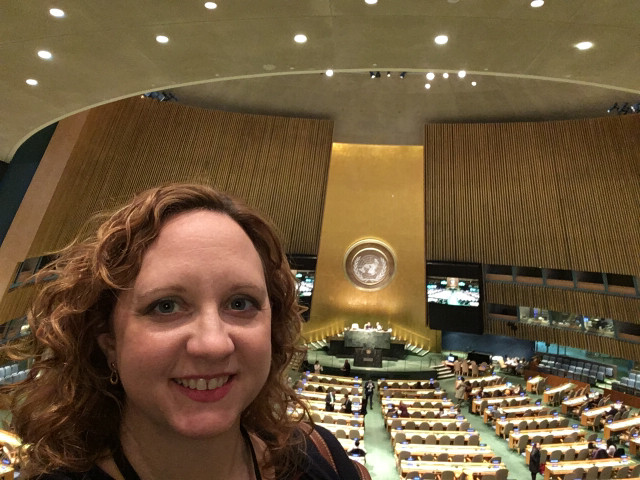 ‘As an International Affairs student I participated in Model U.N. (United Nations) at RHS as well as an undergrad at George Washington University, however this was my first trip to the U.N.,’ Sylvester said.

‘Instead of role playing as a country or delegate, I was there as an actual delegate.’

Sylvester attended the 61st Session of Commission on the Status of Women last month at Washington D.C. She represented Zonta International (ZI), a leading global organization of professionals empowering women.

As an NGO (Non-Governmental Organization) delegate she attended various events, programs, meetings and discussions regarding women’ rights around the world.

‘I had a ground pass which allowed me to directly interact with Member States (countries that have representatives at the U.N.).’

Sylvester not only attended the meetings, as the ZI, District 15 Advocacy chair, she was able to be part of the discussions.

‘I attended a panel discussion with governmental representatives of Slovakia and the Council of Europe,’ Sylvester said. ‘This panel discussion took place at U.N. Headquarters and discussed (their) coordinated response to end violence against women would be. Because of my credentials I was able to provide input. So I explained ZI’ ‘Zonta Says No’ campaign.’

‘Zonta Says NO to Violence Against Women’ is a Zonta International campaign to raise awareness of and increase actions to end violence against women and girls around the world.

The campaign, which began in November 2012, features the service and advocacy actions of Zonta clubs and districts to prevent and end violence against women and girls in their local communities.

As a ZI delegate, Sylvester found herself getting up close and personal with some of the visiting dignitaries.

‘With Zonta International, we had a program with the First Lady of Zambia discussing economic security and the workplace. We ended up following the crowd out of the building. It was late in the evening and we realized we were leaving with the First Lady.’

Sylvester explained that the Zambian delegates were exiting through the official U.N. delegate exit when she realized she should be using the public exit.

‘We politely smiled and chuckled that we were going the wrong way,’ Sylvester said. ‘They let us exit there. We just acted like we were supposed to be there.’

While she couldn’t attend the entire 11-day event, Sylvester was able to bring home some solid ideas.

‘There are a lot of good organizations working to improve women’ lives around the world. It was an honor to be there and to fulfill a lifelong dream.’

Closer to home, Sylvester worked on an Equal Pay Day Rally to be held in Lansing during Michigan’ Equal Pay Legislative Day April 25.

Sylvester is the Regional Outreach Officer for Elijah J. McCoy Midwest Regional U.S. Patent and Trademark office in Detroit. She in Gaylord. Her parents, Don and Anna Sylvester, live in Roscommon.