History of the Hale Baptist Church 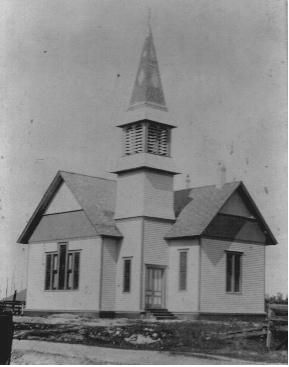 Prayer meeting on Wednesday evenings were well attended in those days, as well as other services of the church, in fact the church was the social center of the township.
The first wedding in the church was that of Effie Carroll to James Daly on March 29, 1893. The first funeral, that of little Addie Buck, daughter of Henry and Ella Buck.
The record of the early church down through these early years show discouragements and worry. The small indebtedness loomed large in those days of small wages and hard times. The members were well grounded in their faith and worked together in peace and harmony. What differences occurred came from without. As one looks back through the years one can understand and see more clearly why there had to be misunderstandings at all between those fine people.
I know now that when the people entered into the building of a church with such enthusiasm, they expected it would be a Union Church. They all favored some certain denomination and when the Baptist took over, they could not understand why it should be under one denomination. On the other hand the church could not have been completed as it stands today without the help of C. H. Prescott’s money.
One Christian brother, Danny Latter of Reno was loved by all and when he came to preach at Hale every one turned out. Later he was ordained a Baptist minister and died in the far West.
The Baptists have no bishops or organization to place pastors in a field, they are chosen by the church. We often had changes principally because the field was too hard to cover and often because a young man sought a place where he could have a larger salary.
As the years passed this matter was helped by a more business like arrangement by the Baptist State Board. This is hard to understand by people from other denominations. One can be proud of the democracy of the Baptist Church, but in regard to the uncertainty of a minister’s pastorate, it is not so well.
In 1898 during the pastorate of Rev. John Pearson the debt was reduced but due to his ill health he had to leave for a different climate. Under him Danny Latter helped out again during the summer of 1899, and preached here until the fall of 1900, when he resigned to take up missionary work in Idaho. In 1901 the church was fortunate in again having Rev. John Pearson as pastor and continued with the church three years. He also preached at Curtisville and churches north following Rev. Nunn’s blazed trail, three slashes in a tree.
Many have gone forth into the world from the Hale Sunday School and Church. There is not much to hold people there, so the young people leave us but no one can tell of the good that has been accomplished. Membership may remain about the same but many have gone forth and joined other churches. The good work goes on. No one but our Heavenly Father can judge of that.
Story courtesy of www.USGennet.org. Written by Historian Nellie Jennings.

The Hale Lions Club will be hosting the Easter Bunny at the Victorian Cafe on April 3rd from 11 - 2Thank you for all...
Read more
Iosco Features

St. Pius X Catholic Church was the site of the Community Day of Prayer April 22. A number of area churches participated in the...
Read more
- Advertisment -