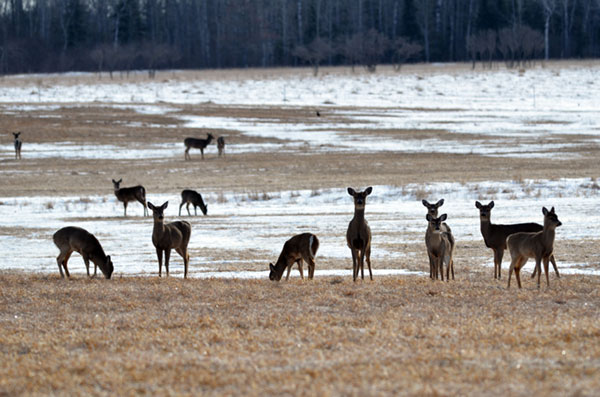 Having gone through several iterations since its creation in 2015, the Upper Peninsula Habitat Workgroup re-emerged recently after a months-long hiatus, with several new members, but an unchanged focus – to conserve and improve deer wintering habitat across the region.

Where U.P. deer migrate to survive winter, they gather in large numbers on only about 30 percent of their overall geographic U.P. range, making these areas especially important.

During the early part of the last decade, a period of three consecutive severe U.P. winters, coupled with a subsequent decline in deer numbers, heightened concerns about habitat conditions in deer wintering complexes, especially winter shelter.

The workgroup was formed and since, deer wintering complexes have been identified and mapped, and deer habitat improvement projects have been planned and conducted.

The workgroup also has been contacting private landowners, urging them to join the campaign by exploring habitat improvements for deer on their lands and getting help from local foresters to craft forest management plans on those deer wintering complex properties they own.

To help improve habitat conditions for deer, the Michigan Department of Natural Resources needs help. Of the 10.6 million acres of land in the U.P., only roughly 20 percent is managed by the state.

At a recent meeting, member Stu Boren said the workgroup has identified 4,500 acres of potential sites for forester land improvement visits, which are widely dispersed across the Upper Peninsula.

“We’ve got a good complement of people we need to reach to yet,” Boren said.

Combining the voices of the DNR’s Wildlife and Forest Resources divisions with those of forest industries, working through the group, has proven to be more beneficial than those entities trying to communicate messages on their own.

One issue these parties have been working on is an increase in cedar timber cutting occurring on state-managed lands in the southern U.P., where estimates indicate about half the annual buck harvest comes from.

Issues like this can be thorny, with apparent cross-purposes at work, but the membership of the workgroup has sought to diplomatically produce valuable solutions.

Grants and seed money provided by organizations have helped affect hundreds of thousands of dollars of habitat improvement work across the region. The group also has made recommendations to the DNR over the years on land acquisitions that would provide favorable wintering habitat for deer.

Stacy Haughey, DNR U.P. field deputy, has worked as a department contact with the workgroup since its inception.

“I have appreciated watching this group, with so many segments of the habitat conversation, really come together and work together to make a difference on the landscape,” Haughey said. “I appreciate the dedication and outcomes this partnership has created.”

The workgroup operates at the discretion of the Michigan Natural Resources Commission – the governor-appointed seven-member body that sets hunting and fishing regulations for Michigan.

The commission makes appointments to the workgroup and is provided regular updates on the group’s work and progress.

“I can’t say how much this workgroup has meant to us here in the U.P.,” said J.R. Richardson of Ontonagon, a driving force on the workgroup and one of two NRC members representing the region.

Richardson sees the group as a vital interloping factor between the region’s deer herds and the ravages of winter. He said the work of the group also helps benefit ruffed grouse and other game and while species, while managing our forests in a sustainably responsible manner.

Louise Klarr, another NRC commissioner, serves on the workgroup, while Dave Nyberg – the NRC’s other U.P. representative – also attends meetings of the group, though he is not an official member.

Through retirements and shifting appointments, the workgroup’s ranks have changed significantly since its formation.

“Even though we have a tremendous amount of change, the mission remains the same and that’s deer wintering complexes in the Upper Peninsula,” said Jim Hammill of Crystal Falls, another chief leader in the habitat workgroup and retired DNR wildlife biologist. “There’s really a lot of positive interest in what we’re doing.”