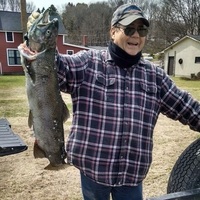 Steven was born in Pontiac, Michigan on March 6, 1953 to Jack and Shirley (Stormer) Shastal. He moved to Mio in 1974 from Pontiac. Steven worked as a heavy equipment operator and truck driver for MDOT, retiring in 2003. Steven was a member of the Comins Eagles and enjoyed hunting, fishing, side-by-side riding, and spending time in the U.P. He especially enjoyed spending time with his family.

Visitation on Wednesday, June 29, 2022 from 1 – 4 PM and from 6 – 8 PM at the Lashley Funeral Home, Mio, MI, and again on Thursday, June 30, 2022 from 1 PM until Funeral Services at 2 PM with Pastor Lowell Eastman officiating. Interment will follow at Kittle Cemetery, Mio, Michigan.