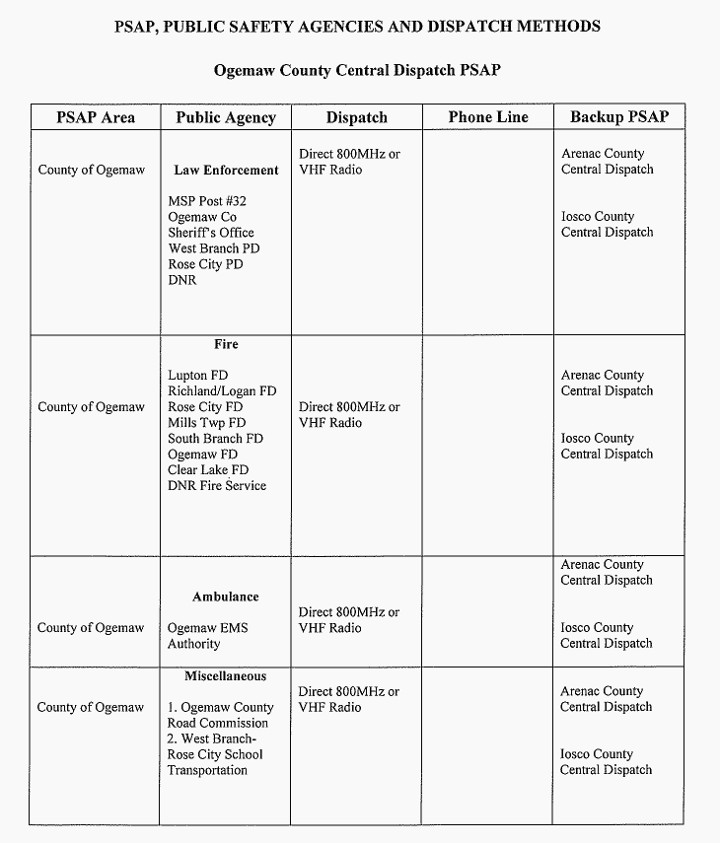 OGEMAW COUNTY – One minute we were sitting around the kitchen table, and the next minute you find yourself calling 911. When someone stops breathing, you’re desperate to get help. What if 911 wasn’t there? What would you do?

There is a shortfall in funding for Ogemaw County 911. Cellular telephone and landline surcharge fees, as well as money from the Ogemaw County General Fund haven’t been sufficient to support the service. The question now is what will the county do?

In anticipation of the 2018 budget shortfall, last October the board sent every township, city and the EMS a bill for the shortfall. They have until this October to pay the bill. Two townships have already paid the invoice, and the remaining townships have received significantly reduced bills.

The situation is made even more dire, according to County Chairman Pete Hennard, since the county has had to cut $180,500 out of the general fund to cover 911 expenses over the past four years, causing the elimination of the county road patrol. An agreement to allow the Michigan State University Extension Office allows it to run until a millage to operate that department is passed this fall.

The controversy over the bills did open communication between the county and townships about how to fund the department however.

At a Jan. 25 special meeting of the county board, 9 of the 12 township officials in attendance indicated they want to see the county’ central dispatch operation become an authority. But that option will cost taxpayers an additional $80,000 annually.

Currently, 911 service is funded in part by a local surcharge of $1.35 per cell and/or landline phone. No local or state surcharge fees are received from prepaid phones or when cell phones are purchased from another county. The state does issue the county about $125,000 annually to offset the anticipated loss of revenue.

Regardless, after technology upgrades, equipment cost and improvement to outlying townships, the department runs with a negative balance of $56,914.75, thus the need for the millage.

Hennard did note that combining services with another county, such as Roscommon, would be the cheapest alternative, but indicated the board didn’t sense any support for that option.

If approved, the 3/4 mill proposal would be scheduled to appear on the November 2018 ballot.

Additional cost for homeowners would be about $37.50 annually for homes with a taxable value of $50,000. The millage would generate about $624,000 annually.

Funding and operations of 911 is expected to be discussed at the next meeting of the Ogemaw County Board of Commissioners, which is scheduled for Feb. 14.