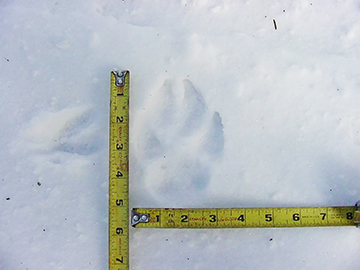 NORTHERN MICHIGAN – The Michigan Department of Natural Resources’ citizen-based northern Lower Peninsula wolf survey, to detect the presence of gray wolves in the region, will take place Feb. 19 through March 15.

“The probability of DNR personnel observing an actual wolf or its tracks in the northern Lower Peninsula is very low,” said DNR wildlife biologist Jennifer Kleitch. “It’s helpful to have as many eyes as possible looking, so public reports are important for this survey.”

Wolves began naturally returning to Michigan’s Upper Peninsula through Canada and Wisconsin in the early 1990s. Since that time, the population has increased and now occupies suitable habitat throughout the U.P. While the Straits of Mackinac is not an absolute barrier for wolves moving from the U.P. to the northern Lower Peninsula, it is a significant obstacle, especially when there is not complete ice cover.

The first observation of a gray wolf in the northern Lower Peninsula in recent times was in 2004, when a wolf was accidently killed in Presque Isle County. In 2014, the presence of a gray wolf was identified through genetic analysis of a scat sample collected in Emmet County. The DNR would like to gather further information to determine wolf presence in the northern Lower Peninsula.

If you see a wolf or wolf sign between Feb. 19 and March 15, please call the DNR Atlanta Field Office at 989-785-4251, ext. 5233 or report sightings online through Eyes in the Field, found at Michigan.gov/EyesInTheField.

Reports will be recorded and potentially investigated if recent sign is present. Priority will be placed on reports north of M-55.

“It’s important that observations are reported in a timely manner so we can work with fresh sign. Those who find what they believe are wolf tracks should preserve the physical sign and take a photo of the tracks with a ruler in the frame to indicate size,” Kleitch said. “We’d also be very interested in any recent pictures of a wolf in the Northern Lower Peninsula.”

Information on wolves in Michigan and links to other wolf-related web pages can be found at Michigan.gov/Wolves.