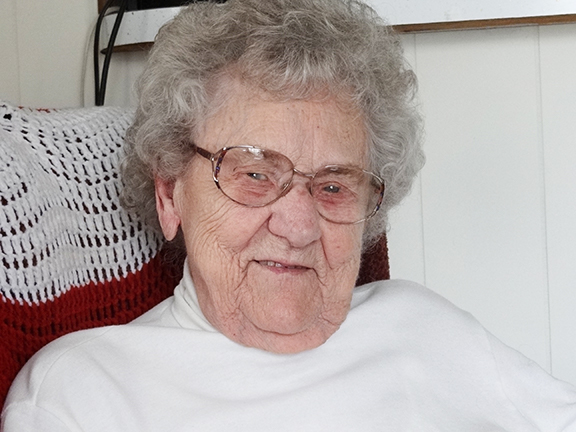 Gayle L Miller  and I interviewed and wrote the story of Dilly several years ago, as a tribute to Dilly we would like to share that with you now.

Born July 9, 1921, Delores “Dilly” Craft Shore has made a lasting impression in Ogemaw County. Dilly was one of 14 children born to Urban and Alvina (Beck) Craft.

Dilly married James Shore on October 14, 1939. James was drafted into the service in April 4, 1944 leaving Dilly home with two small children. James and Dilly were living in Detroit at the time and Dilly came back to West Branch with the babies. James came home in 1946. Dilly and James then cut wood while working for Herb Resteiner and built the cozy house that Dilly still lives in.


About 1950, James became very ill with what ended up being MS. He was only 26 years old. James lived at home with Dilly and their four children. Dilly says “he lived so long because I kept him at home and cared for him. Dilly was working at Taylor Door and had to pay people to help her so she could work. Some people were good and honest, but others were not.

Every summer Dilly, James and the children would take a vacation. They went to every state in the Union. James was paralyzed up to his neck, he never moved a hand or arm for 25 years, but the family went on wonderful memorable vacations. When James passed away on April 7, 1989, he was 71 years of age. The VA at the time said he was that oldest MS patient they knew of. Dilly spent hours taking care of and loving her husband. Dilly said James never had any kind of bedsore and credits her care and Lysol, not the kind you clean with but the kind you get at the pharmacy. Every time she washed him, she would put a drop or two of Lysol in the water. She told us be sure not to use the kind you clean with.

Dilly started volunteering at Tolfree Hospital on June 15, 1989 a few months after James death. She worked at the hospital as a transporter, she ways “I take people out, I take paper work to all the departments. I love it!! “When Dilly was 90 years old, she was volunteer of the year. As of October 2013, Dilly had been there more than 24 years. Dilly is/was a member of the Sheriff’s Posse and could often be seen working all day at the fair and other events.

Dilly and James were blessed with five children, 20 grandchildren and 47 great grandchildren. Dilly is extremely proud of her family and pictures on the walls and tables in her home show that.

We asked Dilly about the Purple Gang because she grew up in Lupton this is the story. She told us: “I worked there! I’ll tell you how it all started. Mr. Gelfand, he was One Armed Mike: he was from the Purple Gang in Detroit. They figured Lupton was a good quiet place to hang out, so they built the building and it had the biggest dance floor.

After they built the big building on the end, they had to build another small building because they could not have liquor or beer. After about 5 years the state voted and passed a law that said they could have alcohol. So, the building on the back was used for the bands when they came up to play the Graceland. They were high classed bands from all over. So, after the new law they went ahead and made the Graceland a dine and dance.

I worked for Mike and Grace taking care of their little boy. They must have figured I was smart enough, so they had me selling dance tickets at the door. There was a big machine gun in the top of the Graceland even back when I worked there. (We figure about 1933, she was 12-13 years old.)

I rung that buzzer and Mike Gelfand came running up with his gun and fired it one time at the ceiling. Everyone hit the floor. The lights went out. We had no power. The Graceland had a power plant run by several big motors out back and those guys giving me trouble had gone and blown it up. Someone called the police but by the time they got there everyone was gone”.

When asked more about the Graceland Dilly said, “The furniture was made of logs. It was heavy to move the tables and when I was cleaning, I would often find money tucked into the logs of the chairs. One time I found a $5 bill, but usually it was just a dollar. That was a lot of money back then and I never told Mike about it.”

After the Bar was put into the big building (Graceland) they also had wrestling, basketball, and other events. Dilly’s job at the time was to clean the floors. She had a big long “thing” filled with rocks and it had wool on the bottom. The rocks were for weight. She would pull it back and forth on the floor and the floors would shine.

When asked her favorite memory of the Graceland she said it was: THE MUSIC! The music was fantastic and that is where I learned to dance. The band boys used to say, “Come on Dilly” and she would dance. The only band name I remember was the Wagman Orchestra.

We really enjoyed our time spent with this charming, caring woman. She was so gracious, and we felt very honored to have been invited into her home. I just learned in February 2015, that Dilly is still volunteering at the West Branch Regional Medical Center.