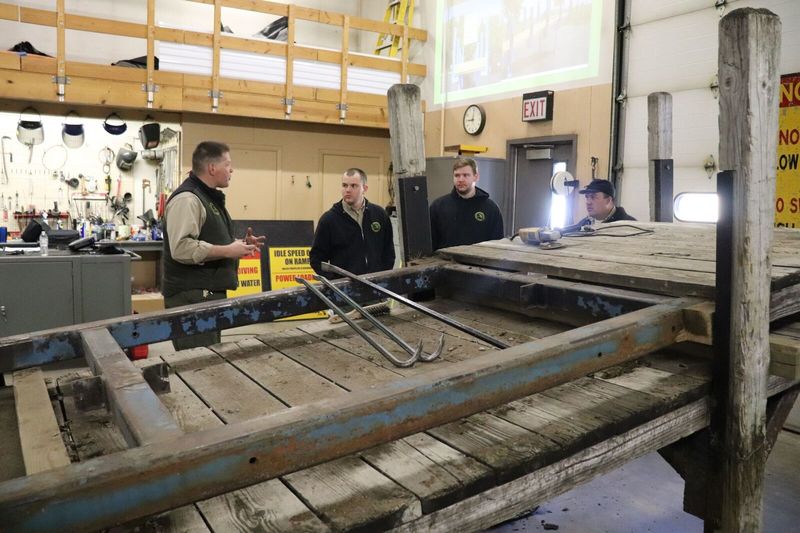 REGIONAL – When the Michigan Department of Natural Resources (MDNR) Parks and Recreation department hires new rangers for the State Parks, they have traditionally attended law enforcement training. This year, they will also receive training at a new four week Ranger Skills academy.

Josh Pellow, manager at North Higgins State Park as well as for the Grayling Construction Crew, was on hand at the training at Grayling. In one room, students were having classroom instruction on how to drive and back a trailer along with the different hitch and ball types they might use during their employment. Later in the day they will be on a driving course putting their knowledge to the test.

In an adjacent garage stall, students were learning how to build a vault toilet. In the next garage, others were learning about skid piers. After some instruction, they would begin tearing off old boards, grind down the metal frame and prepare it for painting. Another pier was nearby ready to be redecked.

‘This is the first year we’ve had a four week Ranger Academy like this,’ Pellow said.

‘Even with it being day two, it is truly great to see their awareness and ability increase.’

‘In the trailer course a student came to me and said ‘I don’t back trailers up’. By the end of the day they were very comfortable around the driving track,’ he related.

‘It’ nice we have the break-out sessions. The students will definitely be able to be better assets to their State Parks.’

‘It’ a lot easier to learn doing hands on stuff,’ he said.