TRAVERSE CITY — For the entirety of their careers, and in multiple roles, Byron Center’s Leroy Hackley Jr. and Traverse City’s Patti Tibaldi have been immersed in improving educational athletics. To celebrate their continued dedication and contributions over the years, Hackley and Tibaldi have been named honorees for the Michigan High School Athletic Association’s Charles E. Forsythe Award for 2021.

The annual award is in its 44th year and named after former MHSAA Executive Director Charles E. Forsythe, the Association’s first full-time and longest-serving chief executive. Forsythe Award recipients are selected each year by the MHSAA Representative Council, based on an individual’s outstanding contributions to the interscholastic athletics community.

Tibaldi spent 40 years in educational athletics at Comstock Park, Grand Rapids West Catholic and Traverse City West and also Aquinas College in Grand Rapids, serving as a coach, athletic director and physical education specialist. Hackley has spent the last 22 years of more than 40 in sports as an athletic director at Byron Center, Jenison, Grant and currently Muskegon Orchard View, as well as serving as an MHSAA-registered game official for 37 years. Both are recognized statewide among the best in their various fields.

“Patti Tibaldi has given more to athletics in our state at the small college and high school levels than perhaps anyone over the last 40 years,” MHSAA Executive Director Mark Uyl said. “She was a pioneer in small-school college basketball at Aquinas College, and my wife Marcy played against her there, and 30 years ago you could see that passion for women’s sports that was unmatched. During her time at Traverse City West, her passion for kids was unchanged, and most of her students had no idea she had been that pioneer. She was a trailblazer for women in leadership positions in coaching and administration.

Tibaldi spent 40 years in education and athletics at the high school and college levels, beginning first at Comstock Park from 1973-75 before spending the next six years at Grand Rapids West Catholic where she led the girls basketball team to the Class B championship in 1979 and the softball team to four league titles.

Simultaneously for the final three years at West Catholic, Tibaldi also served as women’s basketball coach, then also softball coach at Aquinas College, where she also became assistant athletic director in 1981. While at Aquinas she led the Saints to a 340-136 record on the court and the National Catholic Basketball Championship in 1984.

Tibaldi then moved to Traverse City Area Public Schools, first as the district’s K-12 physical education coordinator but eventually in multiple physical education specialist roles. She also was named the first varsity girls basketball coach at the new Traverse City West High School from 1997-2001 and served as West’s athletic director from 2004 until retiring in December 2014. As coach, she led the Titans to seven league and multiple District championships and the final few hundred wins of more than 800 total on high school and college basketball courts.

She’s also played a prevalent role in helping make MHSAA policy over her decades. She’s served on a variety of MHSAA committees, including the Basketball Committee, and served in multiple roles with the Basketball Coaches Association of Michigan including as president. She also served at the collegiate level on the NAIA Executive Committee, the Wolverine-Hoosier Athletic Conference (WHAC) Executive Council and as part of NAIA Women in Sports Leadership program and the Michigan Women’s Foundation Tribute to Women Athletes Committee.

“To me, teaching life lessons is everything,” Tibaldi said. “I had great kids, and it makes me proud to see where they’re at – the things they’re doing are mind-boggling, and it makes me really proud. The thing they all tell me is they learned what hard work was, about teamwork and persistence, and resilience. That to me is what’s valuable.”

Tibaldi also co-authored and was granted a $1 million federal grant as part of the Every Step Counts program to provide the Traverse City community with funds to fight obesity, and wrote and coordinated a USDA-funded Michigan Fitness Foundation grant for promotion of healthy school environments in five high-needs schools. She’s been an active volunteer with the Boys and Girls Club and presented at the annual Girl-Tech Conference to encourage young women to choose non-traditional careers. She continues to do work with the Michigan Fitness Foundation.

Tibaldi is a graduate of the former Redford St. Mary’s High School in Detroit and earned her bachelor’s degrees in English and physical education from Aquinas in 1973. She was named Aquinas’ Outstanding Alumni of the Year in 1995 and is a member of that school’s Hall of Fame as well as Grand Rapids West Catholic’s  and the Grand Rapids Sports Hall of Fame.

Other regional recipients of the award:

Past recipients of the Charles E. Forsythe Award

FUTURE CC Commission on Aging
10:00 am

Chamber of Commerce for Oscoda Meeting 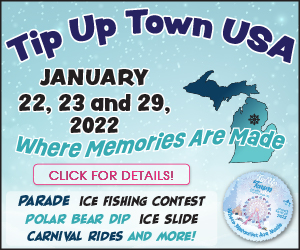