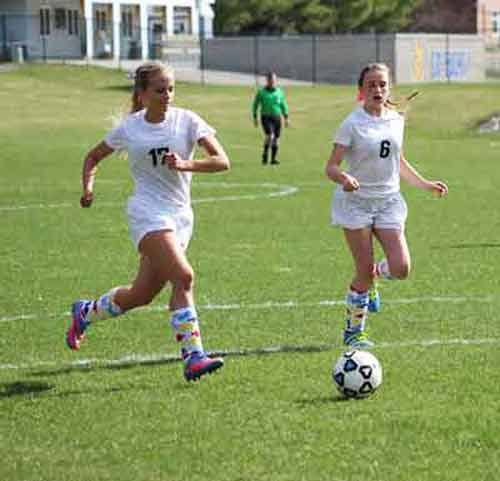 ROSCOMMON — It was a busy couple of weeks for the Roscommon girls soccer team as the Lady Bucks played five games in 11 days. But it was a highly successful one as well, with the Lady Bucks winning four out of the five and improving to 5-4 overal and 4-3 in the Jack Pine Conference.

The first game was against Burt Lake NMC on Tuesday, April 26 and the Lady Bucks rocked and rolled, cruising to an 8-0 victory that was never in doubt after Roscommon scored just seven minutes in when Lillie Meadows took a cross from Kaeley Hahn and sent a shot past the keeper.

Sydney Blanchard would add another goal a short time later, ripping a long shot from the right side to make it 2-0 and then Morgan Thomas crossed to Bettinna Kagerer who successfully converted as the Lady Bucks entered the half with a 3-0 cushion.

Lauren Shores controlled a loose ball in front of the net and pounded a shot past the keeper to make it 4-0 for the Lady Bucks three minutes into the second half. Kagerer scored her second goal of the game at the 12-minute mark, Peyton Church put a loose ball into the net with 13 minutes left and Hahn netted the last goal on a rebound that ended up at her feet.

Just a couple days later the Lady Bucks had a rematch with Burt Lake on April 29 and blanked them, 7-0. Paige Patterson, Church, Meadows, Shores, Lexus Dankert and Hahn all had goals for Roscommon.

Roscommon lost to Houghton Lake, 4-1 on May 2 but rebounded with a 2-0 victory over Oscoda on May 3 with Maleah Wooten and Thomas scored the goals. The Lady Bucks then topped Big Rapids Crossroads Academy, 3-0 on May 6.

The Lady Bucks outshot the Lady Cougars, 26-5. Roscommon opened the scoring when Blanchard’s shot hit the crossbar and bounced back to Hahn who deftly drilled the ball into the back of the net.

“This has been a good stretch for our team,” Roscommon coach John Sinnaeve said. “I have seen a lot of improvement by everyone on the team. Our defense, passing and going to the ball has all improved.”