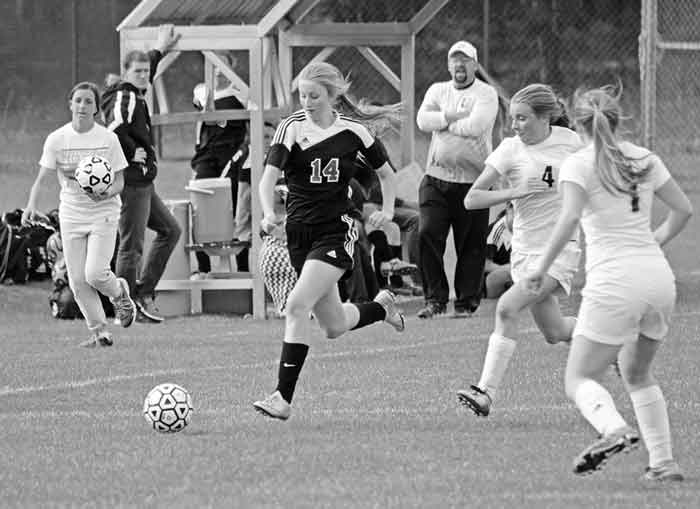 CARSON CITY — After a slow start the Houghton Lake girls soccer team gradually picked up steam and powered to a 5-0 blanking of Carson City Crystal’s Lady Eagles in a non-conference game on the road.

Maybe it was the long bus ride that bothered the Lady Bobcats, but they experienced trouble getting their shots to find the back of the net despite putting themselves in position to have several solid opportunities in the first half.

For some reason their shots were off the mark which allowed the Lady Eagles to stay in the game which was a dangerous risk. When their shots headed toward the net, Carson City’s keeper frequently got her hands on the ball to keep it from finding an opening.

But the Lady Bobcats felt confident that they’d eventually prevail since they were dominating the play in the first half and they didn’t allow their inability to score get them down. They kept plugging away until they finally broke the scoring drought when Lexi Blanchard got the ball to Allie Sajdak free in front of the net and she crushed a shot past the keeper for a 1-0 lead at the half.

“We struggled the first half and missed some good chances,” Houghton Lake coach Darren Barnes said. “We’ve got to come out of the blocks faster. We looked sluggish.”

The Lady Bobcats (7-3-1) came out of the blocks fast in the second half and scored two goals in the first five minutes which pretty much settled the issue despite the time remaining. Blanchard set up the first goal when she intercepted a Lady Eagles’ pass, negotiated the ball past a defender and with hardly a sign of emotion buried a shot to make it a 2-0 game.

The next goal came about as the result of a through ball from Callee Akin to Alexis Souder that she easily rolled into the back of the net. Just a short time later Souder struck again this time controlling a pass from Blanchard and sending the ball into the lower corner of the net.

And the hits just kept coming for the Lady Bobcats as Blanchard found open space and received a laser pass from Allison Rose as she raced up the field on a blitz attack that resulted in a shot that beat the keeper.

Sarah Barnes put a shot on goal that the keeper spilled out and Souder controlled for her third goal of the game and a hat trick. Ellie Connett made five saves in goal to record the shutout.

“We really came out and played well in the second half,” Barnes said. “I was glad to see us turn it around and played like we are capable.”

In a battle for first place in the Northern Michigan Soccer League the Lady Bobcats defense held fast under tremendous pressure from the Roscommon Lady Bucks keeping them off the board throughout the first half.

Lainey Meigs broke a scoreless tie when she converted on a penalty kick awarded to Houghton Lake and the Lady Bobcats would take a 1-0 lead into the half.

Houghton Lake extended its lead to 2-0 less than five minutes into the second half on a goal by Meigs on a pass from Sajdak. Blanchard was fouled just outside the 18 at the 24:53 mark which gave the Lady Bobcats a free kick. Sydney Gandolfi nailed a shot into the upper right 90 to make it 3-0 for Houghton Lake. Roscommon scored on a penalty kick, but the Lady Bobcats answered almost immediately with a goal from Skylar Page knocking the ball into an open net for the final 4-1 score.

“We started out slow and nervous,” Barnes said. “Roscommon was more aggressive in the first 10 minutes. Then we started to play better and we created scoring chances and found the net. We beat a really good team and I am very proud of the team.”