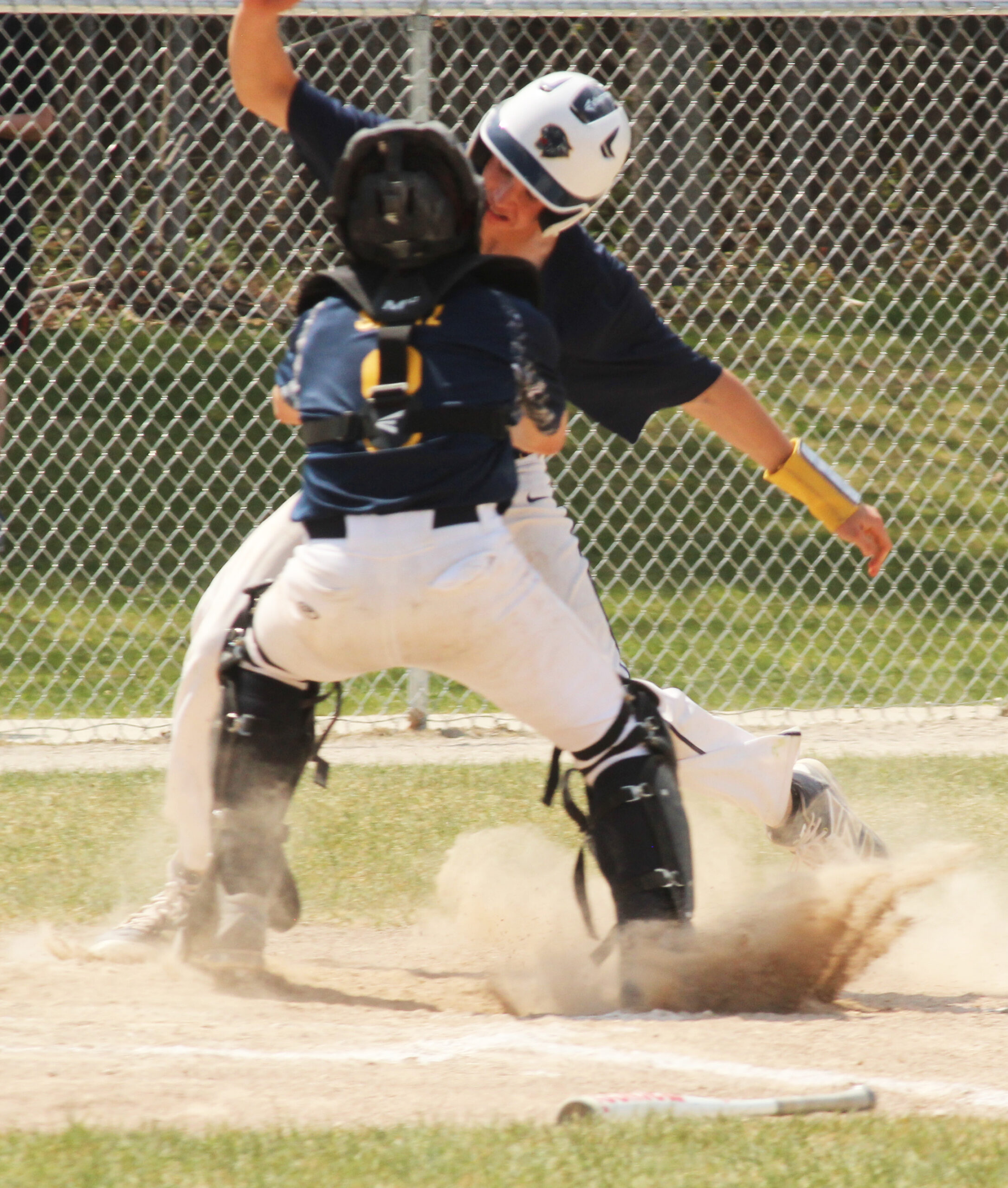 By Greg Gielczyk
HOUGHTON LAKE — Everyone has been having trouble with Standish-Sterling lately. And despite a first inning triple play, the results were the same as that of the last 21 teams the Panthers had defeated this season.

But Roscommon had it’s opportunities at the Houghton Lake Invitational tournament on Saturday, May 21.

After shutting out Grayling, 4-0 in the opening round, the Bucks were challenged to stop the Standish Sterling winning streak which had reached 21 games following an 0-4 start to the season, and they simply couldn’t unhinge them.

Gabe Stern was on the mound for the Grayling game and despite giving up six hits did not allow a run. He struck out seven and walked only three in easily one of his strongest performances of the season.

“He kept his composure when Grayling threatened to score and got out of some potentially big innings without giving up a run,” Roscommon coach Derek Smitz said. “Gabe threw strikes when we needed them and let the defense take care of the rest.”

Roscommon lost to Grayling, 8-1 in the title game and only Barnhart ended the game with more than one hit, going to 2-for-3 with a run batted in. Grant Smitz, Noreyko and Stern each had single hits.

“We had trouble getting things going (against Standish),” coach Smitz said. “Overall, we did not play a bad ball game. Our bats were flat. Standish has a strong team with good speed. With the bases loaded and no outs in the first inning we turned an inning-ending triple play that started with a leaping grab by Grant Smitz, who came down and threw to Trey Heliin at second who then threw home to Dane Smitz for a tag at the plate.

‘It will be a play that the ball players and fans will remember for the rest of their lives.”

-ROSCOMMON — After losing a one-run game in the opener of a Jack Pine Conference baseball doubleheader on Thursday, May 19 the Roscommon Bucks turned around and returned the favor in the nightcap.

The Bucks couldn’t come up with the one run they needed in the first game and wound up losing a tough 7-6 decision. But the tables were reversed in the nightcap as the Bucks pulled out a thrilling 6-5 victory.

Kaleb Keipert took the mound in the first game for the Bucks and threw a complete, six-inning game. He allowed only three earned runs, struck out five and walked only two. It should have been good enough to pick up the win but the Bucks betrayed his effort by giving away three unearned runs.

Game 2 was a different story for the Bucks who managed to hold off the Beavers with a great defensive stand in the seventh inning when they had the go-ahead run on base. Noreyko shut the Beavers down behind a stout defense that did not commit an error in the game.

Weston Dunsmore made the defensive play of the game for the Bucks when he held a Beaverton runner on third with a strong throw after a base hit. Stern came up with the game-winning hit when he lined a hard shot to left that sent Grantz Smitz racing home with two outs in the bottom of the seventh.

Stern had only the one hit but drove in two runs. Jacobs went 1-for-3 with a run batted in, Noreyko was 1-for-3 with one RBI while Grantz Smith and Dane Smitz each were 1-for-4 and Heliin was 1-for-3. Heliin pitched the first 4 2/3 innings and gave up three earned runs, three hits and two walks. Noreyko relieved him and pitched the final 2 1/3 innings and allowed one earned run.

The Bucks also split a doubleheader with Farwell, losing the opener 8-6 and winning the nightcap, 2-1 in another pair of tight ball games. Noreyko pitched an outstanding first game but did not receive any support. He did not give up an earned run, struck out six and did not walk anyone.

Grant Smitz was the leading hitter, going 2-for-4 with a double and one RBI. Stern had a home run and two RBIs. Also getting singles hits for the Bucks were Dane Smitz, Noreyko, Jacobs and Dunsmore who also had a run batted in.

Dane Smitz pitched the second game and allowed one earned run on six hits, did not walk a batter and registered eight strike outs. Jacobs paced the offense, going 2-for-2, while Grant Smitz and Keipert each had single hits.

Roscommon lost a doubleheader to Sanford-Meridian, 8-3 and 10-3 on Friday, May 13 in the completion of a twin bill that was suspended earlier that week. Grant Smitz was 2-for-4 with a double and one RBI to lead the hitting attack in the opener. Cole Barnhart took over from starting pitcher Heliin.

Grant Smitz was again 2-for-4 in the nightcap. Heliin had the only RBI. . Cole Barnhardt pitched the first game and went 2 1/3 innings while Stern threw the last 4 2/3.