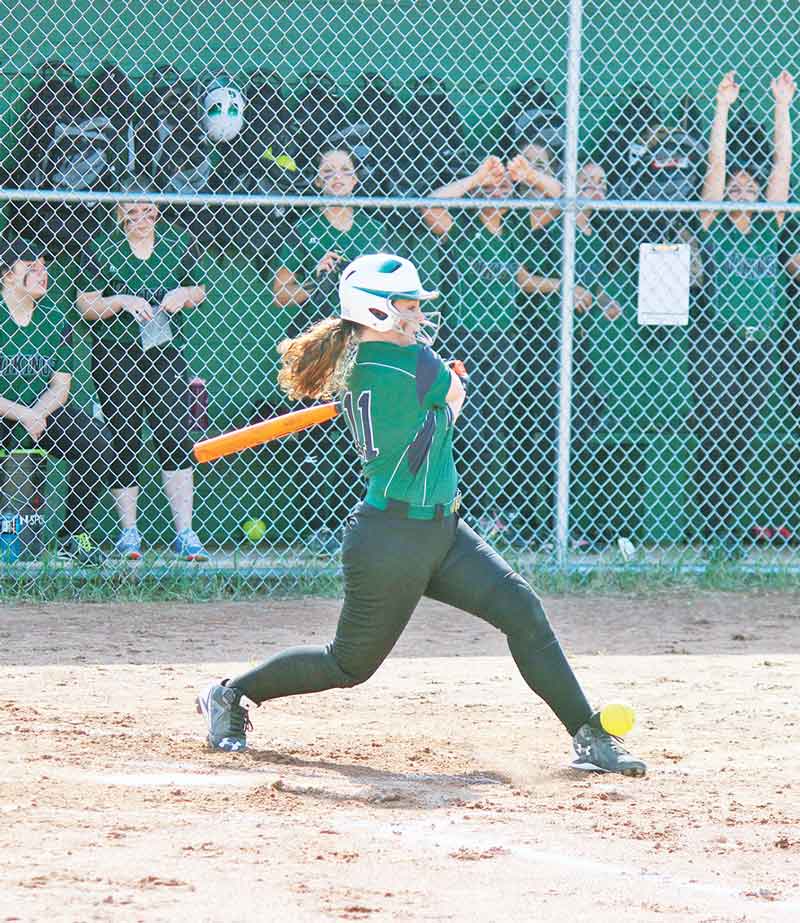 GRAYLING — After winning three out of four Lake Michigan Conference games in the last two weeks, the Grayling High School girls softball team were poised to gain sole possession of first place with a sweep of Kalkaska on Monday, May 9.

The Lady Vikings split a doubleheader with the Traverse City St. Francis Lady Gladiators on Thursday, April 28 winning the second game, and then came back with a sweep over the Elk Rapids Lady Elks on Thursday, May 5.

It improved the Lady Vikings’ record to 7-5 overall and 5-1 in the conference, where they are tied for the top spot with the Lady Blue Blazers which made Monday’s doubleheader a critical one with several more in the weeks ahead.

St. Francis ended the Lady Vikings’ undefeated streak in the conference with a 9-7 victory in the first game of their doubleheader.

Chrissy Bonamie was 2-for-3 with two doubles and a walk to lead the Grayling offense. Emma Prosser also finished 2-for-3 for the game with a pair of doubles. Maryn Burrall went 2-for-4 with a run batted in.

Sally Metiva pitched the first three ininngs for Grayling and gave up only one walk, had no strike outs and allowed two earned runs. Erin Prosser finished the game in the circle, walking one batter, struck out one and gave up four earned runs.

Grayling came back to win the second game, 13-7 with a big seven-run fifth inning that broke a 6-6 tie. Bonamie again was 2-for-3 at the plate and also drew two walks. Erin Prosser finished 3-for-5 with a double.

Shaelin Kraycs was 3-for-4 with a double. Mallory Hatfield pitched five innings for the win. She walked two and allowed two earned runs out of six. Metiva finished the game and gave up one earned run and one walk.

Emma Prosser also was 2-for-3 with a double, a stolen base and drove in a run. Her twin sister Erin was 2-for-2 with a walk, scored two runs and had a stolen base. Metiva struck out three, walked one in three innings pitched. The only run Elk Rapids scored was unearned. Erin Prosser threw two innings and struck out one.

Grayling won the second game 8-7 in walkoff fashion. The Lady Vikings trailed 7-3 going into the bottom of the sixth inning and scored five runs.

Bonamie went 2-for-3 with two triples, driving in the winning run in the sixth. Erin Prosser smashed a two-run home run over the left field fence, her second roundtripper of the season. Jackie Bulmer was 1-for-2 with a stolen base. Brittany Nelson finished 1-for-1 with a walk, two runs scored and a stolen base.

Kyla Roach pitched 2 2/3 innings with one strike out and three walks and four runs. Erin Prosser went the last 3 1/3 innings, striking out two, walking one and gave up three runs.

“It was a great team effort and an exciting win,” Grayling coach Mark Golnick said. “We’ve showed great character and a real sense of grittiness. They have short memories and they believe in each other. They’re an excitable group, so it’s a lot of fun.