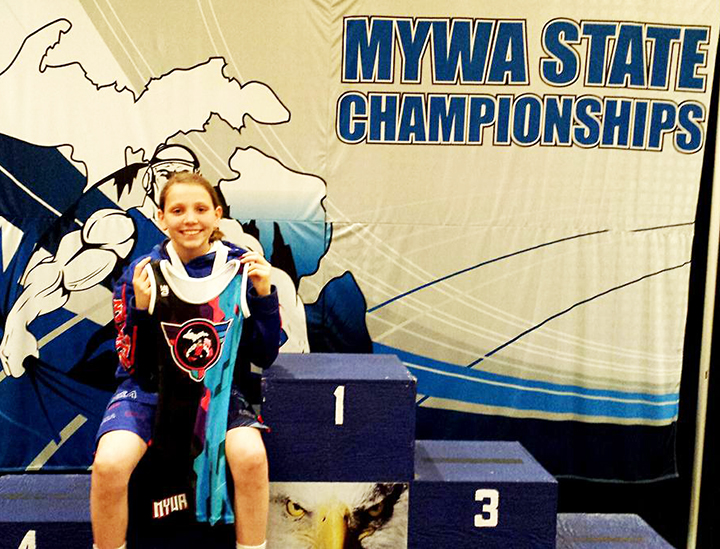 Wrestlers across the state who finished in the top four of their regional events had a chance to place in the top 8 grapplers in the state. The Grayling youth wrestling program had eight wrestlers earn state metals.

Grayling wrestlers earned a total of 33 wins for the day, 15 by pin.

Coach Claude Halstead was proud of his team.

“I am so proud of the 19 Grayling Youth Wrestlers that had the courage and dedication to step on the mats in Battle Creek over the weekend. To wrestle the best from all corners of Michigan for the State finals. I am at a loss of words to see these wrestlers work so hard and dedicate over 6 months of preparation, to see them do so well.
Wrestling is one of the toughest sports out there. These wrestlers are getting noticed by many other schools, some of which are Michigan’s Top D-1 programs. Congratulations to all of you.”

Mywa wrestling now has over 12 thousand kids in the state of Michigan competing. It is quickly becoming one of the biggest competitions in the country. Grayling is very fortunate to have the coaching staff and support from the local community that they do. To have a club with approximately 60 kids this year wrestling, having 19 go to Mywa State, and 5 competing in the All Girls State tournament is a phenomenal year.

‘These kids have worked diligently all year to make it through regionals to be one of the 32 finalists is an honor,’ Halstead said.

Of the 290 clubs throughout Michigan, only 10 had as many competitors at the State competition as Grayling did.

Halstead noted that Grayling has been a powerhouse in the wrestling community since Coach Don Ferguson created the current dynasty.

‘The great coaches we have today are coming directly from Coach Ferguson’s personal training over the years,’ Halstead said.