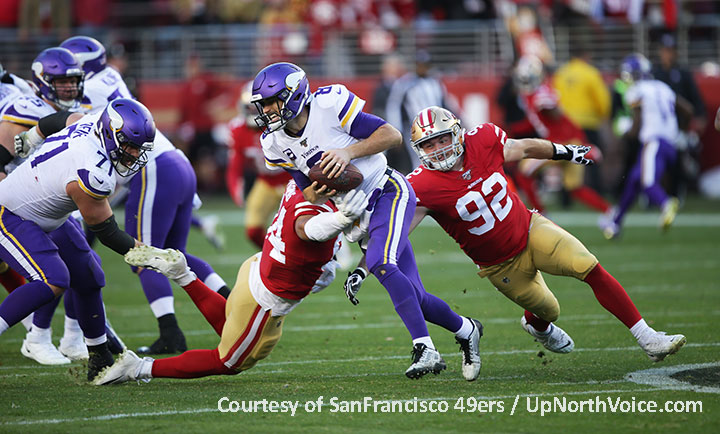 SAN FRANCISCO – Hard work. Dedication. Believing in yourself and your abilities. That is what has put West Branch’s Anthony Zettel at the pinnacle of the National Football League (NFL).

The 49ers advanced to the Super Bowl with convincing wins over the Minnesota Vikings (27-10) and Green Bay Packers (37-20).

Kansas City is a team with an explosive offense that features 2018 MPV Quarterback Patrick Mahomes. But Zettel, although respectful, is not intimidated.“We will do what we’ve done all year: Beat good teams,” he said. “We have a dominant team. We stack up well against him and the rest of their offense. (We) won’t change anything. We will do the right things and do what we’ve done all season to get here.”

Zettel said the training and preparation has been critical to the
team’s success.

“You come early and leave late, putting in in 11-12 hours a day. But it really goes quick with meetings and practice. Then everyone does their own thing. You need to take time to heal up.”

He said taking care of yourself is critical.

“You need to keep a consistent schedule so you can keep your body fixed. It is a well-oiled machine and you need to look at it like that.”

Evidence of his work ethic was on display in the 49ers National Football Conference (NFC) semifinal win against the Vikings When Zettel came crashing through the right side of the offensive line in the second half, he caught the ankle of a scrambling Kirk Cousins, teaming up with Solomon Thomas to cause a sack many local viewers thought he didn’t get credit for.

Despite putting in the work, Zettel was a man without a team for a short time before he had the opportunity to make his mark with the 49ers.

He later signed with the Cleveland Browns and the Cincinnati Bengals before landing with the 49ers as the team began its 2019 playoff run.

“Kris thought I would fit well into their scheme and wanted me here,” he said. “The coaches and the scouts watched my film and they thought they I could bring something that would help the team.”

When he arrived at the 49ers facilities in Santa Clara, California, he immediately took note of the difference between them and prior stops in his career.

“The culture here is a lot different,” Zettel said. “When guys expect to win everyone tries harder. Everyone is happy to practice and happy to play. Because of that you play your best. You learn to trust the guy next to you, and he learns to trust you.

“There is a reason why these guys are winning. They want to win. They expect to win.”

Aside from Zettel and Kocurek, the 49ers are a team peppered with former Detroit Lions including Alex Barret and Lincoln Thomas. Zettel said the chemistry is unique.

“Every team is a little different, but this team has amazing chemistry,” he said. “Everyone is doing what they have to because they want to. And it makes you want to work even harder.”

On a team mixed with veterans and young players, Zettel said one man stands out: Defensive Back Richard Sherman. A former member of Seattle’s “Legion of Boom” defense that won the 2013 Super Bowl, Sherman brought athleticism and intangibles to the team in 2018.

“What a great guy. He’s been through it all. He said ‘You always need to be ready to take advantage of the opportunity. You don’t know when the big plays are going to happen, but they will. So, don’t be startled and do everything you can to prepare for it.’

“He’s an unbelievable leader. He knows how to win.”

To help celebrate the milestone, Zettel had part of his family travel to San Francisco for the NFC title game.

“I had a lot of my family come up for the game. After it was done, I saw them for a while and then went back to the locker room to hang around with the guys. And soak up the experience. It was unbelievable.”

For the people back in West Branch, and across Northeast Michigan who are working to improve their lives, Zettel offered some encouragement.