Bucks on roll in JPC 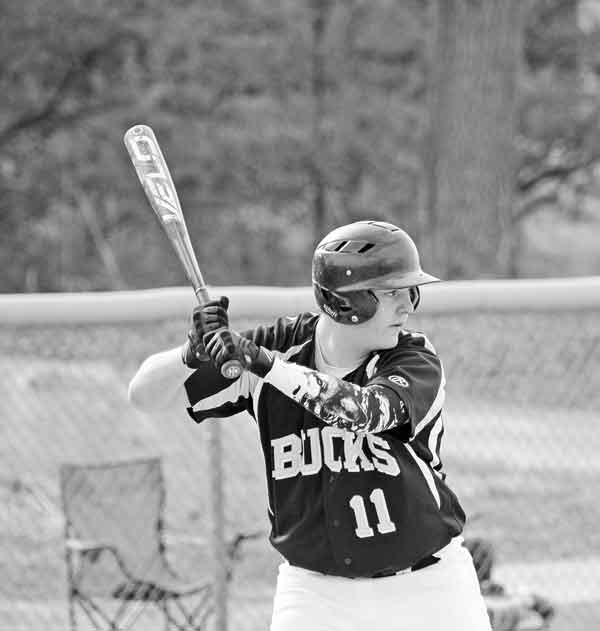 By Greg Gielczyk
ROSCOMMON — Playing until the last out is made seems to be the Roscommon baseball team’s mantra this season, and it proved beneficial in the first game of a Jack Pine Conference doubleheader against Gladwin on Thursday, May 5.

The Bucks trailed the Flying G’s, 3-2 in the bottom of the seventh inning but refused to wave the white flag of surrender and rallied for two runs to take a 4-3 victory. It started when Dane Smitz ripped a base hit down the first base line to keep the Bucks’ chances alive.

Grantz Smitz then hit a ground ball on the infield that resulted in a throwing error which put runners at second and third. Kaleb Keipert drew a walk to load the bases and Dane Smitz raced home on a passed ball to make it 3-3. Gabe Stern chased Grantz Smitz home on an infield single for the winning run.

Dane Smitz was 2-for-4, Grant Smitz went 2-for-3, Stern finished 2-for-4 with two runs batted in, Ethan Noreyko had one hit and a run batted in while Keipert finshed 1-for-3. Noreyko was the winning pitcher allowing nine hits while walking two and striking out three.
Gladwin won the nightcap, 12-5. The game was tied, 5-5 after two but the Bucks couldn’t do much more. The pitching finally showed signs of wear after a tough three-week stretch and Clio took advantage for a 6-1 win.

The Bucks split a pair of games in the Clio Wood Bat Invitational tournament on Saturday, May 7. Roscommon failed to come up with many hits in the first game.

Keipert pitched a complete game in a 3-1 victory over Williamston. Showing his experience and poise under pressure Keipert worked his way out of a few big jams, including the seventh when Williamston had the bases loaded with one out.

“We did not hit the ball well the entire day,” Roscommon coach Derek Smitz said. “However, we have a team that can keep things together due to our pitching, defense and confidence that we can win close ball games. We have entertained our fans with some nail biters.”
Stern paced the Bucks’ offense against Williamston with a 2-for-4 performance, Noreyko was 2-for-4 with a double and a run batted in and Cole Barnhart had a double and drove in a run. Dane Smitz drove in a run with a sacrifice fly. Grant Smitz and Weston Dunsmore each had single hits.