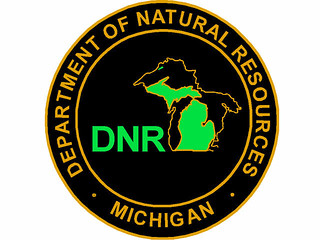 If you’re headed out fishing, please do your part to keep yourself and others safe by following COVID-19 public health and safety guidelines. Go fishing only if you’re feeling well. Practice proper social distancing (at least 6 feet away from people who don’t live in your household) and keep a face covering handy for when social distancing cannot be maintained. Frequently wash your hands with soap and warm water, or use hand sanitizer.

Reports are limited this week since this is a transition time from winter to spring. The warming temperatures means that the ice angling is winding down except in a few northern locations. Many inland lakes still have ice and are unsafe to fish – be safe and try when the water is open. Great Lake tributaries are seeing increased fishing effort as some fish species like steelhead migrate upstream to spawn. Inland waters are starting to warm in the southern portion of the state as anglers start getting out in search of panfish. Bass and muskellunge fishing is open all year because of the catch-and-immediate-release fishing seasons. However, northern pike and walleye fishing do not have catch-and-immediate-release fishing seasons so targeting them outside of the possession season is unlawful. Some inland trout lakes and many small trout streams are closed to fishing until the last Saturday in April. Don’t forget to check the online Fishing Guide for the most recent regulation information and to see if the water you plan on fishing is open during this time of year.

All anglers 17 years of age and older are required to have a fishing license.

Lake Erie: Some reports of good walleye fishing from boaters while trolling bandits.

Detroit River: Anglers fishing in marinas reported catching some yellow perch using minnows.  Boats are starting to get out with some success catching a few walleye on jigs tipped with minnows.

Lake St. Clair: Docks are in at all the boat ramps. The Clinton River Cutoff Launch will be open later this spring after dredging can be completed. Boat anglers fishing the Mile Roads and south reported mixed catches of walleye, smallmouth bass, and muskellunge. Productive reports have also come in from yellow perch anglers.

St. Clair River: The upper river has been producing good catches of walleye and salmon by shore anglers. Some boat anglers have been out as well and reported a few walleye and Coho caught. There was very little fishing activity in the southern portion of the river.

Saginaw Bay: There were a lot of anglers trolling walleye over the weekend with no success. Anglers are marking fish off Linwood in stained muddy water, but they were not biting. In Eastern Saginaw Bay, anglers are mostly targeting yellow perch near shore in boats and in the area cuts or rivers from shore. Fishing for perch has been slow for most locations. Some perch were caught in mud creek this past week, but catches varied day to day. Only a couple boats tried for walleye out of the east side of the bay with little to show for their efforts.

Saginaw River: Some perch have been caught in the lower Saginaw River on minnows, however it has been spotty. The walleye and northern pike season is closed.

Rogue River: Anglers were catching steelhead on jigs baited with spawn and waxworms.

Higgins Lake: Anglers have not been able to get out as some ice is still present. Once the ice has melted open water angling effort will increase.

Houghton Lake: Ice is still present, which is hampering angling effort. A few anglers have been fishing in the canals, but no reports have been received.

Frankfort: Windy weather has hampered angling effort on the pier and shoreline areas.

Manistee: Anglers able to get out on the piers reported catching a few steelhead and brown trout.

Manistee River: Some steelhead were being caught by anglers using spawn. Anglers using body baits and flies have also reported catching fish. The Little Manistee River is closed to fishing until April 1.

Pere Marquette River: Steelhead fishing is starting to warm up as more anglers turn to stream fishing with some limited success.

Keweenaw Bay: Ice anglers had slow catch rates the last couple of days when the ice was good to fish. Warm temperatures have hit the ice hard and recent high winds have blown a lot of the ice out. Shore anglers have managed to catch a couple Coho and the occasional brown trout and lake herring. Some boats have made their way onto the bay but floating ice chunks are still around. Rivers in the area have started to open up or are close to doing so. Few fish have been caught but anglers reported no fresh fish have moved into the rivers yet.

Cedarville: Anglers reported that there was about 12” of ice in Musky Bay. The access site to Musky Bay had a small section that was usable but conditions are changing fast. Fishing was good for yellow perch while anglers have been doing a lot of sorting. Anglers jigging minnows and waxworms reported some success harvesting 7-13” perch with many between 7-11” in Musky Bay and off Pleasant Point. Anglers fishing in the Cedarville Channel reported having success catching yellow perch.

Hessel:  The public beach access site was still usable but conditions are changing fast. Anglers reported that about 10-12” of ice was on the center and west side of Hessel Bay but around the islands and in high current areas the ice is starting to open up. Anglers were jigging minnows and wax worms with success catching smelt, lake trout, splake, and yellow perch. The perch harvested this week have been up to 12” with majority of the harvest sizes being between 7-10”. Anglers have also been catching 28-32” (8-11lbs) lake trout and 15-20” splake jigging minnows with spoons.

‘Lodge and Learn’ on Higgins Lake