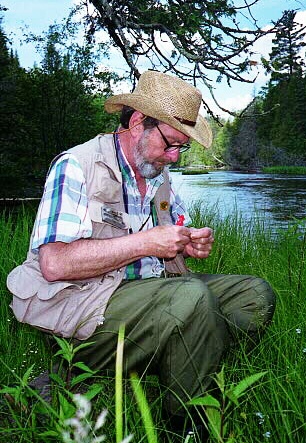 If you live in Michigan, the emotional arrival of Spring is the last Saturday in April, the official opening of Trout Season.  We in Michigan enjoy what is possibly one of the finest fisheries, especially for trout, to be found in the entire United States and the last Saturday is as much a physical date as an emotional watershed.  We have been stuck inside all winter and, unless you’re an ice fisherman, you have not wet a line for Blue Gill, Perch or Northern Pike since freeze up.

The old adage, “April Showers Bring May Flowers”, covers a lot of territory in which “Spring” arrives.  The first warm spring rains, the hints of yellow and red in the swamp willows, yellow cow slips and pussy willows.  All murmur that spring is just around the corner, (give or take a snow storm or two).

When I was a kid growing up in the thumb, my family lived very close to the headwaters of one of the better known rivers in southeastern Michigan.  Down at its mouth where it dumps into Lake St. Clair, it is brown, dirty and full of sediment year round.  But where I lived, some thirty miles upstream and within two or three miles of its cold, spring fed headwaters, it ran pure enough to drink.  This was the stretch where the Department of Natural Resources planted several thousand brook trout about two weeks before the opener every spring.

My “gang of twelve year olds” had a string of look-outs posted that let at least a dozen of us know within minutes of the arrival of the spring DNR “fish tanker”.   There were several planting points, some located where county roads crossed the stream and fed pools that were at the most, three feet deep and possibly thirty feet long with lazy rapids at both ends.  Some drop points were at the end of farmers’ lanes with the same rapids, pool, rapids configuration.  We literally laid in hiding as the fish guys poured several hundred eight to ten inch Brook Trout into each location.

When the dust settled from the fish trucks departure, it was every man for himself.  Most of us used plain old garden worms.  Some enlightened scalawags , (yes, we were that even at such a tender age), swore by whole kernel corn straight from the can.  I suspect that it didn’t take more than about fifteen minutes for us to clean out a pool of these “hatchery raised trout”.  Then it was on to the next drop point.  This was the preferred method of trout fishing among my peers until we reached an age where we realized we were old enough to be arrested and charged as adults.  That kind of put the skids to the easy pickin’s of a misspent childhood.

The next phase of my trout fishing years consisted of what I call “poke-pole fishing”.  This same stream ran through a large cedar swamp where it was reinforced by numerous natural springs that were cold and pure.  I remember one spring that burst forth under a half-rotted pine stump.  On the warmest summer days this water was barely above freezing.  You could shove a cup into an opening between the roots and a small waterfall would fill it with water so cold it would it would take your breath away.  The water had the lingering taste of sand and tannic acid with lots of dissolved iron.

At this point the stream was barely wide enough to jump across.  There was three to four feet of open water shaded by tall pines and tamaracks with spongy banks undercut by a foot or more.  It was in these undercut banks that beautiful Brook Trout lived.  Because of the small waters a close approach, no matter how carefully done, would spook the fish.  A pole long enough to allow the fisherman to stay back four or five feet was called for.  Best gear for poke-pole fishing was a seven or eight foot spinning rod with ultra light tackle.  The bait, crawlers preferred, was on a number six snelled hook with a very tiny split shot at least six inches above the hook.  This rig was carefully inserted through the brush until it was over the spot where a trout was probably holed up under the bank.  Release the bail and allow the bait to drop to the stream bottom just above the target area and wait.  If you read the water right a good Brookie would dart from the hiding spot, grab the bait and head back under the bank.  The fisherman had to set the hook, lift the fish from the water and swing it up onto the grass before the trout could return to the safety of the root filled cave it called home.  If it got under the bank it was as good as lost.  On a good day, two or three ten-inchers and possibly one fourteen inch Brookie would end up in the creel.  Because of the conditions, these trout were true trophy’s. We worked hard for them and lost far too many to the roots.  Now substitute the worm for a fly.  The rod was longer and the fly rode the surface of the water bringing the fish just a bit closer to the frying pan.  I could see the fish flash from under the bank and time the hook set with a smooth swing to the grassy bank.

I was in my late teens and was inhaling everything I could about fly fishing.  With friends having a cottage on the North Branch of the AuSable River,  just above Kellogg Bridge, I found a whole new world of peace and avocation.  I was reborn a dry fly, catch and release, fish upstream only zealot .

Crawford County is a unique location in that both the AuSable River, flowing easterly to Lake Huron and the Manistee River, flowing westerly to Lake Michigan, have their origins within a half mile of each other.  The Native Americans utilized these waterways to cross the state long before the white man arrived.  Today these two watersheds offer some of the finest fly fishing opportunities to be found in North America.  My favorite is the North Branch of the AuSable with its high banks and flower covered grassy islands.  Easily waded, the water provides lots of room for working a fly without getting hung up on the back cast.  Once the waters recede from the spring rains, the fisherman need only read what the water is saying and good catch’s of fish of all sizes are not only possible, they are probable. Find out what they are biting on by stopping at one of the fishing lodges scattered along the route.

One of the most unique fishing experiences is the Hex Hatch.  There are numerous technical names for these bugs that hatch at night and bring out Brown’s, Rainbow’s and some truly magnificent Brookie’s.  The Hex is a large fly and it catch’s large fish.  Utterly amazing for a nocturnal flying bug known otherwise a common fish fly.

A large part of the up-stream watershed is catch and release, dry fly’s only.  These waters are considered the nursery for the entire river system containing the proper temperatures, gravel bottom and habitat to support natural reproduction opportunities for all three species of trout.  You can learn the correct procedures for catching, playing and releasing a trout unharmed by talking to a local fishing guide or one of the lodge owners.  They are more that eager to protect the fishery while assuring fishermen a unique fishing experience.

The last Saturday in April heralds the start of another opportunity for the purists among us to practice a method of angling brought from the blue bloods of Europe.  It also sends an engraved invitation to the worm dunkers and bait casters of all persuasions to roll up their sleeves, dust off the tackle box and just “go fishin”.

Want more information about the Manistee or AuSable watersheds?  Stop in to the Crawford County Historical Museum.  If we can’t answer your questions, we will know who can.