How firewood became a hot topic 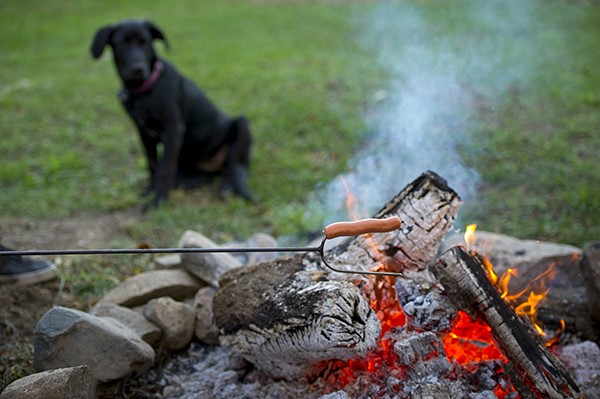 NORTHERN MICHIGAN – Years ago, most people wouldn’t give a moment’s thought to tossing an armload of firewood into the trunk before heading out on a weekend getaway. But nowadays, that bundle of wood from home might create an issue if your destination is a park or campground.

In Michigan and across the U.S., state and national parks and even private campgrounds are urging visitors to leave firewood at home and buy it locally – or better yet, buy U.S. Department of Agriculture-certified, heat-treated wood – due to concerns about invasive tree pests and diseases.

Invasive species are those that are not native to Michigan and whose introduction can cause harm to the environment, the economy or human health.

Two firewood producers from the Upper Peninsula, Mel Hittle of Michigan Fuelwood Products in Newberry and Chad Lemery of Beaver Creek Wood Products in Menominee, are under contract with the Michigan Department of Natural Resources to provide firewood for some state park campgrounds. Their experiences help shed light on how and why the firewood industry is changing.

Why did firewood become such a problem?

Some would say the emerald ash borer, an invasive insect that destroyed tens of millions of ash trees in Michigan, raised the issue of firewood as a carrier of tree pests and diseases.

Lemery points to an earlier culprit – the gypsy moth – and the federal quarantine it inspired.

According to the USDA’s Animal and Plant Health Inspection Service, invasive gypsy moths, in their caterpillar life stages, defoliate close to a million forested acres each year.

In the early 1980s, it became apparent that this species, introduced to Massachusetts in 1869, was spreading more rapidly than natural movement could account for. The moths and their fuzzy brown egg masses were hitching rides on forest products, nursery stock and even recreational equipment to establish new populations, sometimes hundreds of miles away.

To slow the spread of gypsy moths, the USDA expanded a quarantine to infested states, including Michigan, regulating the movement of items including Christmas trees, live plants and firewood.

Likewise, when the emerald ash borer was discovered in Michigan in 2002, its movement was linked to transporting firewood cut from ash trees killed by the invasive beetle. Live emerald ash borer larvae can survive and hatch from under the bark of cut ash trees, emerging to infest new locations.

Both quarantines allowed the movement of firewood if it was USDA-certified.

To meet USDA standards for certification, firewood must be heat-treated to a core temperature of 140 degrees for 60 minutes. This effectively kills organisms including insects, larvae and fungal pathogens that cause tree diseases, reducing the risk of spreading invasive species.

Certified firewood that has met USDA heat treatment and inspection standards bears a compliance stamp along with the producer’s name and address.

Opening a wood products business in Menominee, on the Michigan-Wisconsin border, in 2006 required Beaver Creek to navigate both federal and state quarantine regulations.

“It seemed likely that firewood quarantines would grow, so Beaver Creek set out to become USDA-certified right from the beginning,” Lemery said. “This would allow us to cross state boundaries and quarantine zones.”

Quarantines have not grown – in fact, though the Michigan Department of Agriculture and Rural Development’s internal emerald ash borer quarantine slowed the spread of the species to the U.P., it was rescinded in 2018, after the insect had been found in most counties in the U.P. as well as areas of neighboring Wisconsin. The USDA has proposed lifting the federal emerald ash borer quarantine to focus resources on managing the pest within the 35 infested states.

What has grown is the list of invasive insects and tree diseases that can be transported by firewood. Oak wilt and beech bark disease currently are spreading through Michigan. Asian long-horned beetle is present in Ohio, New York and Massachusetts. Spotted lanternfly is as close as Pennsylvania, and thousand cankers disease of walnut has been detected in Ohio, Indiana and Pennsylvania.

According to Heidi Frei, a DNR natural resources steward, many state parks throughout Michigan already are showing the effects of unchecked invasive species.

“For example, over the last six years, more than 1,000 trees in P.J. Hoffmaster State Park have been lost to oak wilt. The campground, which once was home to beautiful, mature red oaks, had to be almost entirely clear-cut because of infestation. That resulted in the loss of campsites surrounded by the forest canopy, important wildlife habitat and much-needed shade.”

The potential to lose more tree species to invasive species has caused an increase in firewood restrictions.

Beginning in 2014, national parks, forests and lakeshores, including Isle Royale and Sleeping Bear Dunes in Michigan, adopted policies regulating firewood to limit the spread of tree-killing pests and diseases. Policies vary by park, ranging from complete bans to permitting only locally purchased wood.

In 2018, Michigan’s state parks began requiring firewood vendors serving the parks to work toward attaining USDA certification for firewood. Vending contracts prioritized those who were certified or were, at minimum, heat-treating their firewood.

Mel Hittle started his business in 2008 with the purpose of providing kiln-dried wood because, he said, “I knew there was a market for wood that was dry.”

Like Lemery, Hittle became USDA-certified to access markets beyond the U.P. quarantine zone, including the Lower Peninsula and other states.

Today, both Hittle and Lemery exceed USDA certification standards by treating their wood at higher temperatures for a much longer amount of time than required. This is less about invasive species and more about providing wood with a very low moisture content – what Hittle calls “beef jerky.”

“People are buying kiln-dried wood because they prefer a quality product dried to a moisture content that doesn’t create as much creosote,” Lemery said. “People want a product they can easily light just by throwing a match into it.”

Hittle’s customers also are looking for high BTU (British thermal units, a measure of heat output) and a product that won’t bring bugs into the house.

Hittle staunchly supports a requirement for firewood certification, even though the emerald ash borer has already done its damage.

“The Asian long-horned beetle is not a problem here yet, but it will be if we don’t heat-treat,” he said. “Why wait until it gets here? Let’s try to keep it out!”

He admits that even though he has competition from nearby gas stations, campers still are choosing his wood, “Because it burns!”

Beaver Creek has evolved into providing high-quality firewood with a higher price point.

“The product speaks for itself, with demonstrated sales,” Lemery said. “We offer a more attractive product, so much so that people often pick up two bundles instead of one.”

USDA-certified wood may have a higher cost on the open market than green or seasoned wood, but so far it hasn’t affected the cost of a bundle of wood at state parks, according to Jason Fleming, resource protection and promotion chief in the DNR’s Parks and Recreation Division.

“No matter what state park you visit, a bundle of wood sold by the park is $5,” Fleming said.

“If certified wood is not available, aged or seasoned wood is not a good substitute,” Fleming said. “Wood that looks clean and healthy can still have tiny insect eggs or microscopic fungi spores that will start a new and deadly infestation.”

Buying firewood where you will burn it can help prevent the spread of invasive pests and diseases. A good rule of thumb is only using wood that was cut within 50 miles of where you’ll have your fire.

“It isn’t just state parks that are losing trees due to invasive tree pests,” said Sue Tangora, DNR forest health and cooperative programs section supervisor. “Moving wood between homes and recreational properties, taking wood up to the lake or home from the hunting cabin can jeopardize landscape trees and forests.”

To find local firewood vendors where you are traveling, visit FirewoodScout.org . Since costs can vary, call ahead to find the best deal.