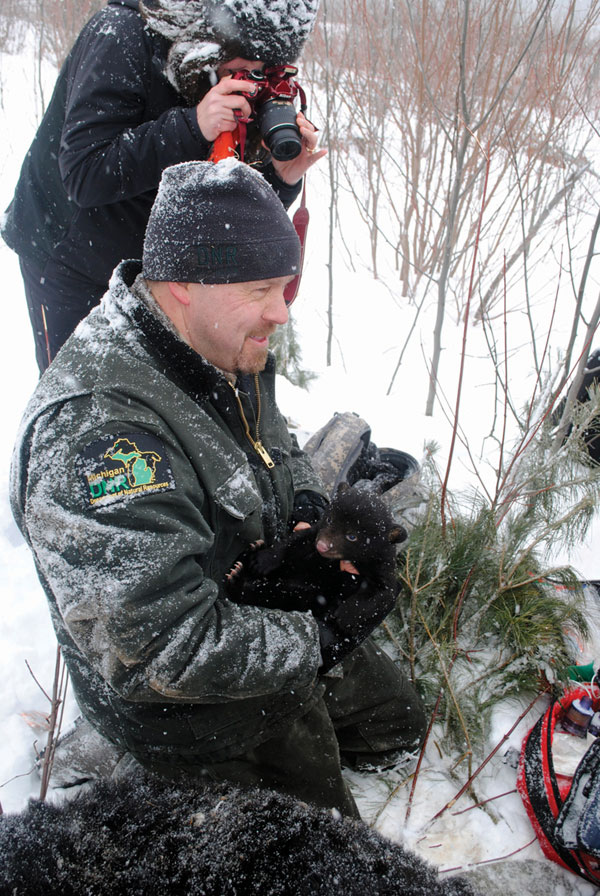 STATE – The Michigan Department of Natural Resources (DNR) has a program involved in the business of finding mothers for orphans. Not for children, for bear cubs.

Mark Boersen, a DNR wildlife biologist at Roscommon, has spent a number of days this winter fitting denned black bear sows with radio collars so he can find them again if their maternal skills are ever needed.

This is the gist of the DNR’ Surrogate Sow Program.

‘The main objective has always been to have a number of female bears we can use to raise cubs that come into the possession of the DNR,’ said Boersen, a 12-year veteran of the agency. ‘You can trick females into taking additional cubs if it’ done right.’

Boersen said the DNR places orphaned cubs with new mothers once or twice a year.

‘It at least gives them a chance they wouldn’t have and it works nearly 100 percent of the time if you can place the cub with a denned sow,’ he said.

When bear cubs become ‘wards’ of the DNR, the state’ wildlife experts have few options beyond choices that present difficulties of one kind or another.

Wildlife managers want to do what’ best for the orphaned bears and that is providing them with an adoptive mother. The program benefits bears and the DNR.

‘It takes some staff time, but not a lot of money,’ Boersen said.

This winter, Boersen began the season with only two collared bears, but he has since collared three more sows.

One bear den was reported by a landowner who said he noticed a bear with two yearlings hanging around an uprooted tree for much of the fall. When he saw the trio in the same area during deer season, he alerted the DNR. Boersen located the bears and collared the adult female.

In another instance, a sow with yearlings was located by a hunter while he was bird hunting during the late grouse season. The hunter’ dog went on point and he noticed a large hole. After the hunter leashed his dog and led it away, he checked the hole and sure enough, there was a bear in it.

Boersen and others came back to the den two months later and determined it was a mother with yearlings. A few weeks later they returned to collar the mother. The sow and the young bears were then returned to the den.

The third bear collared in recent months was reported by a landowner who found a den while wandering in the woods during the deer hunting season.

Willy Hincka, a logger who lives in Presque Isle County, discovered the den while he was headed to see a neighbor. The bear, which was not yet hibernating, had looked at Hincka a couple times.

When Hincka told his friend about it, his buddy suggested he contact the DNR. After checking that it was a sow with cubs, Boersen and his crew collared the bear March 1. Boersen checked out two other reported dens, but declined to handle those bears.

‘One was a single bear in a den and we could have easily gotten the bear, but it was late January, there were no cubs or yearlings, so I assumed that was a male,’ Boersen said. ‘I passed on that one. There’ no sense in tranquilizing an animal that you think is likely a male.’

A sow was passed on because the DNR crew could reach the den site, but the way the bear was situated inside made safety a concern.

Boersen also replaced collars on two other female bears, both of which had yearlings.

When handling a bear, the first thing Boersen does is sedate the female. If the sow has yearlings, he leaves them alone. They either remain in the den when the crew hauls out the mother, or they run off and typically return when the commotion has ended.

With newly collared bears, Boersen’ crew goes through an elaborate procedure, giving the sow a full physical. They pull a tooth for aging, apply ear tags and a lip tattoo and they record all the vital signs. Biologists then administer some antibiotics and pain medications, before they put the bear back in the den.

Cubs are weighed, their sex determined and kept warm – usually in someone’ coat – until the crew is finished with the bears’ mother.

Adoptive mothers can be used multiple times. Some of the bears have been long-lived. One of Boersen’ bears is 21 years old.

‘We’ve recorded them into their early 30s in Michigan, and Minnesota had one that went into her mid-40s,’ Boersen said. ‘I think she died of old age in her den.’