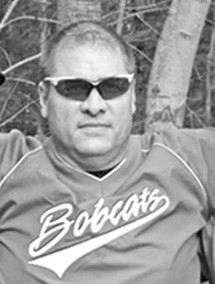 HOUGHTON LAKE – Charles Hockey won a state championship as a player for the Mesick Bulldogs in 1982. He’d like to be the one who leads the Houghton Lake Bobcats baseball team to the ultimate prize as a coach.

But he’ not making any predictions on just when that might happen, only that it’ entirely possible if the players buy into his system and are willing to work hard every day in practice and give their all in games.

A retired trooper with the Michigan State Police, the single father of one daughter (Samantha, a freshman at Houghton Lake who will run track this spring) has been coaching at one level or another for more than two decades including high school is anxious for the games to start.

Currently living in Cadillac, and recovering from a heart attack, Hockey recently moved back to Michigan from Florida where he was a golf instructor. But he’ been around baseball for close to 30 years, and it’ his true love.

‘I’ve been fortunate to learn from quite a few great coaches over that time, and played for a lot of great guys’ Hockey said. ‘You pick up stuff. The biggest thing about high school (coaching) is keeping the kids interested.

Hockey, who works for Farmer’ Insurance, suffered a stroke last August, which was followed by a heart attack and he underwent open heart surgery for a triple bypass. He goes to cardiac rehab in Cadillac three days a week, but isn’t worried about his ability to do the job.

But he admits that his doctor tried to dissuade him from going back to coaching.

‘There’ no stress in coaching,’ Hockey insists. ‘I mean, there really isn’t. If you work with the kids and they buy into the program, there is no stress. As long as they believe in themselves, all I have to do is sit back there and guide them a little bit.

‘But it’ been pretty rewarding already. They’ve exceeded my expectations in the first week. They’re a lot of good kids. The hardest part is just having them believe in themselves. The first couple times they were a little nervous, but it’ coming around.’

Hockey likes to play small ball, especially since it’ rare to find a true power hitter who can send the ball out of the park on a consistent basis in high school. He stresses the fundamentals and playing good defense.

Pitching will be an issue, so the defense will be paramount early in the season. If the pitching staff can keep the ball in the park, and the defense can pick the ball up and make the plays, the Bobcats will be in every game.

‘As long as they improve every day, that’ all you can ask for,’ Hockey said. ‘I have stations in practice, and I don’t have to get on them. They are very inquisitive and ask a lot of questions. We’ll work with the little kids as soon as its warm enough so we can get outside.

Hockey’ goal is to have the Bobcats playing on June 18 for a state championship every year.