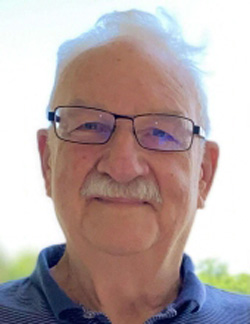 Alan graduated from Brunswick High School and joined the Air Force serving our country for 30 years and achieving the rank of Chief Master Sergeant. Alan longed to see the world and over his career was stationed in Texas, Rhode Island, Nevada, California, Illinois, Michigan, England, Vietnam and Okinawa. Throughout his career he set a superb example of excellence and always achieved the highest scores on his Performance Reports.

While stationed in Michigan, Alan met his wife Cynthia (Mazur) McGowen whom he loved deeply. Together they raised their family. They worked together as a team and provided an example of parenthood for their children to look up to.

After retiring from the Air Force, Alan didn’t sit still unless it was in his recliner at the end of a good day’s work. Soon he began his second career with the State of Michigan Department of Health and Human Services which kept him active and again serving our community for another 10 years. In his later years, Alan wasn’t ready for his recliner full-time so he took a job with the Michigan Department of Natural Resources where he enjoyed working with the fine people of Harrisville State Park. This kept him outdoors and he was able to mentor some young folks too.

Alan loved family unconditionally. He loved and supported his children and grandchildren. Alan didn’t just attend sporting events or graduations; he was the one cheering loudly. Sharing in his children’s achievements made him so pleased and proud. Hunting season with family was Alan’s most favorite time with all his children and grandchildren having learned to shoot and hunt. Coming together at camp for deer season and sharing stories of the hunt was highly anticipated. Time spent out on the water fishing and quietly talking about life took a close second.

Alan loved the simple things… hard. But mostly, Alan loved his family in such a way that each one of them knew without a doubt that they were loved. He and Cynthia taught them to end every goodbye with, “I love you.”

Flowers are certainly welcome; however, consider donating blood and platelets, planting a tree, taking your family out for dinner or a walk in the woods. Alan would love that. You may offer condolences at www.bureshfuneralhomes.com.