Have love, give love 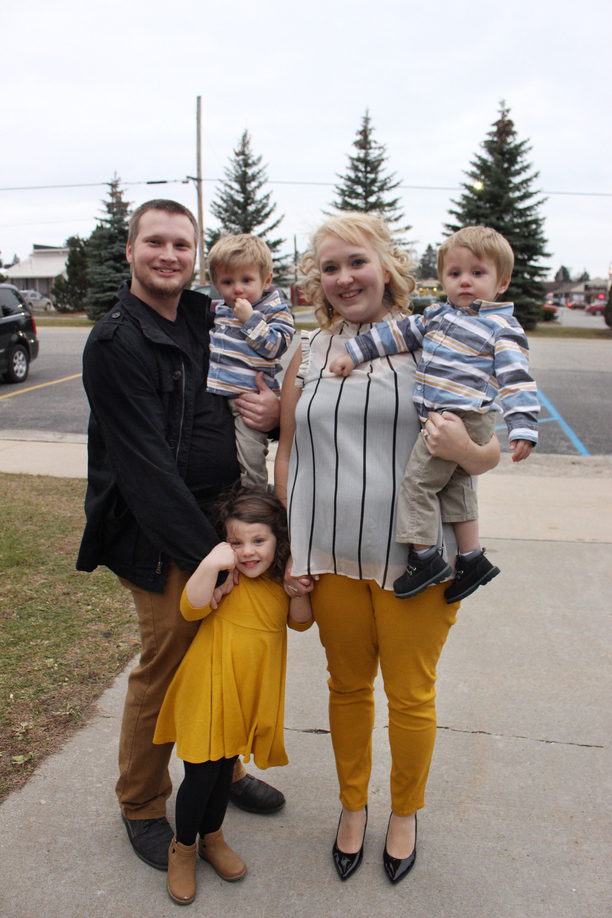 FAIRVIEW – Many families grow fast, but none as fast as that of Theo and Arisa Handrich. The young couple in their twenties went from living in a home with just the two of them, to having a daughter and twin infants almost instantly. What started out as a family of two grew into an open home and a great zeal for all children in the foster care system. Theo and Arisa are familiar faces in their hometown of Fairview. Theo can be seen most days working at the Mercantile bank in Fairview, while Arisa is a mother and an entrepreneur.

Their story begins with the idea of foster parenting, brought to the surface by Theo. While Theo had always been excited about the prospect of fostering children, Arisa had reservations. ‘I wasn’t sure I could handle saying goodbye to the children,’ Arisa said. She would have preferred to adopt, but adoption expenses were unaffordable. Despite her initial reservations, Arisa was open to the possibility of foster parenting. She spoke to a few of her friends that had fostered children before and they assured her that saying goodbye isn’t so hard because it’ in the children’ best interest.

The assurance from her friends and thefact that they were able to move into a larger house settled the debate for Theo and Arisa, and they started working with the Department of Health and Human Services to become a foster family. Soon after beginning the process, Theo and Arisa heard from two different people about the same set of children’three siblings’who were in need of a foster home. From the description of the children, Theo and Arisa had a pretty good idea that they wanted to foster them. At the appointed time, Arisa went to meet them at their grandmother’ house where they had been staying. The oldest child, Arabella, who is currently five years old, was not shy in the least when she met Arisa for the first time. ‘She came to the door and didn’t stop talking to me as soon as I got there,’ Arisa says. ‘Bella is very outgoing, funny, and so kind.’

The other children are twin brothers, Ian and Isaac, who are currently two years old. Arisa describes Ian as a ‘bulldozer’ who is funny and rowdy as well as serious at times. Isaac, on the other hand, is a ‘lover who is already an engineer.”At the first meeting I was already in love with them, and I already knew they were meant to be ours,’ Arisa said. Due to unforeseen circumstances, the process of moving the children into Theo and Arisa’ home took longer than normal. Eventually the three children found their way to the Handriches’ home, and they are there to stay.

The children were put up for adoption while they were in the foster system, and Theo and Arisa adopted them without hesitation. ‘We kind of knew that they would be put up for adoption,’ Arisa said. ‘We could tell the kids were meant to be ours.’Theo and Arisa are currently in the process of buying a new, larger house in the hopes of fostering more children in the future. While Arisa acknowledges that fostering children isn’t feasible for every couple, she says it was the perfect plan for them. ‘There’ a calling for people to love kids that aren’t theirs,’ Arisa said. She believes that everyone shares a responsibility to help children in the foster care system, a conviction rooted in her Christian faith.

Arisa references the Biblical passage from James 1:27 when she says that it is God’ instruction to help the orphans and widows in the world, ‘whether that means providing foster children with a home, or just supporting foster families.’Arisa is doing her part in helping foster families by starting a business called Buy 1, Give 1, where she sells baby blankets, and for each one sold, gifts another one to a foster child. Follow her on Facebook at TheHandrichTribe.

According to Arisa, one of the best parts about being so involved in the foster program is the joy that it places in her heart. When she sees her children going on adventures, it makes her happy to think that she has had an opportunity that has made her able to give them a different life than they have or could have had. Families interested in finding out more about becoming a foster family can contact their county Department of Health and Human Services.