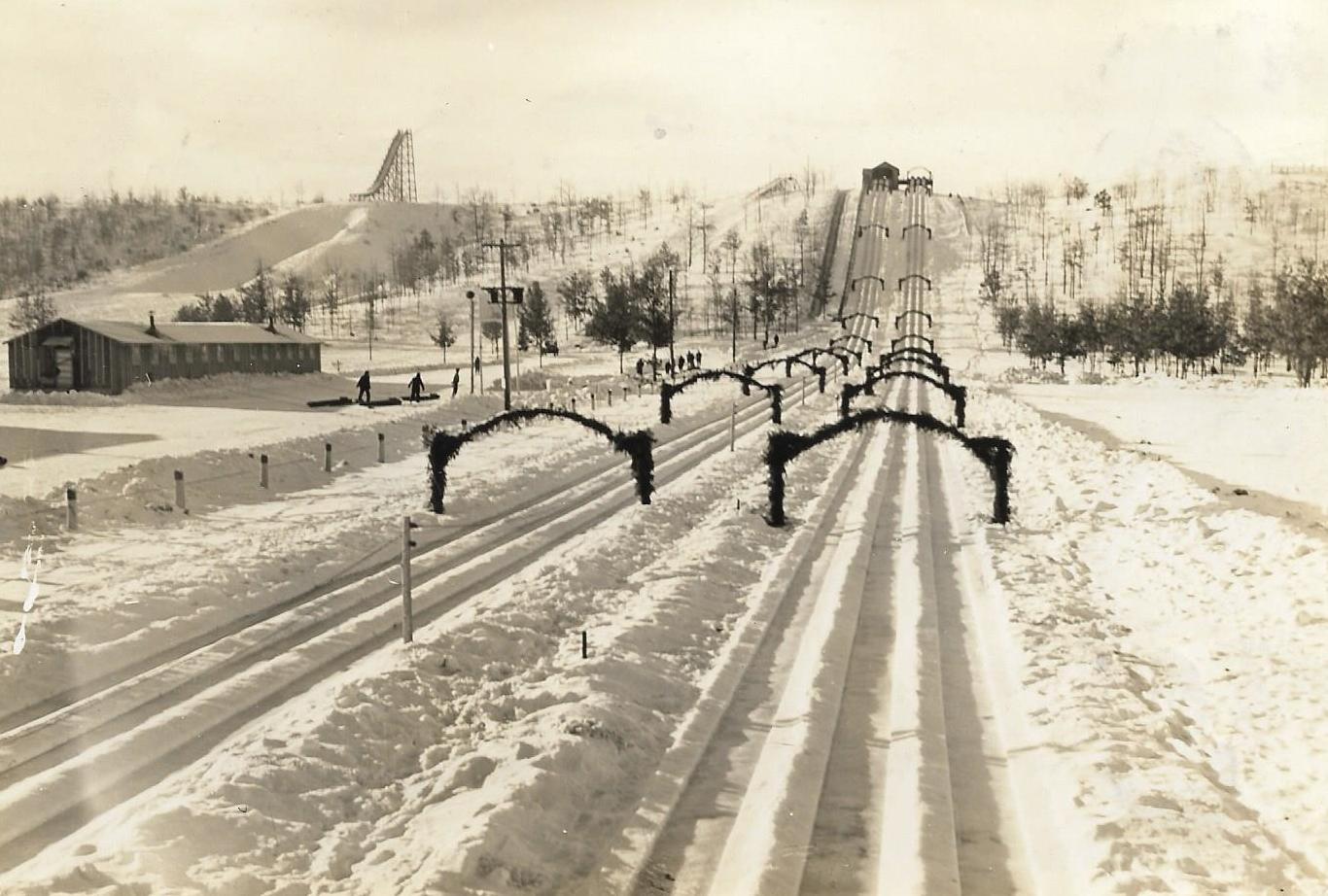 GRAYLING – In the winter of 1923, several of Grayling’s more adventurous residents paid $11.50 for a toboggan they purchased from Sorenson and Son’s because they thought it would be fun to fly over the snow. They headed for Collen’s Hill overlooking Lake Margrethe. Their first run was so exhilarating they decided on another. After dodging trees, flying off snow drifts and negotiating dips and turn, they were finally stopped by a sturdy tree that turned their toboggan into a pile of splinters. Little did these six individuals realize what they set in motion that day. Mr. and Mrs. Harold McNeven, Miss Fern Armstrong, Clarence Johnson and Mrs. and Mr. Frank Tetu, set Grayling on the path to becoming a winter sports Mecca in Northern Michigan.

During the early days of the 1900s, harvesting of the first growth pine was nearly complete. All the little towns that were spawned by the lumbering industry had to find new reasons to continue their existence. Many of the former lumber communities realized that they could capitalize on the rugged hills and waterways which surrounded them to attract tourists that would enjoy the deep snows and invigorating temperatures while engaging in winter sports activities. Grayling was one of these enlightened communities. When word spread about how much fun these six pioneering youngsters had hurtling down the slopes on a toboggan it didn’t take long for others to follow along.

The first runs were developed at Collins Hill and Landing. Clarence Johnson cleared trees and smoothed out bumps to provide a clear run all the way out onto the ice on Lake Margrethe. It wasn’t long before other folks discovered the thrill of hurtling down the hill at a mile a minute. Soon there were two runs. One was the slow run but the second run had water poured on the snow to create an icy path all the way onto the lake and toboggans exceeded one hundred miles per hour.

By 1924 there were a total of five toboggans owned by Grayling folks. Volunteers continued to smooth and widen the runs but one hazard they couldn’t eliminate was the tendency of the lake level to fluctuate up to twelve feet over the course of the winter resulting in quite a take-off at the shoreline.

In 1925 the Collins Hill slides were moved onto the National Guard facilities and to the top of Division Hill where they operated until 1927. The Division Hill slides were built and operated by Mr. Harry Thomas and Herb Gothro. Mr. Thomas was a Canadian who had a lot of experience in winter sports which he acquired at Lake Placid, New York. Two slides were built with six foot high elevated take-offs. The extra push at the top gave a run of up to 1,100 feet onto the Lake Margrethe ice. No water pumping system was available so crews had to haul water in buckets from the lake to the top of the hill in order to ice the runs. This was usually done at night in 18 to 24 inches of snow and temperatures of 30 to 40 degrees below zero.

In 1928 the slides were moved back to the original site on Collins landing and, recognizing a good thing when they saw it, the Grayling Board of Trade took over the operation of the developing winter sports industry in Grayling. Three men were hired to build new runs. A new water system was laid on top of the ground using pipe taken from an old pin mill and the first elevated starting ramp was built from material salvaged from an old sawmill. In 1929 a charge of 25 cents was levied to use the runs. Most of the non-residents that used the runs came from Saginaw and Bay City.

February of 1929 saw the official dedication of the Toboggan Slides and the Collens Hill Facility. Seventeen year-old Miss Dorothy May was elected as the first Snow Queen. Chairman of the Grayling Winter Sports Committee, T. W. Hanson crowned Queen Dorothy and then watched as the Queen and her eight Maids of Honor climbed onto a toboggan and made the first “official” run down the slope at over sixty miles-per-hour.

Early in the history of the park the construction of snow and ice thrones became a tradition and part of every Winter Sports Carnival included a competition to see who could build the largest and most elaborate display. The first throne was built by John Deckrow on the ice of Lake Margrethe. It was reported that it consisted of 1,540 ice cakes, each measuring 18 inches square, for a total of 87 tons. The “ice throne” tradition carried over to the new park on Old Lake Road and became a popular part of the Winter Carnival activities.

One of the Ice Thrones at Winter Carnival

By the time 1930 arrived it became obvious that the space required for the toboggan slide operation was running out. Clarence Johnson and Harold McNevan contacted Col. LeRoy Pearson, of the Michigan National Guard with a proposal that moved the Winter Park from Collins Hill to its present location on Old Lake Road.

In 1930 the first ice rink was built. Electricity was brought in but there was never enough money to keep up with the growth of the park. The Grayling Board of Trade and their many volunteers sponsored shows, dances, card parties and drawings to help develop the park. According to the documents in our Museum, the crew managed to “scrounge” about anything that wasn’t nailed down to build the slides and the buildings.

In 1931 the Winter Sports Association was formed with Clarence Johnson as President, Harold (Spike) McNeven as Vice-president and Roy Milnes as Secretary and Treasurer. Their first act was to put out a call for volunteers. Young and old arrived to clear the land for the Winter Sports Park. In 1931 six slides were built. A new lift for the toboggans was installed, (no more lugging the boards back up the hill). A shelter called the “dog house” was built on top of the hill by the Michigan Conservation Department with materials from Hanson Hills.

By 1933 the idea of a sports park had really caught on. Three new slides were built and a charge of 5 cents per ride was initiated. This worked well and allowed the organization to pay off a lot of debt. 1934 saw an influx of donations from the community that really provided a shot in the arm for the Park. Time, money and equipment flowed in. The Winter Sports Park was up and running.

The sixty six foot high ski jump was built in 1934. A hockey rink was built and fencing was installed. Lots of snow and low temperatures in 1935 saw the initiation of the “Snow Train”.

The “Snow Train” transported thousands of visitors to Grayling for the tobogganing, cross-country and downhill skiing, ice skating and the invigorating winter environment. The celebrated “Snow Train” ran through 1941 and, at its peak, as many as fourteen trains per season pulled into Grayling bringing up to 10,000 down-staters for a day of skiing. It was a six hour trip up and a six hour trip back with four hours at the park for tobogganing, skiing or skating. Transportation from the depot to the Winter Sports Park was provided by privately owned flat bed and stake trucks volunteered by local business and included some from the National Guard base.

The snow train arrives – the smiles tell it all! Truck transport to the park

Then came the war years. From 1943 through 1945 there were no Winter Sports Queens and no Winter Carnivals. After the War, the Winter Carnivals resumed. The “Park” continued to grow and more Snow Queens were coroneted until 1991 and Angela Michelle Harland assumed the throne as the last “Snow Queen”.

During those years the park grew to offer rooms in the unique Polyhedron Hotel built on the property. “Little Smokey,” the parks railroad, was completed and put into operation. The Fred Bear Museum was established along with horseback riding stables and the ‘Parks’ own ice cream parlor.

Despite setbacks over the years “Hanson Hills Recreation Area” continues to exist under the management of the Grayling Parks and Recreation Authority. When asked what carved the personality and character of the current Park operation, Bill Bonkowski, the Director of the Snow Sports School surmised that it was the motor car and better highways that created the complex as it exists today. A six hour train ride has become a three hour car ride from Detroit. While the toboggan runs and the ski jumps are things of the past, Hanson Hills remains an often overlooked recreation destination that offers not only winter sports but has become a full four season’s family fun destination.

We have visited, in this story, the inception and growth of a part of the heart and soul of a Michigan town that should have disappeared when the last White Pine came crashing to the ground. Instead we see a community that took the pieces of a splintered toboggan and built a tradition that still is one of the keystones of that community nearly one hundred years later. Our story just touch’s the “high points” of the early ski park.

It’s also worth checking out the Hanson Hills website at www.hansonhills.org. There is a lot of “meat” left on the bone for the curious to discover at the Crawford County Historical Museum.