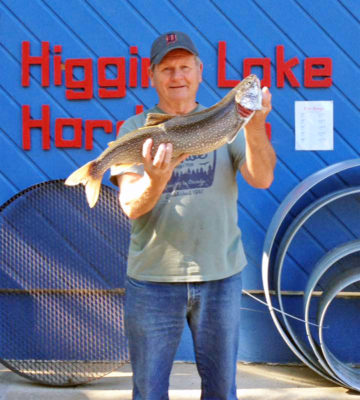 HOUGHTON LAKE—Ken Fisher of Roscommon is on Higgins Lake fishing three to four days a week. While it is always exciting to catch a big fish, the 8 pound, 27” Lake Trout he caught July 17, 2018 was extra special. Ken caught two fish that day, and lost two others jigging in 85’ of water. It wasn’t until he placed the second fish in his cooler that he noticed the first fish was tagged. “I sent a message to my son,” Fisher said. “He asked me what color it was. When I told him it was yellow he said ‘You caught the fish! Take it in to West Higgins Hardware!’”They both knew about the Houghton Lake Area Tourism Bureau’s Catch Us If You Can Contest, where catching a tagged fish in Houghton Lake, Higgins Lake, or Lake St. Helen will get you in a drawing for the grand prize. His catch, the 7th of this year, was verified at contest sponsor West Higgins Lake Hardware where he received a $50 gas card.

Others catching tagged fish earlier in the year include: Jerry Miller of Davison has a seasonal cottage in Houghton Lake that he’s been coming to for 38 years. Miller’s brother and family from Virginia were up for a week when they all went fishing July 6. It was then when Jerry caught the 6th tagged fish – a 32” Northern Pike. “They had never seen a fish that big!” Jerry exclaimed. “They were more excited about that then the tag. “I caught it and my brother netted it. .. I never noticed the tag until I took it out of the basket. It’s a good thing I didn’t throw it back!”Gavin Baker of Brooklyn caught the fifth tagged fish, a 16 ½” large mouth bass fishing on Houghton Lake June 16. “I’ve been fishing Houghton Lake for years, my grandparents own a cabin here,” Baker said. After catching the bass, Baker saw the tag and thought it was a piece of trash. “I read what it (the tag) said and got excited!” Baker exclaimed.

The fourth tagged fish, an eight-inch blue gill, was caught by Mike Mead of Holt who was fishing on Lake St. Helen with his family June 7, 2018. “(We) were fishing second lake in St. Helen. We were catching bluegill, did pretty good. Caught about 20 of them, one was tagged,” Mead said. Joshua Messerschmidt of Anchorage, Alaska was fishing Houghton Lake June 2, when he caught the third tagged fish, a 19 ¼” small mouth Bass. They all had their catches verified at contest sponsor Lyman’s on the Lake where they each received a $50 gas card. In addition, they are all contestants in the April 2019 grand prize drawing at Spicer’s Boat City. The grand prize for adult anglers is $100,000 and Lund boat from Spicer’s. There is a guaranteed major prize of $1000 cash.

The second place prize is a Mark Martin Ice Fishing School valued at $500. Youth anglers (17 and under) catching a tagged fish are eligible to win a $250 cash prize and a new kayak from Simple Adventures. More than 100 tagged fish are swimming in Houghton Lake, Higgins Lake, and Lake St. Helen. Anglers can bring their tagged fish in for verification at Lyman’s and H&H Fireworks in Houghton Lake, as well as Korbinski’s Marine in Prudenville; West Shore True Value Hardware at Higgins Lake; and Trail’s End Motel in St. Helen. The contest is year-around, ending on March 15 each year, and beginning again March 16.