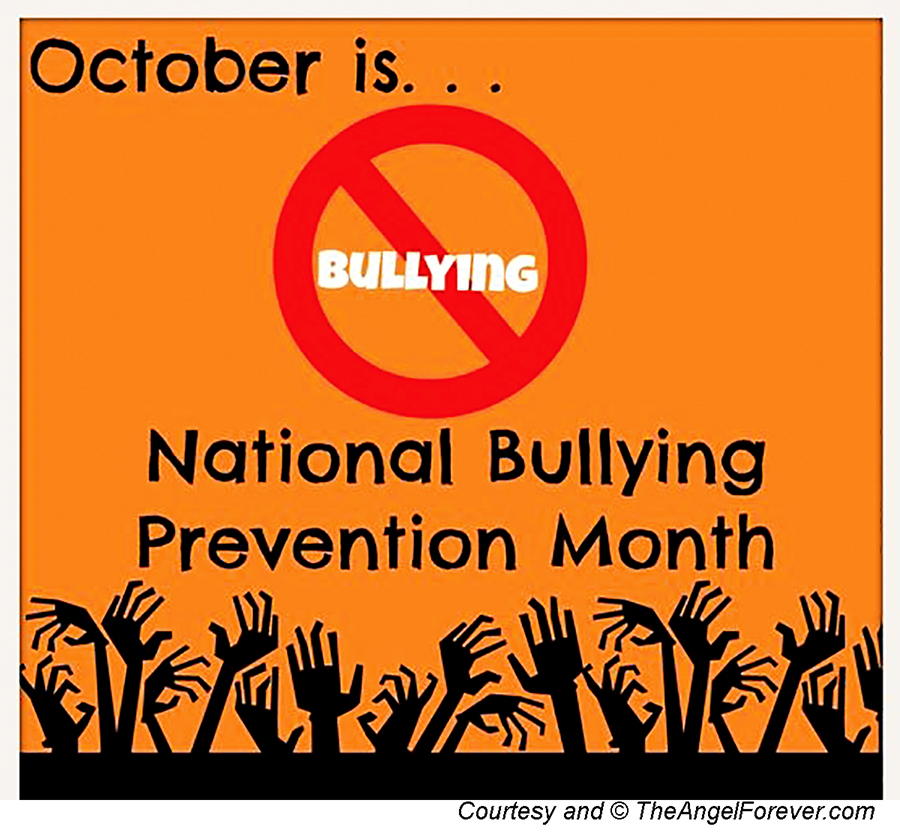 REGION – October is National Bullying Prevention Month. It is a time to realize the different types of bullying, and what can be done.

The problem of bullying is nothing new in our society. It has been going on for generations. While types of bullying may change over the years, the effects on the survivor can be serious.

‘Survivors are wounded people,’ said counselor Larry Porta of Grayling, who has helped many bullying survivors.

Porta notes that children tend to pick on others who are different in some way, often loners, those lacking social skills, a child who doesn’t fit in for some reason.

Another counselor, Kristin Lubs-Eagle of Gaylord, remembers being bullied in fourth grade herself because she was tall for her age. A boy in her class began calling her ‘Mama Moose.’

She already felt awkward about being taller than other kids. His words amplified those feelings.

Her experience finally reached its pinnacle when the boy took her yearbook photo, altered it to make her look like a cow and passed it around to other students. The experience was humiliating.

Life became easier when Eagle attended middle school and she had a larger well of people to draw friends from. Yet, even then, some of the effects from that fourth-grade year persisted.

‘Other people often referred to me as being the shy one in the family,’ Eagle said. ‘Really, it was anxiety which held me back. Life was different after I dealt with that.’

Today, many people are confused about what bullying is. Some think it is just teasing. Others believe it is just someone trying to start a fight.

In truth, there are four types of bullying in today’s society: verbal, physical, social and cyberbullying.

Verbal bullying includes teasing, name calling, inappropriate sexual comments, taunting or threatening. While these may not seem very harmful to some, the harm is in the repetition. A child who is continually told something will begin to believe it is true, according to the counselors. The victim will begin to identify themselves with words like ‘sissy’ or ‘slut’ if told often enough.

‘It is always easier to believe a lie,’ said Porta. ‘Only about 20 percent of what we believe about ourselves is accurate.’

Physical bullying includes hitting, kicking, pushing, tripping, taking or breaking someone’s possessions and rude hand gestures. While this activity is more prevalent among boys, it can happen among girls.

Social bullying includes leaving someone out of an activity on purpose, spreading lies or rumors about them, or embarrassing someone in public.

Cyberbullying has come about with the invention of the Internet and social media. It occurs when a bully attacks someone online, generally through words or pictures.

‘I’ve been seeing an increase in cyberbullying lately,’ said Porta.

Porta notes he has dealt with a number of cases involving pornography and shaming the person. He said typically a boy will talk a girl into exchanging revealing photographs of each other online or by phone. Then, one or more of those images get into the hands of other classmates and are reposted. Soon, most of the children at school have seen them. Usually, the girl becomes labeled and is then bullied by classmates.

‘People need to know, we are not defined by our behavior,’ Porta said. ‘Your behavior isn’t who you are. I believe God defines you. Your strengths and talents are who you are.’

In treating those who have been bullied or abused, Porta addresses the shame they feel, but spends a lot of time exploring their strengths and talents with them.

‘We can develop these false thoughts and need to see outside of this,’ notes Eagle. ‘Counseling can help.’

The amount of counseling needed depends on the individual and where what phase they are at. Eagle said survivors who are at the anger phase will require less counseling than those who have already gone into the depression phase.

Both Eagle and Porta agreed bullying needs to be reported immediately. Survivors of bullying need a parent or adult who will stand by them throughout the experience and a counselor who will help them through it. Bullying events should be documented on paper, so there is a record.

According to Joni Metiva, a Grayling Middle School counselor, students should report any bullying to the office. A form will be filled out and the situation will be investigated. Metiva also accepts emails on such incidents.

One of the challenges administrators face today are false reports of bullying, Metiva said.

Administrators also have to make sure the incident is not isolated. By definition, bullying is a reoccurring situation.

‘Sometimes, at this age level, kids will act or say something without really thinking about what they are doing. Sometimes as humans, we make mistakes.’

As an example, Metiva notes there is a difference between bumping into someone once in the hallway and repeatedly doing it.

Metiva said her office is always open. Any student who has been bullied or fears being bullied because of past experiences is welcome to come in and talk.

Our focus is on the positive people and events that make Northern Michigan a great place to live, vacation, work and play.
We have been commercial printers and publishers since 2010, specializing in brochures, rack cards, magazines and other newspapers and publications. A new addition to our stable of marketing products are various promotional items such as shirts, hats, mugs, water bottles and much more.