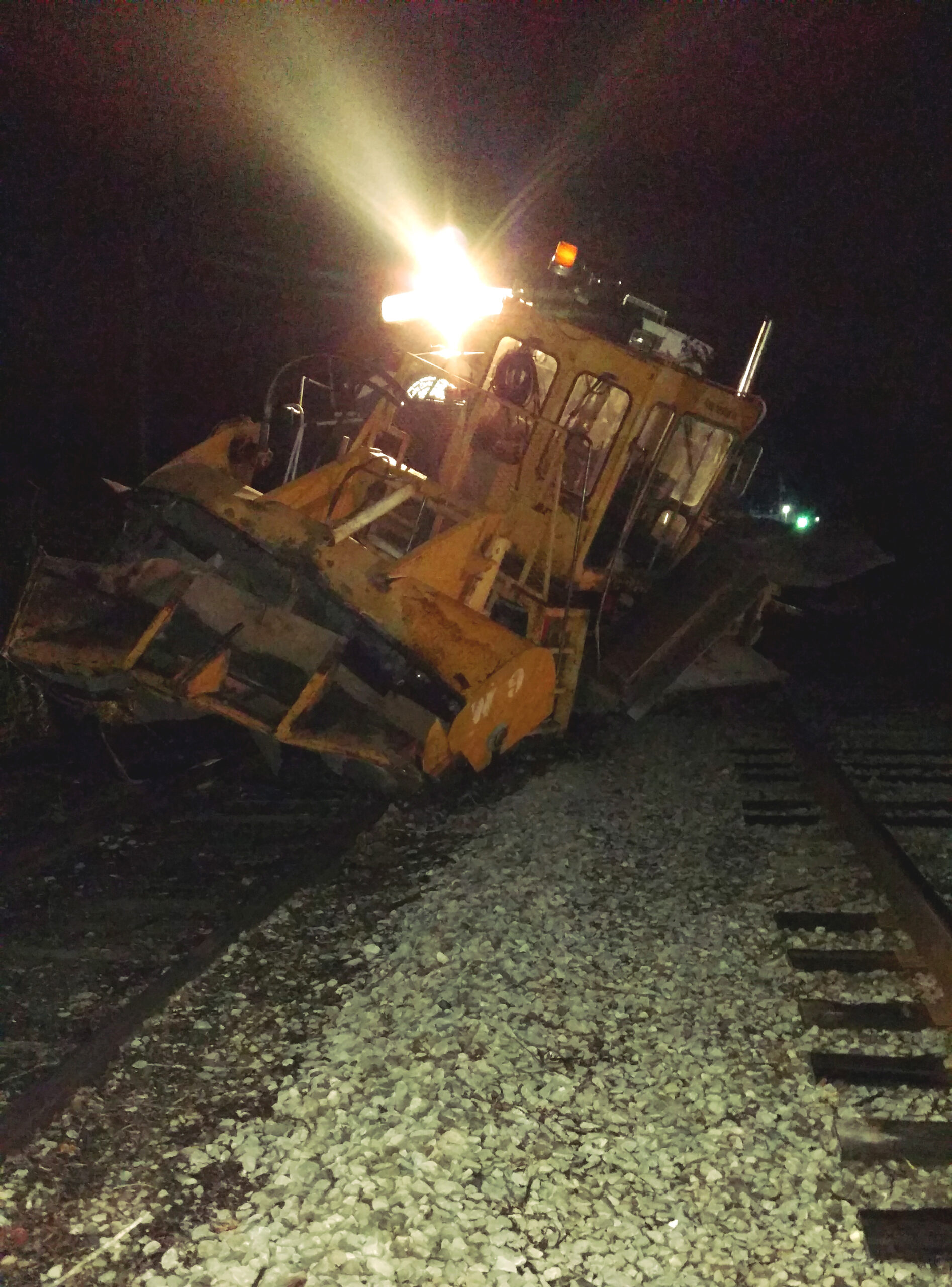 ROSCOMMON – A Lake State Railway engine pulling about a dozen

cars exited the main railway into a repair area Monday about 10 p.m., striking a piece of maintenance equipment and twisting up the main tracks in downtown Roscommon.

Desiree French of the Federal Railway Administration, a division of the U.S. Department of Transportation, is processing a request for specific information about the incident.

According to witnesses, they heard a loud noise and then the train stopped. Which is unusual because the train rarely stops in Roscommon.

The engineer told witnesses the side track (siding) was left open to switch into the Maintenance of Way (MOW), where the equipment was located. The engineer also indicated no one was injured in the accident.

The MOW “siding” is a space set aside on the track for repairs.

The are two types of parallel MOW repair tracks: A “stub” and “siding.” A stub track has only one switch to get equipment in and out of the repair area. A siding has has switches at each end so it can be entered from either direction. The switches are operated by keys controlled by the engineers and repair crews. Officials indicate that it’s highly unlikely the switch could have occurred as a result of vandalism.

The “siding” in Roscommon is not long enough to hold an entire train, so officials indicated the siding is probably used as a MOW exclusively.

A visual inspection of the scene found the train hit an unidentified piece of railroad maintenance equipment, which

then flipped onto its side and dug a trough in the gravel between the main track and the ‘siding,’ tearing up the railroad ties on the primary line.

The force was strong enough to bend the track on the primary line in multiple places. The piece of maintenance equipment was seriously damaged, but it was hard to determine damage at the time of the accident because it was dark.

As a result, the main track is currently blocked at the North, although it appears that once the repair equipment is detached from the engine, it could potentially back up the train to the South. Plus the engine and cars, along with the damaged repair equipment will probably be in Roscommon for several days.

That specific determination will be made by the Federal Railroad Administration, a division of the Federal Transportation System.

According to fra.dot.gov, the ‘Security, Preparedness and Accident Analysis Division continuously monitors the occurrence of train accidents and incidents. FRA field personnel are routinely dispatched to the scene of serious train accidents in order to determine their cause, or whether a formal investigation is warranted.’

Most accidents are investigated if they fall into one of three categories: