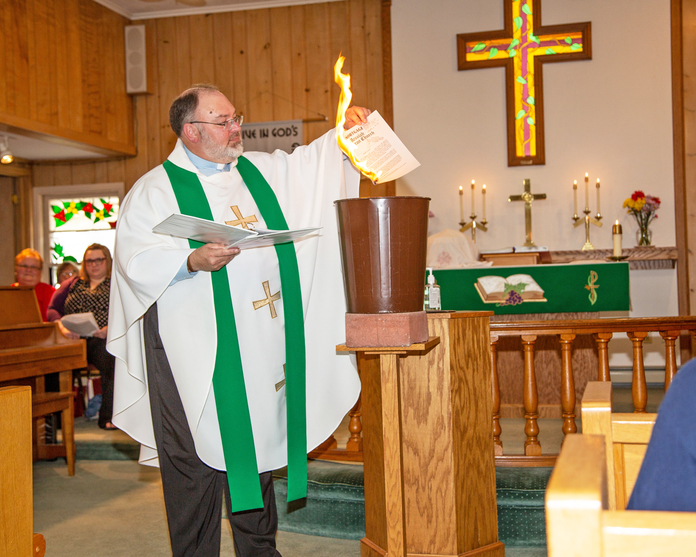 ROSCOMMON – On July 22, 2018 Messiah Lutheran Church of Roscommon has passed yet another milestone. We have been blessed to pay off our mortgage and the celebration is in commemoration of the generosity of our members, guests and bequests of members passed. The Messiah Lutheran Church Building was originally a one-room country school house known locally as the Wayne School.

Early Scandinavian immigrants began holding worship services and Sunday School in this building about 1910. In 1930, upon the consolidation of the Gerrish and Higgins Townships School Districts with the Village of Roscommon, the Wayne School was vacated for school purposes. All of the school furniture and equipment was removed except an old wood and coal burning space heater. The building was made available for sale; and on August 10, 1935, the property was deeded to the Lutheran Ladies’ Aid for the sum of $329.53.

The building was remodeled into a small chapel, the storage room attached to the main building. The men of the congregation built wooden benches which were installed for pews. The altar was hand crafted and finished by Elof Soderholm. The communion rail was a gift from Bethlehem Lutheran Church of Traverse City. Labor for the entire remodeling project was provided by men of the congregation.

On October 28, 1935, eighteen adults and twelve children gathered in the newly remodeled chapel for the purpose of organizing the Messiah Evangelical Lutheran Church of Roscommon, Michigan. On December 29, 2008 a mortgage was taken out to build an addition to our small church. This addition would allow for a complete kitchen facility, a fellowship hall for gathering, Mens’ and Women’ bathrooms. Also added was a room addition to house a much needed day care facility for the Roscommon area. Today, we were honored to have with us as our guest, Pastor Chrysanne Timm from the North/West Lower Michigan Synod Bishop’ office to officiate our service and Pastor Lonnie Wilkerson to perform the mortgage burning ceremonies.

Following the ceremonies, a pot luck luncheon was enjoyed by all those attending the celebratory service. Messiah continues with ELCA’ motto of ‘God’ Work. Our Hands’in its service to the Roscommon community and looks forward to continuing it outreach to all in need.

Passed Away On Friday February 26, 2021 At Home With His Loving Family By His Side. Robert was born on July 22, 1932 in Lansing,...
Read more
Roscommon Features

HOUGHTON LAKE - Roscommon County Relay for Life was held June 23 in the rain. Regardless of the weather, community members still came out...
Read more
- Advertisment -