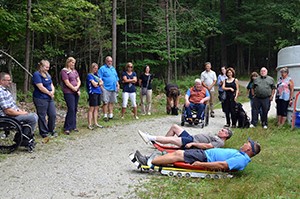 That’s all it took. Flat on my back, head raised slightly, core muscles straining as I rode a sled 20 miles an hour down the summer luge track at the Muskegon Winter Sports Complex inside Muskegon State Park in West Michigan.

Nine seconds to travel 300 feet is fun for just about anyone. Speaking for myself, as someone with a disability, it was more than fun – it was a thrilling personal first.

The truth is that people with physical disabilities don’t often have opportunities to experience speed independently. People who use wheelchairs encounter a lack of both adaptive equipment and barrier-free environments.

People who are blind, as I am, face challenges that are not physical, but obstacles of people’s misconceptions.

I was there as a member of the DNR Accessibility Team, an internal team that serves as a liaison between the department and the council. The council had gathered at Muskegon State Park to hear from park supervisor Greg Sherburn and Jim Rudicil, executive director of the winter sports complex, about existing accessibility features and future improvement plans.

Now in its 10th year, the summer luge is the world’s first universally accessible wheel luge track. It includes three different ways for people to transfer from a wheelchair or other mobility device to a sled at the top of the track.

“We want to meet the needs of all customers,” Rudicil said. “It’s an important part of our mission. We embrace the philosophy of universal accessibility and work to solve obstacles.”

This fall brings construction projects at the winter sports complex and the park that will enhance visitor experiences for everyone in 2020.

Work on a dual zipline breaks ground in October. Rudicil said that his team’s commitment to universal accessibility led to a final design that added 300 feet to the original 1,000-foot length.

“Now, when it debuts next year, the zipline will be an even more exciting, accessible experience for everyone,” he said.

The winter luge also will be lengthened to improve accessibility. Rudicil feels that luge is a sport where people with disabilities can compete alongside athletes without disabilities.

“Luge requires upper body strength, position and memory,” he said. “These are attributes that, for example, might already exist in someone who uses a wheelchair or someone with a sight impairment.”

Things are not standing still in the park outside of the sports complex.

The channel campground – the larger and more popular of Muskegon State Park’s two campgrounds – has closed early for the demolition of two restroom buildings.

“The channel campground has accessible campsites but, at 70 years old, the toilet buildings were not accessible,” Sherburn said. “With the opening of two modern facilities next spring, we’ll be able to fully meet the needs of all channel campers.”

A “Brock Dock” – a hard, level path on the beach – gets people of varying mobility levels close to the water’s edge. Like many features created to improve accessibility, it also is used by the general public.

“People who don’t want to burn their feet in the sand appreciate the ‘Brock Dock’ too,” Sherburn said.

The dock is not the only way for people with mobility challenges to get to the lake.

Muskegon State Park has received one of five track chairs donated to the DNR by Kali’s Cure for Paralysis Foundation. These battery-powered chairs can go off road, handling trails, sand, snow and up to 8 inches of water.

The other track chairs donated by Kali’s Cure are available to use free of charge at Belle Isle Park, Mayberry State Park, Tahquamenon Falls State Park and the Waterloo Recreation Area.

With more than $6 million spent on accessibility and infrastructure there, Eichinger said that the park exemplified DNR visitor-focused investment.

“Grand Haven,” he said at the ceremony, “is a testament to the future of Michigan state parks.”

Well, as they say, the future is now.

Cindy Burkhour of Access Recreation Group is a longtime member of the Accessibility Advisory Council. Among the myriad projects she has been involved with over the years, she helped design the transfers for visitors with disabilities at the summer luge and at Ocqueoc Falls, the nation’s first accessible waterfall.

“I have seen a cultural, attitudinal shift,” she said. “More and more people see how accessible features like raised firepits, adaptive picnic tables and accessible toilet/shower facilities benefit everyone, not just people with disabilities.”

“Michigan is far ahead of other state parks systems,” she said.

Wilderness State Park at the northern tip of the Lower Peninsula, has been seeing an increase in visitors of varying mobility levels in the campgrounds and the day-use area, park supervisor Burr Mitchell said.

At the same time, he was confronting aging infrastructure at the park and was approached by Eagle Scouts looking for a project.

With funds from sources including the Michigan Natural Resources Trust Fund, Disabilities Network of Northern Michigan and park visitors, Wilderness State Park debuted a host of accessibility enhancements this summer.

The park now boasts a barrier-free campground registration building and toilet/shower building in the Lakeshore Campground and a wide range of barrier-free rustic, modern and full-hook-up campsites developed to provide a wider range of camper amenities.

“Having a disability doesn’t change what you want your camping experience to be from what anyone else wants,” Mitchell said.

That includes the desire to splash around and have fun in Lake Michigan. This summer, the park added Mobi mats that offer a portable, steady surface across sand to the water’s edge.

But another piece of adaptive equipment has made an indelible impact on park visitors and staff – the floating chair. With someone safely strapped in the seat, the chair can go into the water, as the armrests and wheels allow it to float.

“Twice this summer, we witnessed visitors able for the first time to be in the water, enjoying it together with their friends and family,” Mitchell said. “Everyone was in tears.”