DNR to work on CCC Museum 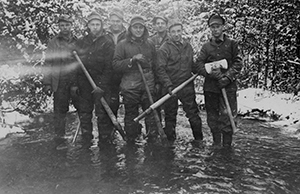 Have you ever driven down a Michigan road and noticed all those trees growing in perfectly straight lines?

Trees don’t grow that way naturally, so how did they get there?

Eighty-six years ago, a “tree army” 100,000 strong invaded Michigan, and the landscape was changed forever.

Today, nestled within North Higgins Lake State Park in Roscommon County is a museum commemorating the work of those hard-working men.

This army was run by the United States military, but the soldiers weren’t military men. They were the malnourished boys of the Great Depression and enrollees of the Civilian Conservation Corps, or the CCC.

Part of President Franklin Delano Roosevelt’s New Deal program, the CCC was a federal works program focused on conservation projects. It gave work to unemployed young men and veterans from 1933-1942.

In 1933, young men throughout Michigan clambered to CCC offices around the state. In exchange for six months of labor in one of 128 Michigan CCC camps, the men received food, clothing and, best of all, $30 a month. Of this $30, enrollees kept $5 while the rest was sent directly to their families. In a time of great economic woe, $25 was a savior for many Michigan families.

Many CCC boys were proud of the help they provided to their families.

“Once you got into camp, you wanted to get home, but after receiving a letter from your family who received $25 and told you what they had been able to purchase with that money – a coat, food, and wood for the stove – you felt for the first time that you were helping your family and nothing could induce you to leave the CCC,” recalled Michael Rataj, a former Michigan CCC enrollee.

Spearheaded by CCC alumni, the museum was built in 1985. It resembles a barracks that the alumni lived in and commemorates all the work these young men accomplished.

In addition to planting tens of thousands of trees, the CCC boys built water control structures – like those at the Seney Wildlife Refuge in Schoolcraft County – and worked to prevent forest fires, soil erosion and flooding on state and federally managed lands across Michigan.

Unlike the still-evident work of the CCC, museum exhibits aren’t meant to last much longer than 20 years. So, with great enthusiasm, staff at the Michigan History Center began a redesign of the Civilian Conservation Corps Museum in Roscommon County in 2018.

“This exhibit redesign gives museum staff the opportunity to highlight different artifacts and showcase the importance of the CCC from a 21st-century perspective,” said Suzanne Fischer, museum director at the Michigan History Center.

Highlights of the new exhibits include a never-before-displayed shovel whose tip is worn down from repetitive and backbreaking CCC work, an interactive barracks display that includes a trunk full of CCC gear that visitors can try on, and redesigned flip panels.

A favorite of museum visitors, the updated flip panels give an in-depth look at all the Michigan CCC camps, A to Z. The panels include camp photos, locations and work projects.

Using the real stories of diverse CCC enrollees, the new exhibits – which include a redesigned map of Michigan CCC camp locations – highlight the impact the CCC had on Michigan’s landscape, local communities and the 100,000 young men who enrolled in the program.

Visitors typically come to the museum specifically to find out more about a loved one who was a CCC enrollee.

“Many visitors enjoy finding the location of their dad’s or grandpa’s camp on the map and then finding more information about that camp in the flip panels, while their kids and grandkids explore the try-on trunk,” said Josh Rademacher, a summer interpreter at the museum.

The Michigan History Center invites these repeat visitors and others to come to experience the redesigned museum from 10 a.m. to 3 p.m. June 15.

This grand reopening event will showcase the new exhibits along with some special guests from the DNR and Huron-Manistee National Forests and, just in time to celebrate his 75th birthday, Smokey Bear.

State park centennial beer from New Holland Brewing Company, nonalcoholic Walker Tavern Root Beer and 1930s-style hours d’oeuvres will be served. The special guests will highlight the work they do today to continue the hard work of the CCC, such as stocking fish, fighting forest fires and planting trees.

Phase two of the museum redesign project, focusing on the back room of the building, will take place throughout the winter of 2019-2020. Currently open to the public, this room is used to show videos and for small programs. It will be transformed into a multi-use space for videos, programs, projects and research. Highlights will include information on how to begin your own CCC research, the education and vocational training efforts of the CCC, and an updated viewing area for the CCC documentary “Camp Forgotten,” by Bill Jamerson.

Although the museum was constructed in the 1980s, it is located on the site of a former CCC camp. However, the location’s significance goes back much further in Michigan history.

The site is the location of Michigan’s first tree nursery. Opened in 1903, the Higgins Lake State Nursery was one of the largest pine nurseries in the world and home to Michigan’s very first fire tower. The grounds of the nursery, which shipped up to 20 million seedlings a year at its peak in the 1920s, are extensive.

Today, the site includes several red wooden buildings used in the nursery’s heyday, including during the CCC era. Most of the grounds are covered by shrubs and trees. A timber sale, slated to be completed in the next two years, will open the nursery grounds for the first time since it closed in 1965.

“Once full of seedbeds, the cleared areas will show visitors just how massive this operation was,” Pellow said.

Harkening back to its early days as a hotbed of U.S. forestry research, the Higgins Lake Nursery will once again be home to forestry science and discovery in 2021.

In collaboration with the Michigan Department of Natural Resources, Michigan State University will begin progeny testing there, planting red pine seedlings and testing the genetics of these trees for 20 years.

In the coming years, visitors also will notice improvements along the trail system that begins in the museum and nursery parking lot. This trail, dubbed the “Cradle of Forestry” section of the Iron Belle Trail, eventually will make its way north to Hartwick Pines State Park.

Signage on the trail will show how this area, once devasted by the white-pine logging era, was home to Michigan’s first state forest and nursery and pioneers in forest fire fighting.

Find visitor information about the CCC Museum and Higgins Lake Nursery at Michigan.gov/CCCMuseum .

For more information about the sites or history of the CCC in Michigan, contact Hillary Pine at 989-348-6178 or PineH@Michigan.gov .