Snowshoes but no snow 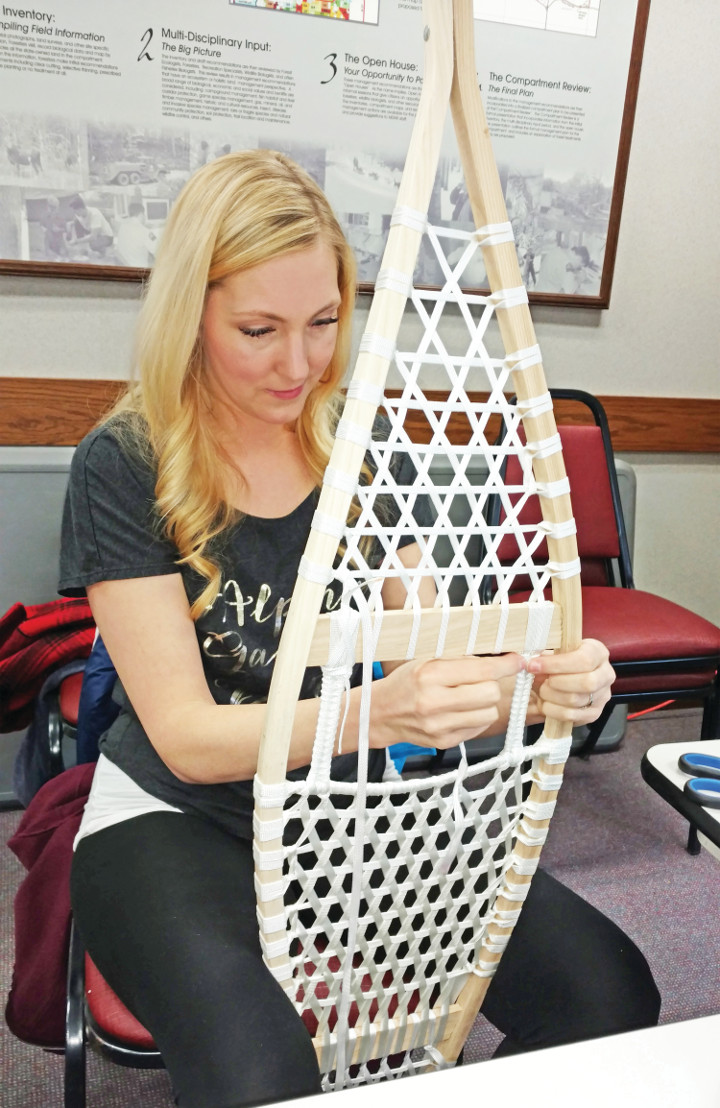 GRAYLING – ‘If you can crochet or do macrame’ this will be easier for you.’

That was one of the initial statements by Craig Kasmer of the DNR’s Hartwick Pines Visitor Center, as he began to teach his latest snowshoe building class.

Although he was flippant and humorous during the May 3-4 class, Kasmer was serious about the crochet and the dozens of knots

Students were given a snowshoe frame, and a blue bag, that when dumped onto the table, revealed almost 75 feet of nylon binding material that at times reminded students of a ‘rats nest,’ the weird knots created when the line on an old fishing reel tangles up after a bad cast.

They were given written instructions and told, ‘Go!’ And everyone started, with more than a little help from the instructors and other participants, some of whom had already been through several classes.

For the past few winters, Kasmer has hosted multiple courses at Hartwick Pines, bringing together local and downstate residents to learn the nuances, and frustration of properly building an Ojibwa snowshoe. Kasmer has been working on snowshoes for so long he doesn’t need directions and has the patterns for at least three different styles memorized. He was recently joined by Hillary Pines, another educator who normally works as an interpreter at Tawas Point and other regional DNR facilities.

Snowshoes are found in a wide variety of styles: From Bear Paw, which works best in heavily wooded areas where tight turns are required, to Alaska, which are large and wide, made to travel in deeper snow and drifts. Regardless, the purpose of a snowshoe is to spread a person’s body weight over an area large enough to prevent them from sinking too deeply into the snow.

According to Wiki, the origin and age of snowshoes are not precisely known, but historians believe they were invented from 4,000 to 6,000 years ago. Before people built snowshoes, nature provided examples through several animals, most notably the Snowshoe Hare. It evolved over the years with over-sized feet, enabling them to move more quickly through deep snow.

The “traditional” webbed snowshoe as we know it today had direct origins to North American indigenous people, e.g., the Huron, Cree, and so forth. Samuel de Champlain wrote, referencing the Huron and Algonquin First, in his travel memoirs (V.III, pg. 164), “Winter, when there is much snow, they (the Indians) make a kind of snowshoe that are two to three times larger than those in France, that they tie to their feet, and thus go on the snow, without sinking into it, otherwise they would not be able to hunt or go from one location to the other”.

And even though the snowshoe itself may be of ancient origins, making them today is a bit easier. Originally made of cedar boughs and gut, modern snowshoes can be made of wood or aluminum, with a nylon or rubberized webbing.

The patterns which make the snowshoe successful however, haven’t changed much over the years.

‘Over the vertical. Under the horizontal. Right to left. Right to left,’ Kasmer would say as he stopped by each participant, as they created the intricate weaves in the base, heel and toe of the shoe. At times, an improper cross would require the builder to stop, strip out the nylon and start over, negating a half hour of work or more.

The students in the March 3 class finished the webbing on their snowshoes in less than a day and a half. Once the weather breaks the shoes will need to be covered in 3-4 coats of varnish, which will protect them and give them the appearance of the Native American style shoe. The bindings (where your feet hook in) are installed last.

The project is not for the easily frustrated. But if you can make it through Kasmer’s good-natured ribbing, it is something that once you finish, offers a good sense of satisfaction GÇª and sore hands.

Anyone interested in being added to a registration list for next year’s snowshoe-making classes should email Kasmer at kasmerc@michigan.gov.