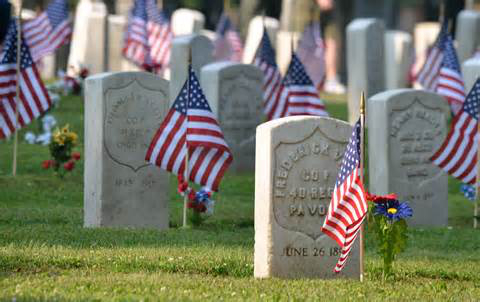 As a nation, we spent the past few weeks getting ready. We’ve invited friends and family into our homes. Traveled to our favorite places. And built on our personal patriotic traditions.

Although most of us know in the back of our minds what Memorial Day is, we all need a reminder now and then because we get caught up in the annual ‘summer kickoff’ thing.

Memorial Day is the day we set aside to acknowledge the men and women who died in defense of our nation.

The tradition of ‘Memorial Day’ as we know it, has its roots in the Civil War.

The conflict claimed 600,000 lives, more than all of our other wars combined. As a result, both the North and South sought ways to honor their dead.

In the Union States, the first formal recognition of a day set aside to honor deceased veterans was named ‘Decoration Day’ It was created in 1868 when the Grand Army of the Republic declared it a day to decorate the Graves of Union soldiers. Michigan was actually the first in the nation to recognize it as a state holiday.

The national ‘Memorial Day,’ recognizing all of the nation’ war dead, was adopted by the federal government in 1967.

As we enter the summer of the 2016 election season, you will hear things like: ‘This election will determine the future of our nation GÇª They hate America GÇª They are not fit to be president GÇª Our nation will cease to exist GÇª’

The candidates make it sound as if we’re at war with ourselves again. The ‘Democracy is messy,’ quote doesn’t begin to reflect the vile crap we endure each election cycle by hacks posing as patriots.

However, nothing was as divided or as messy as that war. Think about it: The fledgling United States of America had gained its independence from England less than a century earlier. Then decided to declare war against itself?

In the end we had to heal. And Memorial Day is a continuous part of the healing process.

The world can be a scary place. Same nations believe the United States is an outlier. A temporary blip created by an accident of history that needs to be wiped from the planet. But I can assure you GÇª it was no accident. It was and continues to be the sacrifice of everyday men and women who make our nation possible.

Although most veterans will tell you we should never go to war, the reality is that all of us who enlisted, or were drafted, know that it’ necessary sometimes. And in the future, we’ll mourn again as our brothers and sisters in arms die in foreign lands, or later at home as a result of the physical and emotional toll of the battle.

This Memorial Day, just hit pause for a second GÇª

If you can’t find a ceremony, have your own. Set up a flag at your campsite or on your front porch. Bow your head.

Because today … we honor those who didn’t.