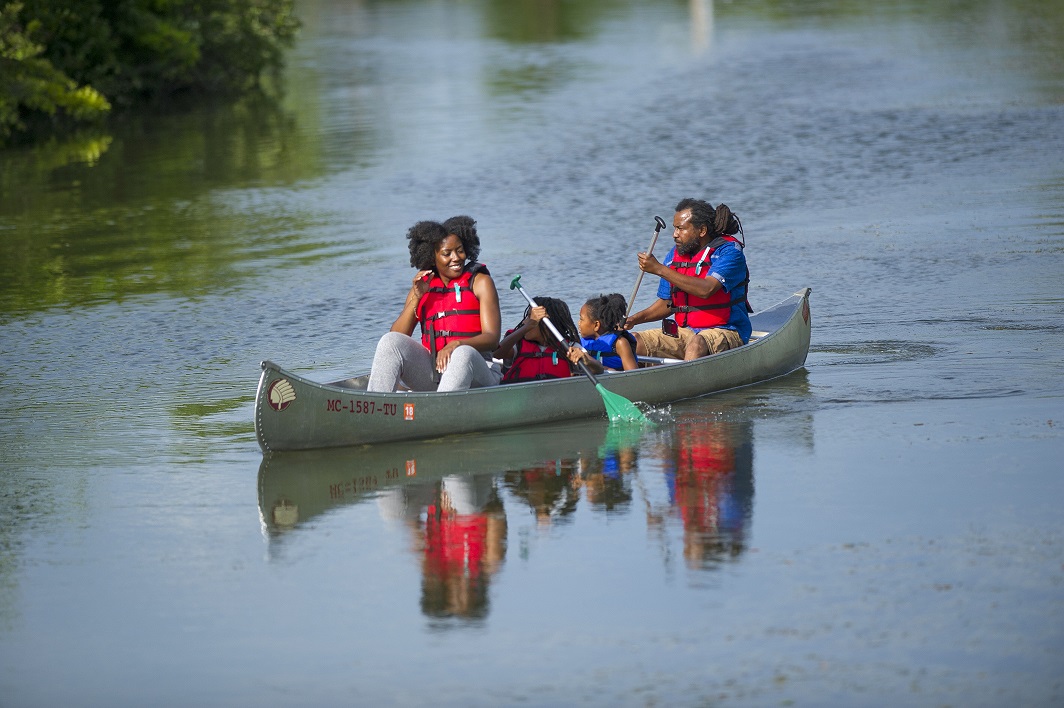 With more than 3,000 miles of Great Lakes shoreline and thousands of miles of rivers and streams, Michigan offers ample opportunity to traverse the state over the water – no matter the size or speed of your vessel.

While designated water trails are a relatively recent development, use of Michigan’s waterways for transportation isn’t new.

Cedar River State Harbor in Menominee County is one of 83 state-sponsored harbors in Michigan that offer boaters safe public access to the Great Lakes.

Native Americans first used Michigan’s waterways for sustenance and trade, early European settlers used them to transport goods and timber, and water resources were the foundation of Michigan’s earliest manufacturing and shipping industries.

These waterways also had a significant impact nationally.

“The Great Lakes and a network of rivers opened the vast American heartland to a nation moving west. Inland waterways are a road map to much of the nation’s history,” explains a passage from the National Museum of American History’s online exhibition “On the Water: Stories from Maritime America.”

“They guided the travels of Native Americans, explorers from Europe, and streams of newcomers who established businesses, towns, and cities. … Inland waterways helped hold together the people and economy of the nation as it grew throughout the 1800s.”

Michigan consistently ranks among the top three states in the nation for watercraft registrations and boat sales.

Recreational boating has an economic impact of more than $7 billion annually in Michigan, according to data from the National Marine Manufacturers Association.

Michigan consistently ranks among the top three states in the nation for watercraft registrations and boat sales. Pictured here are boaters on Lake Michigan near Grand Haven in Ottawa County.

As boating became a popular pastime, the state set out to provide safe public access to the Great Lakes and inland waters of Michigan.

In 1947, the state Legislature created the Michigan State Waterways Commission – a

seven-member advisory board that works with the DNR on the use of dedicated funds, provided by boaters, for the acquisition, development and maintenance of public harbors and boating access sites.

So began the state’s Great Lakes Harbors Program. The Waterways Commission was granted authority and supporting funds to create a marine “highway” along the 3,000 miles of Great Lakes shoreline.

From 1947 to 1964, the commission developed the majority of Michigan’s harbors of refuge, providing tens of thousands of boaters safe harbors and hospitality as they circumnavigate the state.

In 1966, the commission became part of Michigan’s Department of Conservation, the precursor to the DNR.

“Today, the number of safe harbors has grown as the Waterways Commission continues its mission to provide safe public access to the Great Lakes and inland waters of this state,” reads the Michigan Harbors Guide. “The program’s goal is to locate harbors so that no boater will ever be more than 15 shoreline miles from safety.”

See a map showing how extensive this network harbors has become.

Boaters have paid for much of this harbor network through taxes on marine fuel purchases and boat registration fees. Under the Waterways Grant-In-Aid Program, local units of government are given grant funds for construction of facilities. Federal funding also supports the development of harbor facilities.

“Of the over 80 public harbors, most are operated by our Grant-in-Aid partners,” said Linnae Dawson, DNR recreational harbor coordinator. “GIA harbors are owned and operated by a local unit of government but have received waterways funding in the past.”

Local communities are responsible for continuing operation and maintenance of harbor facilities. The state only considers assuming these responsibilities where local resources are unable to support them, so the DNR operates only 18 of Michigan’s harbor facilities.

Information about planning a day or overnight trip to one of Michigan’s 83 state-sponsored harbors is available on the DNR’s ‘Boating the Great Lakes’ page. Here boaters can find access to the digital harbor guide, including harbor locations, amenities, reservation information and more.

Michigan also has more than 1,300 public state and local boating access sites, both developed and undeveloped.

Hitting the water trailWhile boating has long been a popular pursuit for Michiganders, participation in paddle sports like kayaking, canoeing and stand-up paddle boarding has flourished in recent years.

In 2018, to offer paddling travelers more opportunities, the state first designated water trails – eight waterways totaling 540-plus miles that flow through more than a dozen counties.

A water trail is a designated route on a navigable waterway such as a lake, river, canal or bay, which is designed and managed to create a positive outdoor recreation experience for the user.

They feature well-developed access points, often are near significant historical, environmental or cultural points of interest and often have nearby amenities like restaurants, hotels and campgrounds.

“Water trails naturally are an increasing trend in Michigan and throughout the country, as interest in paddle sports and other water-based recreation continues to grow,” said DNR Parks and Recreation Chief Ron Olson. “We are pleased to help advance these opportunities by recognizing model public water trails that set the standard for the future of Michigan’s water trails program.”

Paul Yauk, the DNR’s state trails coordinator, said that Michigan is in a great position to work with partners to create a statewide water trails program that complements Michigan’s broader trails system.

“Designating these rivers as official water trails shines an even brighter light on some incredible natural resources,” Yauk said. “We fully expect that offering – and expanding – water trail opportunities in Michigan will encourage more outdoor recreation and healthier lifestyles, and also serve as regional destinations that will give a boost to local economies.”

Whether it’s cruising the Great Lakes or paddling down a quiet stream, there are plenty of opportunities to explore Michigan while traveling by water.

If you’re planning a boating or paddling trip, please be aware that rising water levels on Michigan lakes, rivers and streams can present hazards for boaters, swimmers and others enjoying the outdoors. Find tips on keeping you safe in and around higher water levels, plus ideas for lessening the impacts to fish and wildlife, at Michigan.gov/HighWaterSafety.

Village of Roscommon Offices
9:00 am