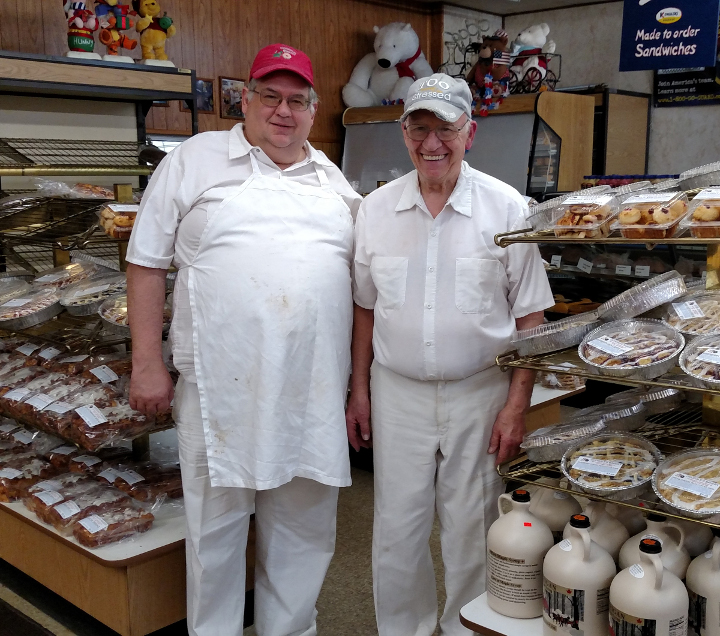 GRAYLING – Loren Goodale, owner of Goodale’ Bakery in Grayling doesn’t have a bucket list of things to do in his lifetime.

Things like parasailing, zip lining, white water rafting, piloting your own plane, and baking are all things Goodale, born in 1938, has done.

He opened Goodale’ Bakery on August 9, 1971 and has owned and operated it during all 45 years in business. What started out as a 12 x 12 building that sold baked goods, has turned into versatile business that now sells Kowalski meats as well as personalized merchandise, hot foods and sandwiches.

Goodale, originally from Plymouth, moved to Grayling in 1967, opening the bakery just four years later. His parents relocated in 1968 and his father was one of three employees when the bakery opened. Goodale has spent most of his life in the retail business, starting when he was just four years old and his parents opened a grocery store that offered home delivery. His baking experience started as a teenager when he would help his mom, Caroline, grease pans for baking and wait on customers. His mother won the Homemaker Champion of the state fair in 1940-1941.

Before opening the bakery, Loren spent 3 -+ years as a Sears catalog merchant in Grayling. He has also been a volunteer fireman, EMT and committee chairman of the Boy Scouts. It seems though, that his calling was to be the owner of Goodale’ Bakery.

‘If you enjoy what you’re doing, it is not work,’ Goodale said. ‘I enjoy life and I enjoy people.’

He has also dabbled in kitchen design and has designed two homes, one above ground, and one below. The home below ground is called an ‘Earth home’; it is a 2500 sq ft. home with 4-10 feet of dirt on top of it and is located in Grayling.

He has also travelled to almost every state in the USA, as well as several countries in Europe; England, Denmark, Sweden, France, just to name a few. He has rafted the upper Gauley in West Virginia, the second wildest river in North America. He’ zip lined in Michigan, Missouri and in the caverns under Louisville, Kentucky.

During his travels to Europe, he noticed that the Swiss were using gliders, and learned that the best way to use a glider was to have a pilot’ license. With that said, he saved his money, and bought himself a plane, adding one more adventure to his life.

In the near future he plans to attend the International Bakers Conference in Las Vegas. Rumor has it that there is a huge Ferris wheel somewhere in the area and another zip line for him to try out. Scratch off more adventures on that non-existent bucket list.

Goodale, his son Loren III, and Linda, his daughter, all work at the bakery which looks like it will be a sweet and tasty treat in the north that has no plans to go anywhere anytime soon. Fortunately for us, neither does Goodale, unless it is on another zip lining or parasailing journey.