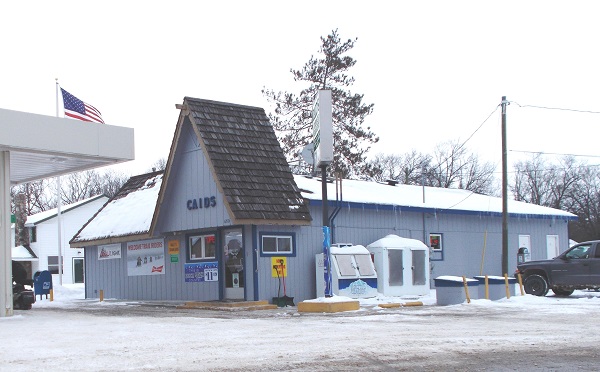 LOVELLS – Lovells can quote its origin as 1889. That was when the Michigan Central Railroad established a station at that particular location on the North Branch of the AuSable River. The Michigan Central spur line, (Jackson, Saginaw & Lansing Railroad), ran from Grayling to Lewiston and serviced a host of logging communities along the way. Kneeland, Bucks Siding and Judge came and went with the tall trees. Against all odds Lovells still exists.

Much of Lovells success can be traced back to the foresight of Thomas E. Douglas. Douglas moved from Saginaw to Grayling in 1893 to work for R. Hanson as a bookkeeper in the Hanson Lumber Company. In 1898 Douglas built a sawmill and general store in Lovells. In 1902 fire destroyed the store. Douglas rebuilt the store in 1903. By 1903 the logging industry started to wind down. Douglas realized that the Lovells area had more to offer than just logs.

The North Branch of the AuSable River, offering car loads of the fish identified as the Grayling and Brook Trout, ran through the center of the settlement and just to the east a bit were the small waters at the head of the Big Creek watershed, another premier although lesser known, trout stream. The new growth, covering the logged over areas, provided excellent cover for deer and other small game and the spring fed rivers ran clear and cold.

Recognizing the areas potential attraction to hunters, fisherman and tourists, Douglas built the Douglas House in 1916. The hotel offered fare and lodging to sportsmen and visitors from all over the United States. At first the railroads brought in visitors by the train load. Private railroad cars and huge refrigerator cars were parked on the siding waiting to be filled with deer and trout. Seeing the growing success of the hotel, Douglas formed the North Branch Outing Club in 1916 and housed it in the hotel.

The hotel attracted such famous people as Henry Ford, Harvey Firestone and Charles Nash. Guests of the hotel also included Detroit’s Mayor Marx and Thomas Edison. Henry Ford was one of the originators of the famous AuSable Trout and Game Club. Douglas’s daughter Margaret, according to one source, reported her mother frying as many as 500 trout in one night in addition to baking 12 to 14 pies per day to feed the guests.

In 1913 automobiles began to arrive following the old logging trail to Lovells. In 1925 the railroad tracks were removed, thus signaling the close of one era and the opening of another.

Lovells is more than a town. It’s a township created by a petition in 1911 that split Maple Forest Township into two pieces, one of which became Lovells Township. The Post Office was originally established in the town of Judge in 1892 and was moved to Lovells in 1909. The Post Office operated in Lovells until 1936 when the postal services were consolidated in Grayling.

Many of the original visitors built lodges and cabins along the river, Nash Camp being a notable remnant. One of the early visitors was a Dr. Grover from Columbus, Ohio. His son was a pilot and would fly the doctor up for a week or two of fishing and then fly back to take him home.

In addition to the Douglas family, other notable early settlers included the Kellogg family. In 1903 James Kellogg loaded his family on a flat bottom scow along with all their possession and the family cow and poled their way fifteen miles up-river to a point where North Down River Road now crosses the river. James set up a farming operation with various types of livestock. He built a water wheel to generate electricity to run his cream separator, grain mill, sawmill and to provide current to the house. In 1909 James, who was better known as Ed, built the Lone Pine School House that still stands on the family homestead. It was also referred to as the Kellogg School since there always seemed to be at least one Kellogg enrolled. In 1906 another school house was moved to Lovells from the former settlement called Judge. It was clapboard construction instead of log and served the community for many years.

There were many other early settlers whose contributions to the Lovells community still stand today. The Ernst family, the Stillwagon’s and the Caid’s. Visitors to the Lovells area can still purchase gasoline from Caid’s store on the corner. Across the road is what was originally Paul’s Tavern with summer seating on the lawn looking out over the river. Paul’s has become a popular stop and congregating point for snowmobilers in recent years. In 1956 Frank and Neva Wood opened the AuSable Trading Post with sporting goods, shoes and archery equipment.

The history of the area would not be complete without the mention of K.P. Lake, Shupac Lake and Warblers’s Hidaway. The “North Branch Store” still operates at Kellogg Bridge and North Down River Road. The store was opened in 1939 by Jake Stillwagon to provide groceries and gasoline to hunters, fishermen and neighborhood residents and still operates today.

On a personal note, I started fly fishing on the North Branch of the AuSable river over fifty years ago. It’s still my favorite part of the river system. Dam Four, the Sheep Ranch, Jackson Hole and all the little grassy islands along the way. A regular stop was Hartman’s Fly Shop to pick up a few new flies and to learn what and where the fly hatch’s were happening.

Speaking of fly fishing, any fisherman visiting Lovells should make time to visit the Lovells Museum located behind the Township Hall. The museum is focused on the history of fly fishing on the North Branch and is a worthwhile stop.

To close out this dissertation on Lovells I would like to thank Sheryl Biggs of Grayling for the loan of a book published by the Cheerful Givers Club and the Lovells Heritage Days Committee titled “Memories of Lovells” a collection of stories of the Lovells area from 1889 to 1990. The other major resource for this story has been that classic “The Old AuSable”, written by Hazen Miller.

Spring is coming and the Crawford County Museum will soon be open for visitors to learn about all of Crawford County’s history. Stop by and spend some time with us.