The pen is mightier than the bazooka 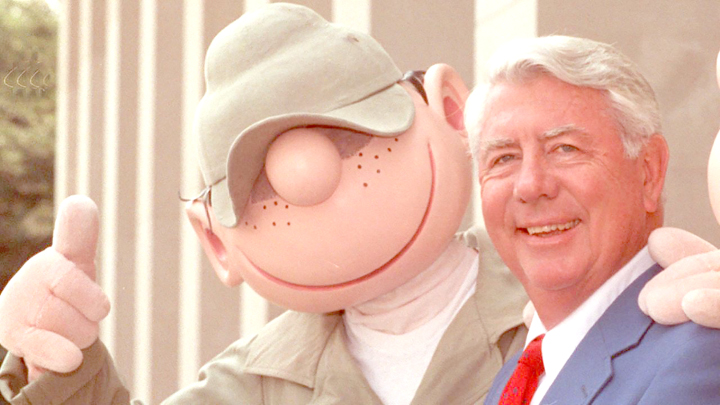 Special to the Voice

The name Mort Walker may not mean much in the average household today, but his work has appeared in millions of homes throughout the past six decades. Each day, newspaper readers welcome into their homes ‘Beetle Bailey’ and ‘Hi and Lois,’ two of the most popular comic strips to grace the newsprint page.

Mort passed away on Saturday, Jan. 27, at the age of 94, leaving behind an incredible legacy of fun and laughter through his comic strips.

I have never met Mort Walker in person. However, I corresponded with him for a short time back in 2014. At the time I was writing a book called ‘Bullying is No Laughing Matter,’ for which I partnered with various cartoonists on the subject. Mort was one.

Now, I had grown up reading newspaper comics. They were part of everyday life and Beetle Bailey was one of my regulars. So, being in contact with Mort was akin to communicating with any major celebrity. There is that wow factor which goes with just emailing someone like him.

Originally, I did not know how to reach Mort. So, I received permission from King Features Syndicate to use a Beetle Bailey comic in the book. It wasn’t until the book was about to go to press that I had a chance to communicate with Mort directly via email.

Mort was one of the nicest cartoonists I had talked to during the project and very encouraging on the subject of bullying. So, when he told me he had been a bully, I was shocked. How could this nice guy ever have been a bully?

Then shared with me this story.

‘I was once a bully. My father was a westerner and believed that men should train to protect their families in the ‘wild wild west.’ Our basement was filled with exercise equipment, punching bags, weights, boxing gloves, etc. We trained every day. I was so muscular that the gym teacher would parade me in front of the class. I won boxing and wrestling matches and considered myself the strongest kid in the world.

‘If anyone opposed me I’d just punch them in the chin. I’d go out looking for gang members to fight and was proud of my prowess. This fantasy went on until my buddy across the street said he couldn’t play with me anymore. His parents said that they worried he’d get beat up in one of my fights. It made me stop and think and I realized I’d created a lot of guys who didn’t want to be with me in case I caused a brawl. I changed immediately and started making friends instead of enemies.’

Most of the bullying stories I had heard while writing the book had been from the victim’s viewpoint. Mort was the first to let me see it from the bully’s side. I could see by how he told his story he was deeply sadden by his behavior back then.

After a brief stint in the army after high school, Mort created Beetle Bailey for King Features Syndicate in 1950. The strip was originally about Beetle as a college student. The idea didn’t catch on with readers though and was in danger of being dropped by the syndicate when Mort came up with the idea of changing the strip’s setting to an army camp.

Obviously the idea caught on. Eventually, more than 1,800 newspapers would come to carry the strip.

It even developed a spin-off strip in 1954. Beetle went home to visit his family and readers were introduced to his sister, Lois. She was married to Hi. And, yes, you guess it, ‘Hi and Lois’ were also picked up by King Features for their comic strip.

All in all, Mort created nine comic strips. Most he created with the help of other cartoonists. The other seven never quite gained the popularity of his first two however.

Over the decades, Mort won numerous awards for his work including Cartoonist of the Year, Best Humor Strip, Lifetime Achievement Award, Fourth Estate Award, U.S. Army Certificate of Appreciation for Patriotic Civilian Service, the Golden T-Square Award from the National Cartoonists Society and many more.

Eventually Mort’s sons, Greg, Brian and Neal took over the duties as cartoonist for both Beetle Bailey and Hi and Lois. Not surprisingly, Mort was still suggesting gags and doing some artwork days before his death.

Many of Mort’s fellow cartoonists have saluted and shared stories about him on social media since his passing. Mike Lynch said his first meeting with Mort at the Reuben Awards endeared him to the man forever. ‘I was surprised at the encounter. Mort was open, friendly and treated me as a confidante. I genuinely felt for him,’ said Lynch.

Rest in peace, Mort. Thank you for all you gave to us. We salute you.