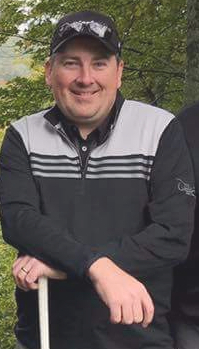 ROSCOMMON — It’s a small and pretty young squad, but that doesn’t concern first-year Roscommon boys golf Coach Dan McGinnis unduly as he prepares the Bucks for the start of the 2018 season.

He guarantees the Bucks will be a better team at the end of the season than where they started, and is confident that they’ll be reaching their peak when the MHSAA regional tournament rolls around.

But, whether that means the team, or any individual members will be playing well enough by then to qualify for the state championships is pretty much an open question as the Bucks have only one senior, three juniors, one sophomore and three freshmen comprising the eight-man squad.

“With only eight players on the team, there’s a pretty good chance all three freshmen are going to see significant time,” McGinnis said. “It (the weather) has been brutal, honestly, but fortunately for us we’re able to take advantage of the Craft Center here in Roscommon, and the hitting net in there. So, we’ve been able to hit some balls and putting on the carpet in there. But, it’s just not the same as getting outside, obviously.”

Skyler Rohde is the only senior, and McGinnis assumes that he played last year. But, he’s really coming in cold and has no idea who among the group has experience playing on the varsity level.

The three juniors on the squad are Riley McNamara, James Herrick and Jory Gailitis. Josh Serum is the only sophomore, and the freshmen include Jackson Strickler, Drew Jaskowski and Luke Verbeke. Josh Fairbanks is an eighth grader who is practicing with the team, but won’t be on the roster as a scoring player.

McGinnis believes there’s a lot of potential on the team from what he’s seen of their performance in the indoor facility.

“I’ve been able to work on some fundamentals with my instructional background, and make some changes in their swings all ready,” said McGinnis. “There’s been some huge change in the quality of their swings now.

“Of course, the ball’s only going 10 feet. But, the things we’ve been able to do in the last two, three weeks have been really impressive. I’m excited to get the kids outside and have them improve their swings.”

The Bucks will compete in the Traverse City Central Invitational, a two-day tournament at the end of the month and McGinnis expects the Bucks to be severely tested with some of the best programs in the state there.