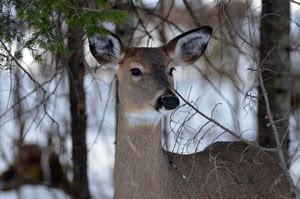 Deer hunting regulations for the 2021 season were approved Thursday by the Michigan Natural Resources Commission at its regular meeting, hosted virtually. The changes, aimed at further simplifying deer regulations and removing barriers to hunting participation, go into effect with the start of the 2021 deer hunting seasons in September.

The regulations will provide additional opportunity, flexibility and cost savings for hunters and – based on existing and projected data the Department of Natural Resources uses to gauge the impact of proposed regulations – are not expected to have a significant negative effect on the deer herd or the quality of deer hunting.

“Our goals with these regulations are twofold: to make hunting regulations easier to understand and follow in Michigan, and also to manage Michigan’s abundant deer herd,” said DNR deer program specialist Chad Stewart. “We feel that these changes move us in the right direction.”

The northernmost DMUs of the U.P. are closed to antlerless deer hunting in all seasons.

Archery hunters in portions of the Upper Peninsula may pursue antlerless deer on their deer or deer combo licenses. DMUs 127, 066, 131, 042, 031, 007 and 048 will be closed to antlerless harvest during the archery seasons.
The expanded urban archery season through Jan. 31 is now permanent in Wayne, Oakland and Macomb counties.
Upper Peninsula supplemental and recreational deer feeding regulations have changed, including: A permit is no longer required for supplemental feeding in the Upper Peninsula.