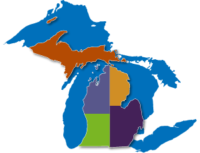 Northeast Lower Peninsula
Cheboygan: Lake trout, steelhead and Chinook were caught off Lafayette Point and Lighthouse Point on Bois Blanc Island when trolling spoons, meat rigs and spin-glo’s. Anglers were fishing in 40 to 60 feet, but some days were in 100 to 120 feet depending on wind and water temperature.

Rogers City: A strong mixed-bag fishery continues with lake trout, steelhead, pink salmon, walleye, coho, Atlantic and Chinook salmon. Fish throughout the water column while focusing on where the thermocline is located. The best depths seem to be 40 to 90 feet. Watch the wind, as a northwest blow will push cold water out of the area, leaving warm water top to bottom. Most are using spoons, cut bait, dodgers and flies or squid. Hot colors were green, blue, orange, black and white, or glow early and late. Chinook were caught early morning or late evening. Fish were eating 3- to 4-inch smelt so use lures that resemble them.

Presque Isle: Also has a very good fishery taking place with trout, salmon and walleye being caught. The shallow water was cold, and anglers were marking baitfish. Try 40 to 90 feet and scatter lines throughout. Spoons worked best, but try dodgers, flies, squid and spin-glo’s.

Alpena: Lake trout, steelhead, pink salmon and the occasional coho were caught when trolling spoons and spin-glo’s off the Nordmeer Wreck and Thunder Bay Island in 70 to 140 feet. Fish were found mainly in the top 70 feet. Those trolling crankbaits took a few walleye and brown trout inside of the bay. The walleye bite was best at night.

Oscoda: Was also producing lake trout, pink salmon, steelhead, walleye and the occasional coho when trolling spoons and spin-glo’s in the top 70 of waters 80 to 140 feet deep. There have been plenty of pink salmon to be found. A few walleye were found in shallower water. Hot colors were blue, chrome, yellow, orange and purple. Pier anglers caught rock bass, smallmouth bass and freshwater drum when floating crawlers.

Higgins Lake: Those targeting lake trout did best when jigging in 90 to 110 feet and using kastmasters, sand kickers or small spoons. Perch anglers were sorting through the small ones but did find a few keepers in 20 to 25 feet. No word on brown trout. Good action for rock bass continues.

Houghton Lake: Fishing was slow, but anglers still were getting a few walleye in the East Bay when trolling a purple harness with crawlers or leeches in 14 feet. Bass have been caught, and a few pike were taken here and there. Bluegills were found off the weed beds in 8 feet or so.

Lake St. Helen: Panfish and bass are being caught along the weed beds.

Tawas: Walleye were caught straight out from the Tawas River in 30 to 70 feet with a crawler or body bait and inside the bay near the weed beds in 15 to 25 feet with a lindy rig and crawlers. There was a large mayfly hatch with the warm muggy weather, which may have slowed the bite. Steelhead, lake trout and pink salmon were caught out towards Au Sable Point in 80 to 100 feet with spoons and dipsey divers.

Northwest Lower Peninsula
Harbor Springs: Boat anglers did well for lake trout and the occasional salmon. Most were fishing up around Harbor Point with spoons, spin-glo’s and peanuts. Salmon tend to hit spoons and meat rigs. Lake trout were 75 to 100 feet down in 100 to 130 feet while the salmon were up higher.

Petoskey: Most boat anglers were fishing the Harbor Springs side of the bay. Charter boats were starting to pick up a couple salmon. The Bear River had good water levels but few anglers up at the dam. Slow fishing at the Bobber Hole near the mouth. Those using crankbaits, worms and minnows found the occasional rock bass or bullhead. Pier anglers may find smallmouth bass along the rocks.

Charlevoix: Anglers continue to target smallmouth bass in the channel, though success was spotty. Freshwater drum and rock bass were caught. Most are using live or artificial crawlers and leeches.

Lake Charlevoix: Walleye were caught off Young State Park and in the South Arm when trolling.

Traverse City: The East Bay was producing a few smallmouth bass near Elk Rapids. In the West Bay, a couple lake trout were caught when trolling or jigging.

Leland: Lake trout and salmon were caught between here and North Manitou Island.

Lake Leelanau: Walleye were caught in the South Lake, south of the narrows.

Platte River: Is producing a few smallmouth bass. The trick is to wade upstream and cast down near the weed beds.

Frankfort: The number of Chinook taken was on the low side; however, the ones caught were 25 pounds or more. Most were found 50 to 90 feet down in 120 to 200 feet. Lake trout numbers remain steady.

Portage Lake: Warm weather continues to raise water temperatures, and the recent rain sparked yet another mayfly hatch. Anglers working the drop-offs in 16 to 24 feet picked up a few bluegill, perch and bass.

Manistee: A few salmon were caught 40 to 70 feet down in 120 to 150 feet along the shelf and slightly north in deeper water with spoons and meat rigs. Lake trout were straight out and near the bottom in 100 to 130 feet. Those on the stub pier caught rock bass using crawlers.

Manistee River: A couple steelhead were caught on spawn, beads or a jig and wax worm near Suicide Bend. Brown trout were caught on spinners or crank baits. Bass and pike have been caught throughout the river.

Ludington: Fishing was slow, and windy conditions made it hard for boat anglers. A couple salmon, lake trout and steelhead were caught straight out in 110 to 150 feet.

Upper Peninsula
Keweenaw Bay: Recent storms and wind had the bays all mixed up. Anglers still were getting a fair number of lake trout along with a few salmon; however, they were putting in a lot of time trying to find them. Jigging for lake trout seemed to work best.

Little Bay De Noc: The best walleye action was from Breezy Point south to Round Island trolling a crawler harness or stick baits in 14 to 25 feet both early and late. Fair to good smallmouth action in the grassy areas around the mouth of the Tacoosh River when casting plastics or near the mouth of the Ford River, but the fish were smaller. Perch fishing was fair near Kipling in 12 to 30 feet with crawlers. Salmon anglers have reported very few catches in the area this season. Those with large boats have been heading to Green Bay waters or over to the Summer Island area for better fishing.

Manistique: When salmon anglers could get out, catch rates were few. Those after lake trout reported fair to good catches southeast of the buoy in 120 to 180 feet. River anglers should be looking for early salmon as they start to show up the end of July.

Indian Lake: Was producing some walleye.

St. Marys River: Fishing was good for most. A decent number of Atlantic salmon and whitefish were caught behind the powerhouse. Those fishing the lower river caught walleye, pike and smallmouth bass.

Raber: Had fair to good walleye action when trolling Raber Bay in the early morning. Troll south of the boat launch along weed beds with shad-colored crankbaits in 8 feet.

Detour: Walleye anglers heading out from the DNR launch reported good catches of walleye up at Swedes Point. Try planner boards with 6-inch, shad-colored crankbaits in the early morning or late evening. Walleye anglers had success using crawlers or minnows with a slip-bobber in 8 to 12 feet.

Drummond Island: Cisco are still being caught at Little Trout, Big Trout and Burnt islands when jigging a brown or red teardrop with wax worms in 25 feet.

Cedarville and Hessel: Yellow perch are being caught at the Island #8 Bridge with worms or minnows off the weed beds in 6 to 8 feet. There are reports of perch being caught at the east end of Snows Channel, at Connors Point. Try close to the weed beds when casting a small white or pink twister tail jig in 4 to 6 feet. Middle Entrance to the Les Cheneaux Islands is producing yellow perch at the mouth of Peck Bay in 4 to 8 feet with small worms or shiners. Hill Island Road, located 1 mile east of Cedarville off Highway M-134, has been good for young anglers catching sunfish, rock bass, perch, smallmouth bass and even a few nice largemouth bass. For Hessel, anglers reported good northern pike fishing in the early morning with large minnows and creek chubs under a bobber or when casting black and chrome crankbaits in 8 feet outside the pier. Yellow perch are still being caught around the finger docks.

St. Ignace: Those trolling spoons and flies in 120 to 140 feet on the backside of Mackinac Island had no luck. Nearby, walleye were caught on the Pine River when trolling a crawler harness from the boat launch to the rapids. A couple pike also were caught. On the Carp River, walleye and perch were caught when drifting and bottom bouncing worms and leeches at the sea wall.