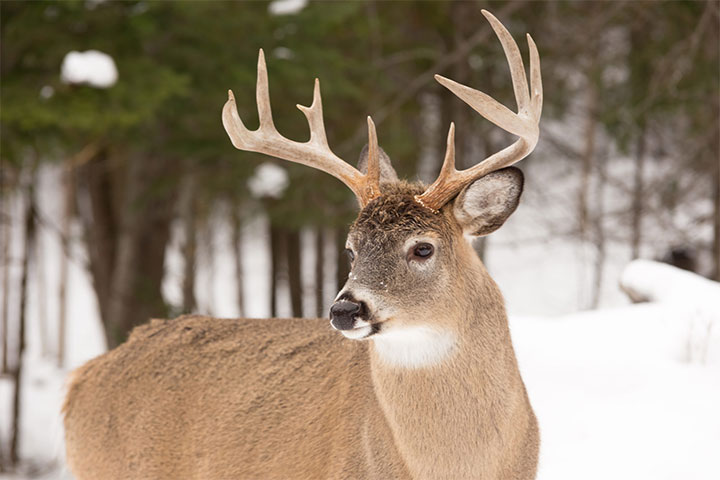 The DNR and Natural Resources Commission banned baiting and feeding in the lower Peninsula and some core areas in the upper Peninsula. The effort aims to combat Chronic Wasting disease (CWD) which was found in deer in Mecosta, Montcalm and Ionia counties.

According to the Center for Disease Control and Prevention (CDC), Chronic Wasting Disease is a prion disease that affects deer, elk, reindeer, sika deer and moose. It has been found in North America, Norway and South Korea, and in

Affected deer may take more than a year before developing symptoms, which can include drastic weight loss (wasting), stumbling, listlessness and other neurologic symptoms. CWD can affect animals of all ages and some infected animals may die without ever fully developing the disease. CWD is fatal to animals and there are no treatments or vaccines.

DNR Wildlife Biologist Bruce Barlow said the ban was instituted in part because when deer concentrate over a food source, there is a higher probability for the spread of the disease. He said infected deer salivate over the food thus transferring the disease to other deer.

He hears the hunters and others say they are upset with the ban. He said the ban is aimed to offer the deer population its best chance at survival.

“Don’t underestimate the impact this disease has on the population,” Barlow said of the deer herds. “This is the right thing to do for the wild deer population.”

The lack of baiting, some say, will cause higher levels of starvation. However, Barlow said deer don’t have to work for food in the wild.

“There is plenty of food in their natural habitat,” Barlow said. “They don’t need to rely on human handouts.”

But to businesses that depend on the sales of bait, such as Ed Beckley, owner of M-65 Bait Shop in Whittemore, the ban is a blow to their annual revenues.

“Deer feed is 60 percent of my business,” Beckley said. He’s owned the store for two years, but it’s has been in his family for 33 years.

Beckley said he can still legally sell the bait. It is just illegal for people to use it. He has already sold 11 tons of corn and seven tons of sugar beets.

“I would stop selling bait if I knew the deer feed was causing an epidemic,” Beckley said. “I’m concerned about the herds, too.”

Beckley said he doesn’t hunt with bait but knows hunters, many who hunt on state land, that often use it – making it easier to draw deer in.

But he, like others, doubt the science behind the decision to ban baiting.

Houghton Lake resident Kevin Weaver isn’t a hunter, but he is against the ban.

Some hunters and store owners are hoping that bills currently in the Michigan Senate and House will offer some relief. The bills seek to reverse the ban.

Mark Bartholomew, co-owner of Bart’s Fruit Market in Prudenville is “absolutely” against the ban.

He said it reaches farther than most people think. Bartholomew normally employees 30 people a season at his store. This season he hired four people.

“When people stop on the way to their hunting spots, they buy gas, snacks, beer and more. They go for meals and local restaurants and hang with their friends at neighboring bars. If they aren’t hunting – they aren’t stopping,” Bartholomew said.

He said this hurts the mom and pop stores as well as increases the deer populations – thus causing more car-deer crashes.

The ban is not all-encompassing. Hunters who are 100 percent disabled veterans or blind may use single-bite baits in counties where baiting is banned – during Liberty and Independence Hunts only. Per the DNR, eligible hunters were able to start their baiting Sept. 9.

The ban does not apply to food plots, defined by the DNR as naturally occurring foods, standing agricultural crops, or food placed as a result of using normal agricultural practices.  Yet, constructing or maintaining any food plot or any artificial garden to attract wildlife on public land is prohibited.

“What is the difference,” Bartholomew asks, besides “food plots” are legal while “bait piles” are not.

According to the DNR, is merely how the food sources occur, naturally verses artificially to lure wildlife.

While the CDC have no reports of cases involving humans, some of their studies indicate potential risks to non-human primates, such as monkeys, that eat meat or encounter the infected animals.

CDC representatives say these studies raise concern of the risk CWD has to humans. Since 1997, the World Health Organization has recommended that it is important to keep the agents of all known prion diseases from entering the human food chain.

Barlow said people need to realize how vital the baiting ban law is to the overall health of the deer herd.

Bartholomew said even people who don’t hunt, and just feed deer to watch them from their homes are affected by the law.

“The government has just made them criminals,” Bartholomew said.