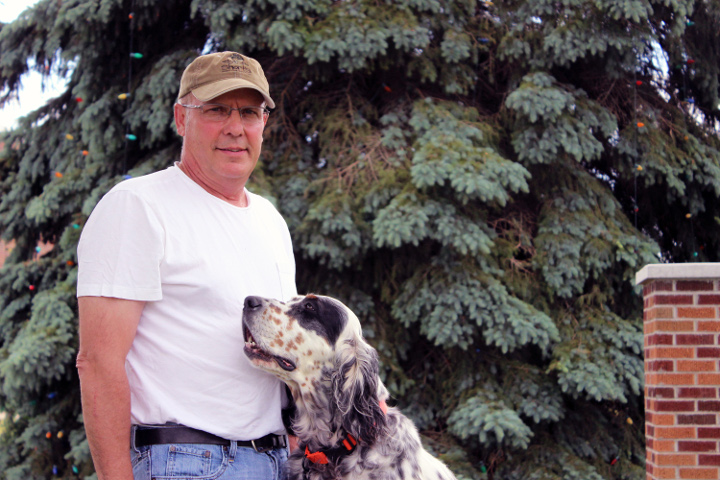 REGION – The temps are getting cooler and leaves have begun changing colors. It’ bird hunting season and time to take the dogs to the woods.

Woodcock season is short. It runs Sept. 23 to Nov. 6. And if you have a bird dog, it can be difficult to keep them trained during that time period.

So what to do?

If you are Harold Weiss of St. Helen, you band woodcock chicks.

Weiss said that outside the season, there are limits to when and where a dog can be trained in the field. Woodcocks hatch in early spring, with the peak around May 1-14. Dogs are not allowed to run unleashed in the woods from April 15 to July 1.

Woodcocks are upland bird that nests on the ground, but migrates south through established runways, similar to waterfowl such as ducks and geese. In the early part of the 20th century, market hunting and habitat degradation put a significant amount of pressure on the small birds, as well as other wildlife.

But dedicated volunteers such as Weiss make it possible for the U.S. Fish and Wildlife service to conduct accurate counts of the birds.

The banding program started in Michigan started in the 1960s. Weiss has been banding since 1989 and is one of about 100 volunteers across the state who participates in the national program.

New banders must first study under a mentor and then undergo biannual training to maintain their certification. Their dog also needs to be seen in action by another bander before it can be admitted to the program as well.

Weiss said there are more woodcock banded in Michigan than any other state; all done with volunteers.

Instead of carrying a gun as he would in the Fall, Weiss’ Spring weapons are a banding net, gloves and bands. He uses his English Setter, Stella, to find the adults and then the nest, which can have a brook of around four chicks. He carefully picks up the chicks and bands them on the leg. His wife, Andrea, accompanies him on many of his trips, assisting in the effort.

‘The dog points the hen, but you still have to find the hen,’ he said. ‘Then you have to see if there are chicks around.’

He said finding the birds and the nest can be tough.

‘They are harder to find than mushrooms. Mushrooms are a piece of cake,’ he said.

Once banded, Weiss notes the location the birds were found and sends the records to the U.S. Fish and Wildlife Service. Information collected from the bands turned in by anyone finding a bird helps scientists to learn about the migration of the species.

Weiss said banding chicks is a great way to get out in the woods with his dog.

‘I wanted to do something (with Stella outside,) other than just during the Fall hunting season,’ Weiss said. ‘It allows me to get out and have a spring run (with the dogs).’

Weiss said the experience is gratifying, especially when you come across a bird you’ve seen in the past.

‘I have banded a chick and the following year I found a hen on another clutch (in the same area). When I caught her I saw that she had MY band on her,’ Weiss said.

Weiss equates the experience to hunting in the fall.

How does Huron Pines plan its river projects?