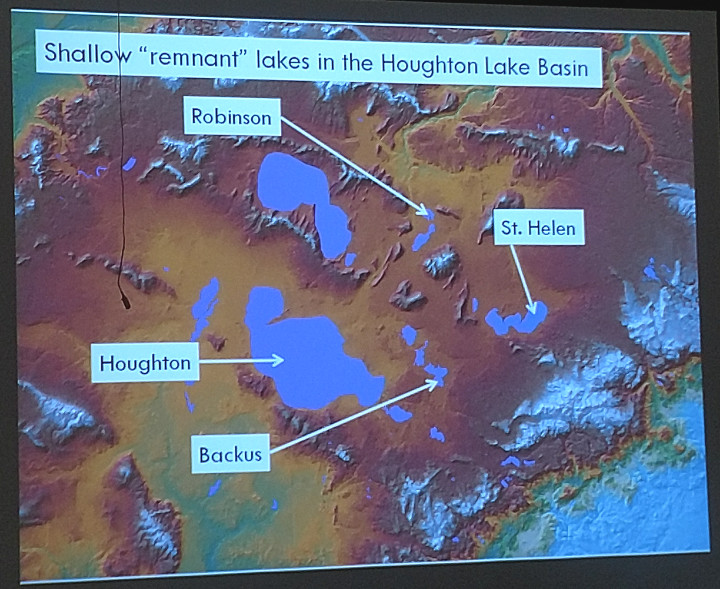 HOUGHTON LAKE – Roscommon County has had the motto ‘Michigan’ Other Great Lakes’ to help promote Houghton Lake, Higgins Lake, and Lake St. Helen. It was recently discovered that this area might have what some call ‘Michigan’ First Great Lake.’

On July 2, Randall J. Schaetzl, professor in the Department of Geography at Michigan State University, came to the Roscommon County Road Commission office to talk about Glacial Lake Roscommon.

Geologists working with Schaetzl had been looking at aerial maps of Michigan, and began dating the sand and gravel deposits in the area. They discovered something that changed all their earlier thinking about glaciers that covered the state over 24,000 years ago.

The ice had reached its extent in the area 24,000 years ago, and then had slowly retreated. Or so everyone thought. Schaetzl’ work showed that sand along the north shore of Higgins Lake was 23,100 years old, leading him to determine that ice left the area much, much (7000 years!) earlier than originally thought. It was thought that during the ice age, glaciers covered Michigan, freezing from the east and west inward, leaving the Muskegon River area unfrozen as an outlet draining the area.

By observing the ridges and hills in the area, and by dating the sand and gravel that was deposited by the melting ice, Schaetzl, his students, and colleagues determined that the glaciers opened up very early in this area, creating a ‘hole in the doughnut’ opening centered on Roscommon County.

This unfrozen ‘hole’ was then flooded with water, forming the newly named Glacial Lake Roscommon (GLR). This lake covered all of Roscommon County and some of the surrounding counties, spilling out at low spots such as at West Branch and Meredith.

As the glaciers receded, the lake persisted, possibly for as long as 7000 years. The Dead Stream Swamp is the floor of one of the later stages of this lake. Many of the lakes in the region are remnants of Glacial Lake Roscommon, notably Houghton Lake, Robinson Lake and Backus Lake. The ice also left many ridges of sand and gravel that cross the region, as well as three notable ‘deltas’ that formed in the lake.

Schaetzl and a team of researchers from around the nation, as well as local specialists, will be studying GLR, taking core samples in the shallow lakes and dating more sand from the many gravel pits in the region.

‘We are rewriting the glacial history by studying this,’ Schaetzl said, noting that there may be no other lake anywhere on Earth exactly like Glacial Lake Roscommon.

The team began their studies last winter, and will continue for the next four years.

Since there were no animals in Michigan at that time, according to Schaetzl, they do not expect to find dinosaur bones or evidence of other prehistoric animals. But they will be studying core samples, looking at pollen, seeds, and vegetation in the samples to determine what this cold, barren landscape may have looked like while it was surrounded by ice – this hole in the doughnut that we now live in.