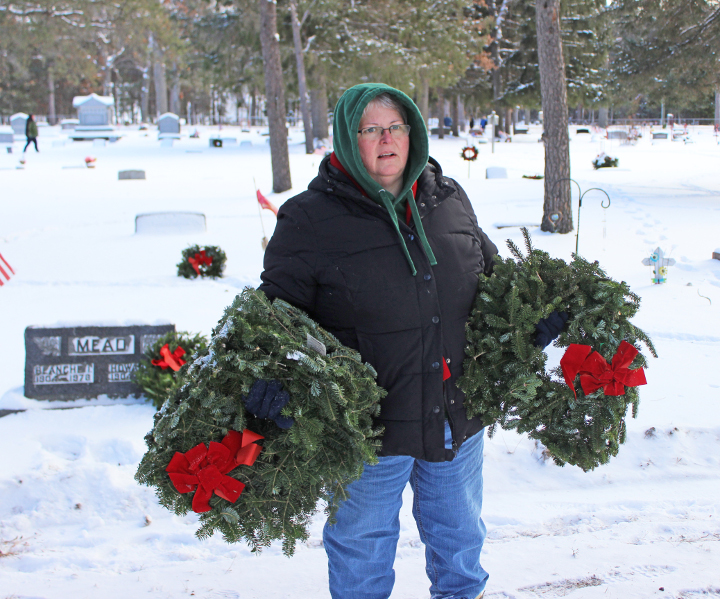 REGION – Wreaths Across America, a National ceremony to place a live, balsam fir wreath to the headstone of every veteran, made its way to Roscommon and Crawford Counties Dec. 16.

Instead of the 140 wreaths ordered, volunteers were able to place 340 wreaths at cemeteries around the county. Pioneer Cemetery in Crawford County had wreaths on all 246 veterans’ gravestones. 32 wreaths were placed at Roscommon Village Cemetery and the remainders were distributed to cemeteries in Gerrish, Markey and Lyon townships.

A ceremony was held at Pioneer Cemetery at 11 a.m. led by William Fensch, commander of American Legion Post 96 with members of Girl Scout Troop 50945 assisting by laying a decorated wreath at the chapel.

‘We are not here to decorate graves. We are here to remember not their deaths but their lives,’ Fensch said about the deceased veterans.

As the volunteers found a veterans grave, they brushed snow off the headstone, read the vet’ name, thanked them for their service, and laid the wreath by the headstone.

Two dozen volunteers came out for the day, many of whom were veterans themselves. Among them was Connie Wood whose (past) husband was a friend of Kevin’.

‘Richard and Kevin were in the Guard together. They worked together for 27 years,’ Connie said. ‘I wondered why Richfield (township) wasn’t involved. I’m going to do what I can to get Richfield involved next year.’

Wreaths are sponsored each fall by anyone wanting to donate to the program. Wreaths can be placed at any cemetery. For more information, visit WreathsAcrossAmerica.org.