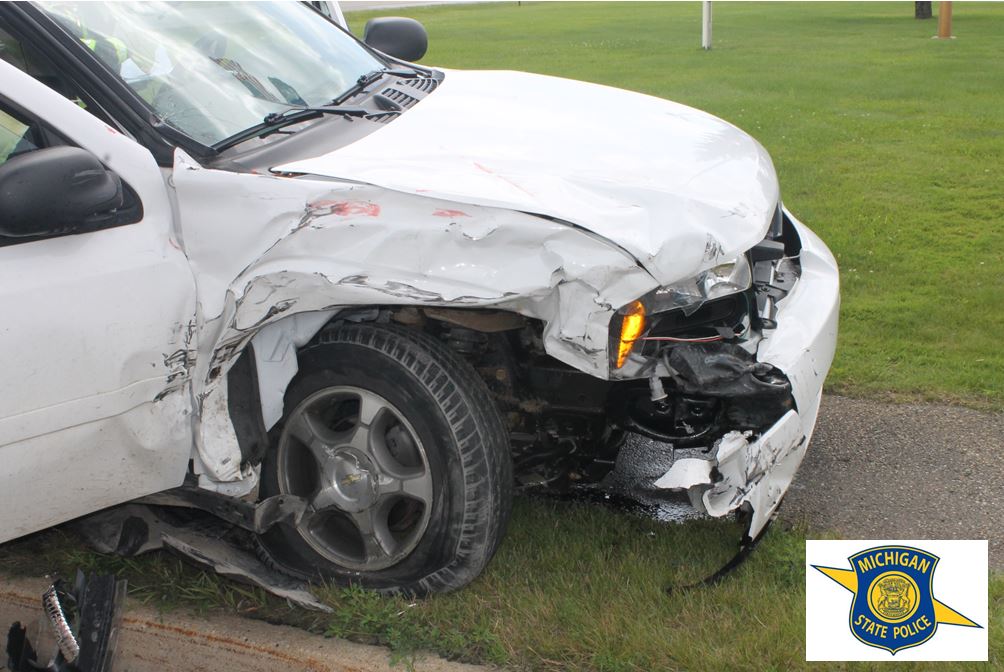 On duty post personnel observed the crash from inside the Houghton Lake State Police Post and responded immediately on foot and in vehicles. The crash occurred in Roscommon Township of Roscommon County at the corner of North Harrison Road and West Lake City Road.

Preliminary investigations indicate that a 68-year-old woman was driving west on West Lake City Road and failed to stop at a red traffic signal. She entered the intersection striking a Roscommon County Road Commission pickup broadside.

The driver of the pickup was travelling south on North Harrison Road and had the right of way with a green traffic signal.

After striking the pickup, the at fault vehicle continued through the intersection coming to rest in the front lawn of the Houghton Lake State Police Post after striking a Ford F-150 head on.

The Ford F-150 had been stopped on east-bound West Lake City Road waiting for the light to turn green.

Houghton Lake EMS assisted troopers on scene and transported two drivers to local medical care facilities for injuries not believed to be life threatening. Troopers were also assisted by the Roscommon Township Fire Department and the Roscommon County Sheriff’ Department.

Alcohol was not a factor in the crash.

Troopers remind motorists distracted driving is not limited to phones, radios, pets, and other people in the vehicle. Running late to a delivery or appointment is just as distracting if not addressed with patience. Troopers remind drivers who are behind schedule to take a breath, take their time, and arrive safe.

Troopers could not be reached for comment at 6:02 p.m. to indicate whether injuries were sustained by either driver, or whether citations were issued.

Fire danger is high around the state