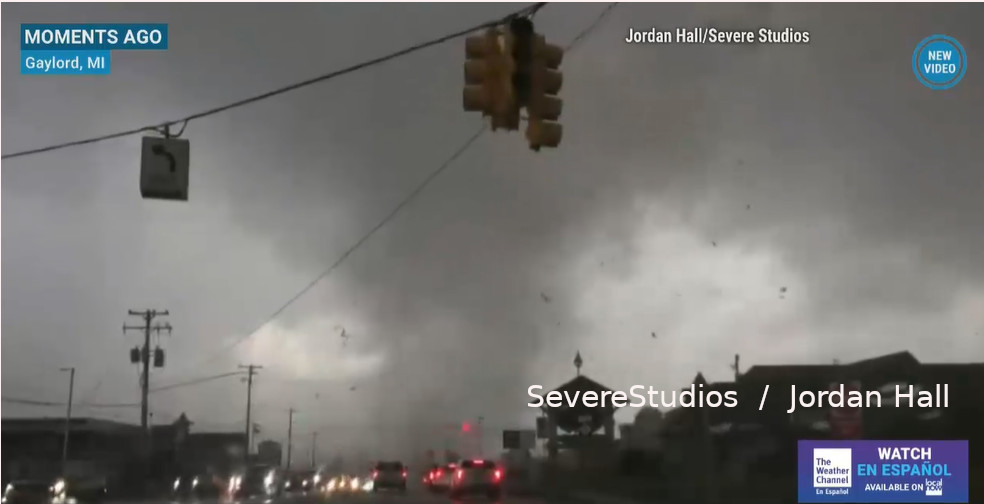 NOTE: Due to the ongoing emergency in Gaylord, residents are asked to shelter in place. The City of Gaylord has imposed a 7 p.m. curfew that will be lifted tomorrow morning at 8 a.m.

GAYLORD – The Michigan State Police (MSP) said patients from the tornado that touched down in Gaylord this afternoon have been taken to Otsego Memorial Hospital (OMH) in Gaylord, Grayling Hospital, and McLaren Northern Michigan Hospital in Petoskey. At this time, MSP confirmed 23 patients were treated at OMH. One person is confirmed dead.

There will be a joint news conference with state and local officials at 10 a.m. at the Kirtland Community College Gaylord Campus, located at 80 Livingston Blvd.

Significant damage has occurred to homes and businesses along West Main Street in Gaylord when the tornado touched down about 1600 hours. Trees and power lines are down and blocking roadways.

Stephanie Verlinde, team leader at Goodwill, said, “Everyone made it out. Some with minor injuries.”

Consumers Energy has reported over 9,272 homes and businesses are without power primarily across Gaylord, as well as Frederic, Waters, Mancelona, Alba, Leetsville and other communities across Northern Michigan. I-75 is closed at the Northern Gaylord exit.

Estimated restoration time is tentatively 2 a.m. on May 21.

A shelter is being established at E-Free Church in Gaylord located at 1649 E. M-32. The Red Cross will be setting up at that location.

“We’re grateful to the police officers, firefighters, EMTs, utility workers, and so many others responding on the ground,” Whitmer said.

Watch for additional information from the Michigan State Police as this story is evolving.

VIDEO link of damage to Goodwill in Grayling.