Our Lady of the Woods Shrine gets makeover 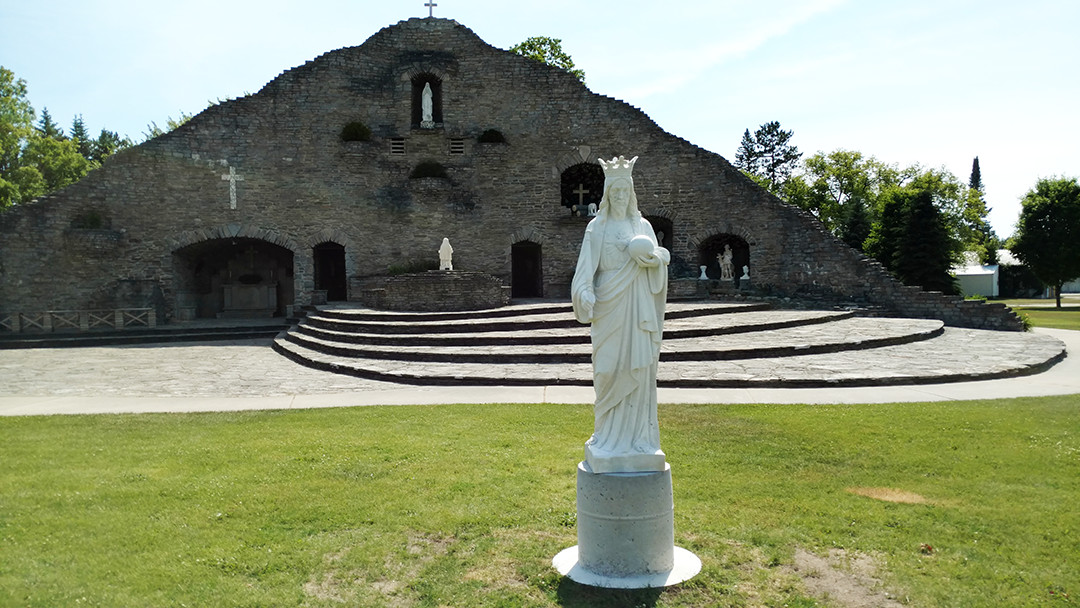 MIO – CATHOLIC STATUES remind us of the of the achievements and sacrifices of the saints. At Our Lady of the Woods Shrine at St. Mary’ Catholic Church – many of the saints are getting a makeover by renowned artist Chris Moran.

Combining his love for God and passion for art history, the human form, and preserving art for sacred places, Moran established Moran’ Art Studio Inc. in 1994. The studio is based in South Boardman in Kalkaska County.

Moran, 55, is nearly finished with the church’ 6-foot, weighing over 2,000 pounds, Christ the King statue (taking more than 200 hours between he and a part-time helper) and has started on the Our Lady of Guadalupe statue at the church. He said he will refurbish all the 31 marble statues as the funds become available.

‘I GET THEM AS close to new as they are going to get,’ Moran said.

Christ the King proved demanding. He said the statue was one of, if not the most eroded of any of his career statues that he has refurbished in 17 years.

‘It’ one of the worst I’ve ever worked on,’ Moran said noting the deterioration of the marble. ‘The greatest threat to statues are the algae.’

He said the marble statues are porous and plant life gets in the pores and ‘eats away’ at the marble. While algae are strong, Moran prides himself on being stronger. But, it is an endeavor that takes time.

FOR THE CHRIST THE KING statue, he had to carve away a quarter-inch of the marble to help deter further eroding. He expects to finish the figure on Wednesday.

While wanting the make the statue look brand new, Moran said there is also another challenge.

Knowledgeable in restoration, Moran toured across Italy to study various forms of art. He has restored more than 2,000 statues, altars, paintings, and art pieces for churches throughout the United States and Italy. Most of the art carved for Catholic churches in the United States are carved in Parisot, Italy.

MORAN SAID HE is enjoying his work at the church, as well as the community of Mio. While challenging it has been artistically enlightening.

‘This is one of the closest jobs I’ve ever had,’ Moran said, noting that he is often contracted to work in locations much farther than his home.

Moran spent 18 years in advertising. Then after leaving advertising, he made other connections. At one point, contracted with NASCAR. His paintings of some NASCAR drivers hang in their homes.

But he always maintained his faith and connection with God.

“I WANTED SOMETHING MORE. Through my (faith I) found my calling in church interior design and complete renovation.’