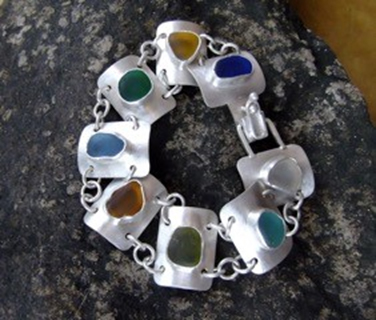 “I suppose I’ve always been an artist,” said Anthony, who grew up in southeast Michigan. “I was fortunate enough to attend Interlochen Arts Academy for three years, where I majored in music but then later turned to visual arts and metalwork, graduating in 1981.”

At Interlochen, he won a National Scholastic Achievement gold medal in metalsmithing for a copper bowl with a fabricated base that he still has.

Because he also had an interest in science, he studied medical technology for two years at Michigan Tech, “but then I decided it wasn’t for me,” he said.

So, in 1985, Anthony returned to his love of jewelry making and metalsmithing, starting to hone his skills through an informal apprenticeship at a jewelry store in Birmingham, Michigan. He later moved to California for ten years and then to Kauai, Hawaii, for 12 years. There he discovered a love for sea glass and began integrating it into his creations.

He returned to Michigan in 2012 to be closer to his parents, who still live downstate. He chose Roscommon as his new home base because “my grandmother had a log cabin on the river that we visited in the ‘60s and ‘70s. I’ve always loved the AuSable River, and I wanted to live there.”

He bought a house on the South Branch and works out of his home studio. “ As a jeweler it takes years to acquire all the equipment you need,” said Anthony. “I finally have everything, and with my studio in my house, I have enough space to spread out. I also like working at home because creativity can strike at any time, and I can capitalize on those times when I’m feeling creative.”

In addition to his jewelry creations, Anthony has expanded his metalwork into copper fish sculptures. Inspired by the flora and fauna of northern Michigan, he creates wall hangings of salmon and trout as well as embossed copper plates of grayling, morels and eagle feathers suspended in birch twig frames.

“I always leave the door open to new creative ideas,” he said. “Where I am always has something to do with my work; I like my locations to inspire my art.”

Anthony’s works are now on sale in the AAV retail shop at 219 Michigan Avenue in downtown Grayling. Winter-spring hours are 11 a.m. to 5 p.m. seven days a week. Shoppers can find a wide variety of art and crafts – including photographs, paintings, drawings, sculptures, jewelry, metal works, fiber arts and pottery – at the shop.

GREAT NORTHERN ART EXPLOSION
Watch for detailed information on the Great Northern Art Explosion, running July 19 to August 3 and sponsored by the Artisan Village and Paddle Hard Brewing. Downtown Grayling will become an art gallery during 15 days of public voting for a people’s choice award and eight juried category awards.

The call for artists is out now, with May 31 the deadline for submissions. The entry fee is $15 for members of the Artisan Village, Main Branch Gallery and Lumberyard Shoppes and $30 for non-members. For more information and to enter, go to www.aavart.org/call-for-entries.html.

PERFORMANCES
All regularly-scheduled performances are held at 7 p.m. on the second Thursday of each month, with concerts presented in April and June and the comedy improv team, Gits & Shiggles, appearing in May. Performances are free to the public although donations are welcome.

CLASSES
Plans are in the works for children’s summer classes (running June 24-August 15), and the gallery staff always welcomes ideas for classes and instructors. Contact Kathy Ellison at 810-252-5742  or go to www.aavart.org/classes.html to find relevant forms: “Submit idea for a class you’d like to take” and “Interested in teaching a class for us?”

MEMBERSHIPS
Memberships for 2019 are still available. Prices are $20 for individuals and $35 for families, and they run through December 31, 2019. Memberships can be paid at  www.aavart.org/membership.html using PayPal or a credit card, or forms can be picked up at the AAV any time. Membership benefits include a 5% discount on gallery purchases and invitations to members-only events.

Extra Mile donors (with donations starting at $120) are recognized with personalized plaques displayed prominently in the gallery.

“Donors can know they are supporting the arts in our community and the AAV’s mission to support art and cultural activities that enrich lives, stimulate creativity and serve as a catalyst for artistic excellence throughout Northern Michigan,” said Ruth Hankins, assistant director.