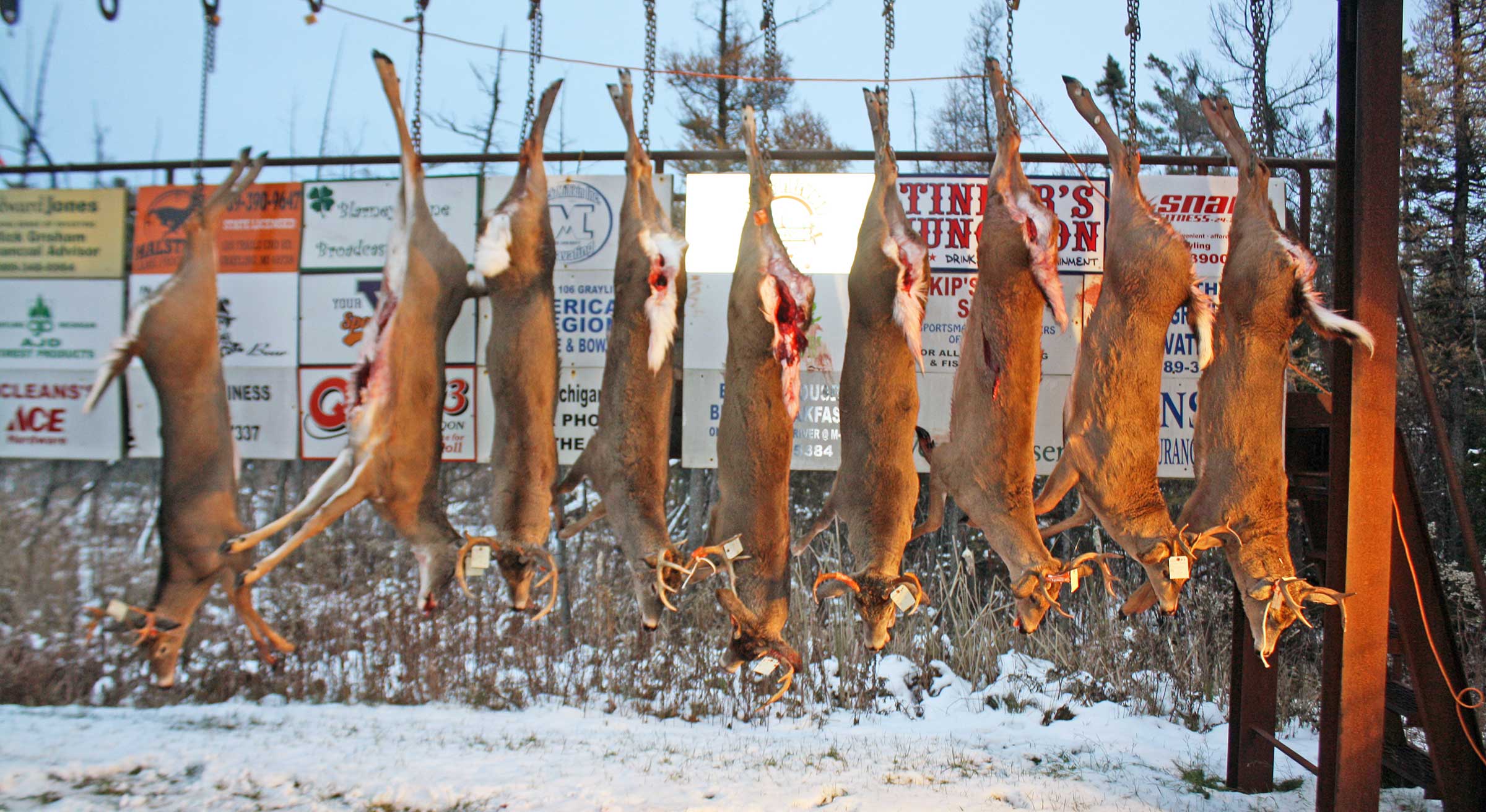 GRAYLING – The 60th Annual Grayling Buck Pole Opener is now in the books. Hunters at dawn were greeted with 5 degree weather, a covering of snow and clear skies. The weather channel was predicting a high of 38 degrees but it sure did not look probable early in the day. Hunters in the woods at dawn were certainly earning their opener bragging rights. The first deer came in at 7:50 a.m., exactly an hour sooner than last year. Last year heavy rains had a negative effect on hunters getting out of the woods. The first hunter, Ken Pilarski arrived with a 115 pound buck. Ken got his buck just before 7 a.m. south of town.

Next to arrive at 10:50 was thirteen year old Raigen Bowers.

At 11:30, with the temperature rising to 25 degrees, had two more hunters arrive with bucks. Nathan Rochette arrived with a buck scoring 102 ¼ followed by John Jackson who said that he graduated from Grayling High School in 1954. On his first try. John at that point was our oldest hunter.

After John came Nick Guymer of Harbor Springs with the heaviest buck of the day at 158 pounds. After Nick came Bay City native Tim Deshano with a 123 pound buck with a rack scoring 113. Next up was Matt Tuck who bagged a buck he had seen bow hunting earlier but never shot. It’s rack scored 128 and weighed 141 pounds. The oldest hunter on day one of 2017, Ron Rokoczy, came back with the eighth buck of the day. His buck weighed 121 pounds and had a rack score of 48. Minutes before the Buck Pole was closed for the day Steve Yaris of Commerce Township arrived with a 120 pound buck that scored out at 84 ¾.

Missy Millikin of Skip’s Sport Shop, stated “this year’s opener was much colder and hunting in bow season has been slow so you can figure that there are plenty of bucks out there yet”. At the end of the day nine deer were recorded compared to last year’s twelve bucks.

The second day of firearm deer season, Nov. 16, was a much warmer 30 degrees. Bucks arriving after 5 p.m. on the first day can be hung on day two but not on the first rung which is reserved for the first buck taken that day.

The first buck to arrive that was taken on day two was brought in by Mark Jacobs of Grayling at 9:30 a.m. His 140 pound eight point buck was his first buck in 30 years. The next buck brought in by Georgia Barber weighed 111 pounds and was a six point. Next Cody Collen arrived with a seven point weighing 131 pounds. A three point weighing 114 pounds was taken by eleven year old Brayden Lindh who is this year’s youngest hunter.

The Camp Grayling Conservation Club stops hanging deer at 5:00 and they are taken down at 7:00, giving everyone a chance to see all of the deer. For twenty-five years the Camp Grayling Conservation Club has sponsored and staffed the running of the Buck Pole. Hunters are awarded prizes in various categories such as first buck for the day or youngest hunter. The deer are not only weighed but the antlers are measured and a scoring system takes into consideration total spread, number of points, and length of points assigns a score used to determine the best Buck of the two days. The overall winner for the two days receives a new $500 scoped rifle. It is possible to win a prize in more than one category.