A Hidden Treasure in Crawford County 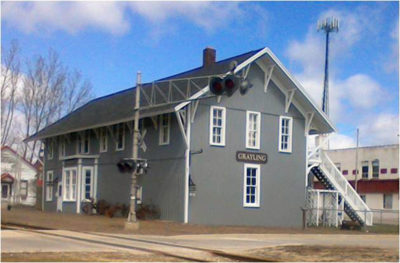 By Jim Smith
GRAYLING – Tucked away, yet in plain sight, on the corner of Michigan Avenue and Norway Street in Grayling is a red caboose. This hold over from days long past announces the residence of the Crawford County Historical Society and Museum.

Established as a non-profit in 1972, the museum is in the old railway depot, and several adjacent outbuildings that house the history of the settlement of the community originally known as Crawford Station. The main part of the historic collection is contained in the original railway depot that was built when the lumberjack was king in Northern Michigan.
Grayling was one of the collection centers for much of the logging done in the northern part of our state.

There are still many remnants of the early narrow gauge trains that reached into the forest to fetch logs to the mills. The Sailing-Hanson lumber company was one of the most active lumber processors shipping vast amounts of finished lumber as far as Chicago and the East Coast.

The museum was fortunate in recently acquiring the furniture and many original documents from the Sailing-Hanson Lumber Company and the hope is to recreate at least a portion of the original office as a permanent display. The Society’s major project for this year has been the salvation of the structure that houses the County’s military history from the Civil War on. This building is one of the oldest still standing structures in Grayling. It was built in 1883. It has stood on at least three locations in Grayling and has served as a school house, township office and a library.

Last year a new metal roof was applied. This year’s goal was to install vinyl siding and trim to the building’s exterior. Thanks to the timely generosity of several donors, including the Grayling Promotional Association, that project is scheduled to be completed in time for the canoe races. Concurrent with the exterior renovation, one of the museum Directors, who served in Viet Nam, has undertaken the task of completely re-constructing the displays to more clearly describe the part played by Crawford County volunteers from the Civil War through World Wars 1 and II, Korea, Viet Nam on into the Gulf Wars in all branches of service including the National Guard. This task will be ongoing for the rest of the summer but visitors are still invited to stick their heads in the door and share the members’ enthusiasm for this project.

There have been numerous other donations received this season including some antique railway hardware that reach back to the lumbering days. One particularly unique artifact is an eighteen inch wide bronze locomotive bell that is alleged to have come from a logging railway that ran from Deward to Alba. The Museum is open from 10 a.m. to 4 p.m. on Thursdays, Fridays and Saturdays as long as volunteers are available. The Museum also hosts school groups and other visitors by appointment. It is located on Michigan Avenue by the rail road tracks and just across from the Court House.