Kids and robots compete in Gaylord 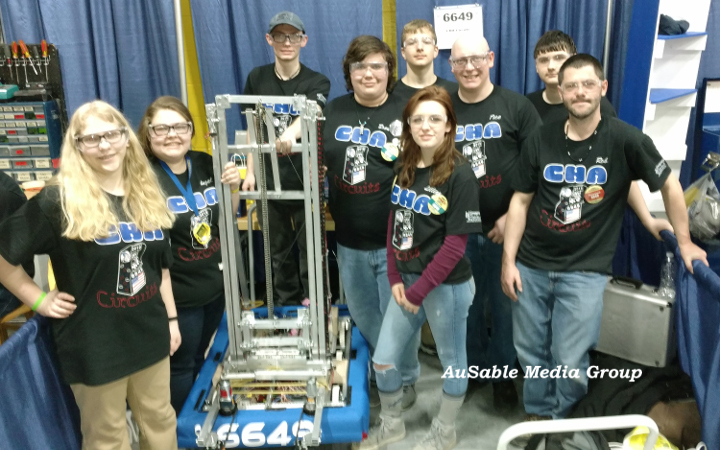 GAYLORD – Gaylord High School hosted a robotics competition on March 16-17. The Roscommon High School and Charlton Heston Academy participated, and a group of volunteers from the Grayling RoboVikes assisted with the setup and coordination of the event.

Behind the screen and running the joy stick is CHA’ Nathan Bonus. He is flanked by Coaches Robert Goscicki (left) and James Tice.

Brady Briggs and Josh Hinman (back) prep their robot for battle.

SAGINAW, Mich., April 11, 2018 – A competition of student-built and remote-control operated robots is helping spur interest in and pursuit of future high-demand science, technology, engineering and math (STEM) careers at the FIRST-« in Michigan robotics state championships, sponsored by Consumers Energy.

‘At Consumers Energy we know how important STEM careers are, because this talent powers many areas of our company,’ said LeeRoy Wells Jr., vice president of operations support for Consumers Energy and FIRST in Michigan board member. ‘Many of our recent STEM hires have prior robotics experience, so we know our support of this competition provides an excellent opportunity to inspire the next generation of Michigan leaders.’

The event is at Saginaw Valley State University’ Ryder Center today through Saturday, April 14, and features 160 high school robotics teams from across Michigan vying to win their matches and advance to compete at the world FIRST Robotics Championship in Detroit April 25-28.

In 2017 the Consumers Energy Foundation contributed more than $425,000 to support STEM programs, including FIRST teams at elementary, middle and high school levels across the state. With help from the foundation, FIRST in Michigan now boasts 500 high school teams, more school robotics teams than any other state.

‘FIRST Robotics has grown rapidly at all levels, thanks in large part to the support of Consumers Energy, a company that recognizes the importance of encouraging a new generation of youth to explore all that the STEM has to offer, personally and professionally,’ said Gail Alpert, president of FIRST in Michigan. ‘As we like to say, FIRST is the only varsity sport where every kid can go pro, and Consumers Energy helps nourish that K-12 pipeline that leads right into their company.’

Highlights of the three-day state event include:

-+ Team competitions Thursday through Saturday within the Ryder Center.

-+ A Dean’ List reception on Friday evening, hosted by Consumers Energy President and Chief Executive Officer Patti Poppe, where outstanding robotics students will be recognized at this event which is named after Dean Kamen, founder of FIRST.

-+ A visit by Michigan Gov. Rick Snyder who has made FIRST accessible to even the smallest of schools through a state grant.

Many of the skills and tools needed to perform jobs at Consumers Energy are the same students learn through their FIRST involvement. Examples include:

-+ The use of a robot, called a ‘pig’ that performs in-line inspections of natural gas pipeline that would otherwise be difficult and expensive to excavate. The pigs feature cameras and also record data from inside the pipe to ensure safety and reliability.

‘Consumers Energy’ mission is to help create sustainable FIRST robotics teams at every school in Michigan, and to cultivate future STEM careers,’ Wells said. ‘We want every interested school and student to be able to participate, from the largest to smallest schools, to those in rural areas and those that are under-resourced.’

FIRST – For Inspiration and Recognition of Science and Technology – was formed in 1989. FIRST has engaged millions of people in a global movement to build problem solvers who transform our world. Each year the FIRST community celebrates young innovators through high-quality, inspiring, life-changing experiences, the culmination of which is the FIRST Championship.